Welcome to this month’s World Tour! Bring out your beers and your Bratwurst, and let’s get going!

In Aguirre, Wrath of God, we follow the ‘insane’ Don Lope de Aguirre as he leads a group of 16th-century conquistadors into the jungle to look for the mythical El Dorado, city of gold. As the journey continues it gets increasingly perplexing as the men continue to press on with their mission, driven by promises of wealth and glory. While never defined, it’s clear that this “madness” is a metaphor for the colonial mindset and Herzog gives a pretty interesting evisceration of it that is worth analyzing.

The preeminent feature of the colonial mindset in this film is obsession. From the moment their expedition starts, Aguirre is plotting his hostile takeover, slinking through the ranks to make the circumstances for the pursuit of his obsession. There isn’t a particular logic to it either, it’s all predicated on a fantasy of a place based on rumors and myth that we (as the audience) know doesn’t exist. The jarring editing breaks up your sense of sequence and disorientates you. This emphasizes how this is a journey of faith, not cold logic. Each of the colonizers have different creeds. For most of the men, it’s the promise of gold. For some, it’s a religious venture. For others, it’s sovereignty. For some it’s glory. For the slaves, it’s the chance of freedom. The lines between these are deliberately blurred, excuses, lies, faith – they all merge into a singular obsession. This is something we can see paralleled in neo-colonial efforts today. If Western nations invade out of a desire for oil, some pursuit of “freedom,” a modern-day crusade, or national security – the result is the same . . . it all folds into blood, domination and rubble. 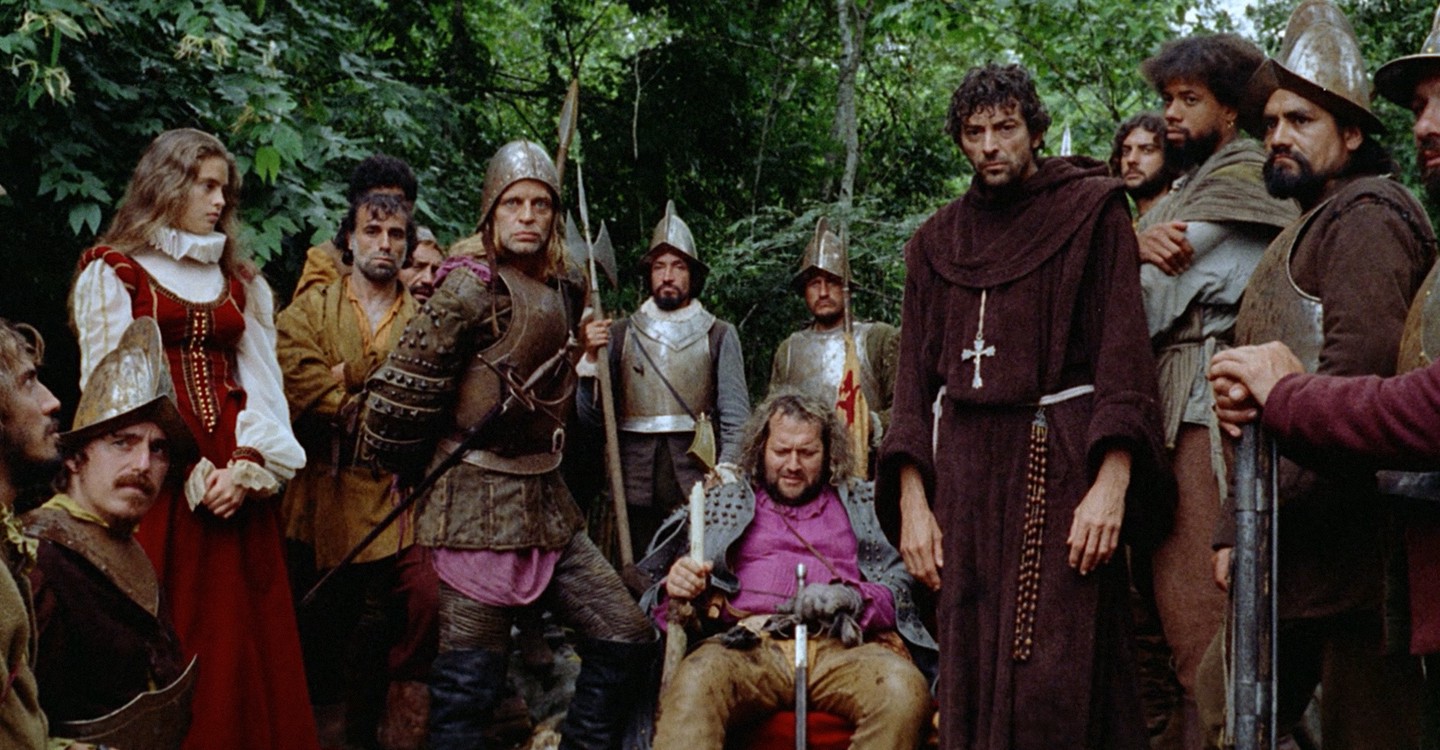 Herzog also demonstrates the destructive nature of colonialism. Everywhere these colonizers go they leave a trail of wreckage behind. They kill the natives. They kill their appointed leader. They burn a village to the ground. They abandon their horses to die in the jungle. No matter how much it gets wrapped up in dogma or religion, violence is the only language that colonialism knows. In some ways Aguirre is like a disaster capitalist, everything around him is being destroyed (by his own hand), but instead of encouraging him to stop, he finds a way to make the chaos work for him. Each pointless death becomes a martyrdom through which he can push them to keep going. All that matters is increasing his dominion, “Even if this land consists of only trees and water – we will conquer it.”

The colonizers in this film are full of self-aggrandizement. They talk of God and kings and gold, but Herzog effectively shows how pathetic they are in actuality. The subtlest way this is done is through the opening, where we watch the mostly silent trudging of these invaders through the jungles. Instead of being glorious and bright, it’s absolutely miserable. Everything is muddy and disorienting with random cannon shots in between. We often pull out to wide shots that show just how small these men are compared to the magnificent landscape than encompasses them. The contrast between the grandeur the land and the awkwardness of the men makes them feel more like amateur historical reenactors struggling with clunky costumes than brave heroes fighting for glory. At every possible point, we are shown how these men are completely unequipped to deal with the environment, and suffering for it. Every time they try to take dominion it becomes ridiculous. Their raft is a pathetic hodgepodge of wooden logs and hastily crafted nails carried at the whims of an unforgiving river. They appoint Don Fernando de Guzman as king because of his proximity to aristocracy back in the home country, giving him a pathetic throne and even having a show trial which is ultimately just an excuse to discipline a political enemy. After they invade a village, the colonizers end up licking the natives’ salt off of the floor out of desperation, even as they are under attack. There is no power or glory or might given to colonizers here, they are instead reduced to their truest form. Violent killers rolling in the dirt, desperately consuming the riches they haven’t burned yet.

There’s an infectious lure to colonialism which Herzog captures pretty well, with Klaus Kinski’s star performance as the wormtongue Aguirre. He convinces the rest of his peers to keep traveling into almost certain death and, in the few moments where his piercing blue eyes look dead into the lens of the camera, he almost gets you. And in many ways, the colonial mindset does actually affect Herzog. Even in his righteous effort. Herzog repeatedly others the indigenous people. They’re cannibals, servants, an existential threat – but they’re never humans. One of the few times their language is translated is when they’re screeching “floating meat” as the invaders drift on the open water. The virulence of this racism actually allows for a message that he clearly didn’t get when he was making this film – that without self-reflection we can still reproduce the systems we rail against. This is pretty reflective of a broader issue in Germany (and other Western states), where there is a cultural amnesia about the role they played in colonialism and the ways that colonial mindsets are fundamental to their cultural consciousness. 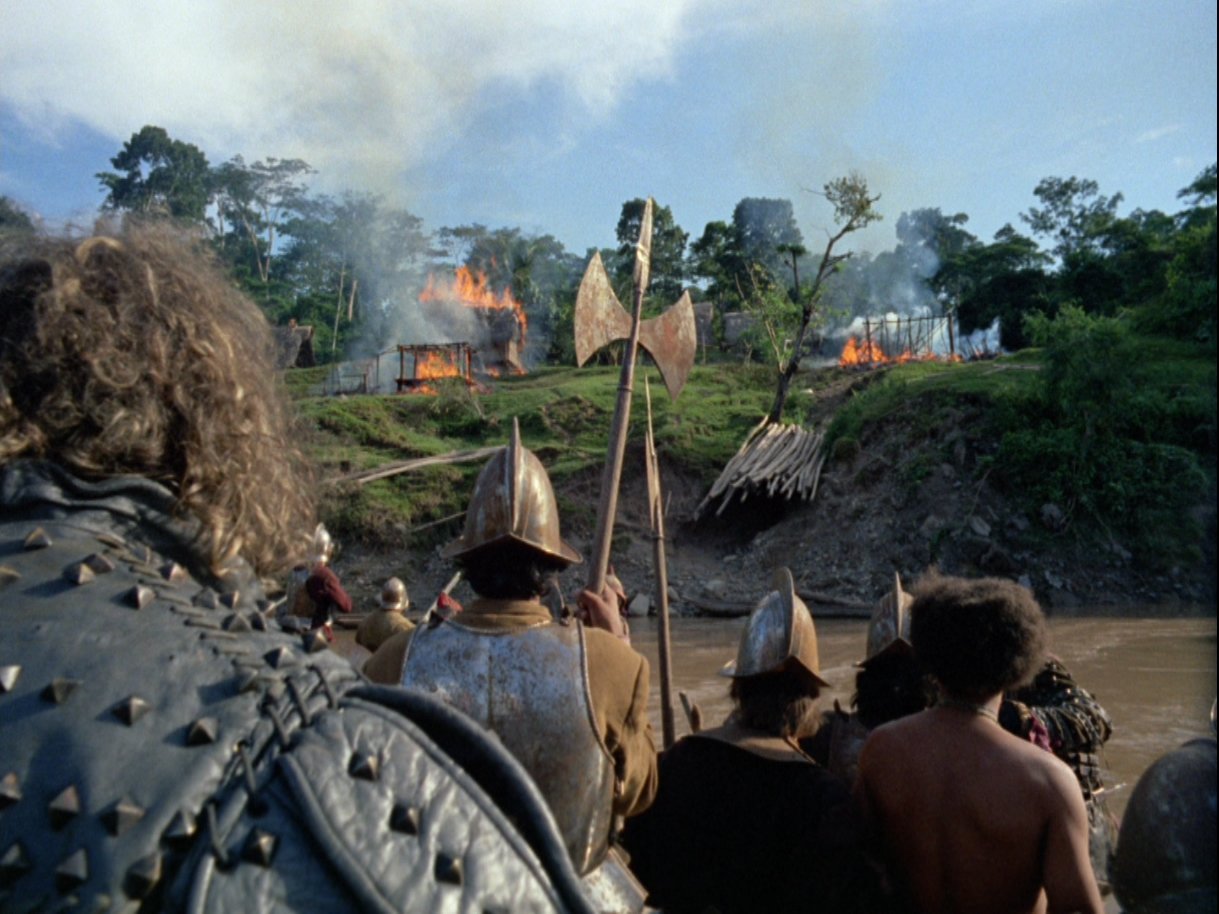 It is impossible to exist in this world of the colonizers and the colonized without those attitudes affecting you somehow. It is however, your responsibility to do the work and decolonize your mind. I include myself in that, as someone who is both colonized, but also born and raised in the land of one the most ardent imperialists. There’s a way in which this column could very easily become a gross kind of cultural tourism, where I pretend a little research makes me the expert on complicated national histories, reducing and aestheticising them for the (predominantly) Western gaze. I try not to do that and hopefully succeed.

Regardless, the point is we have to do the work of unlearning, Colonialism doesn’t just come in a funny hat and shiny armor – sometimes it comes with a camera and a pen. 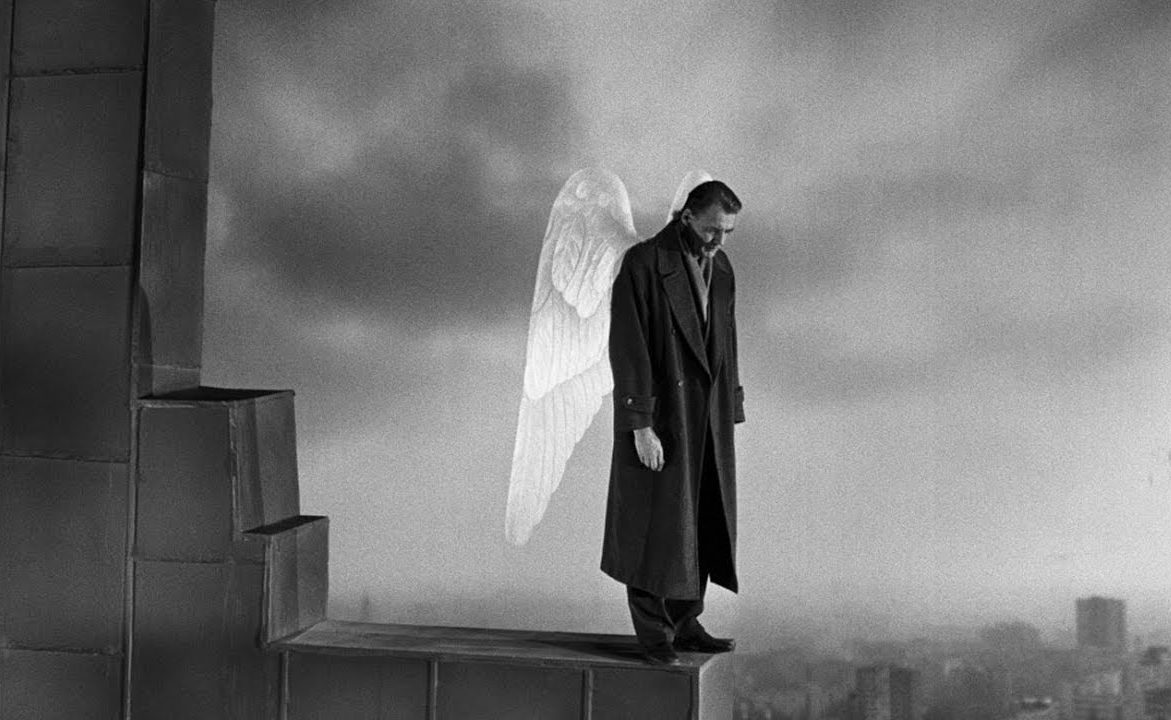 Written and directed by Wim Wenders, Wings of Desire follows an angel Damien (Bruno Ganz) in West Berlin as he grows sick of watching over the world from a distance and falls in love with a mortal.

So much of this film is just people watching. A man smokes in his room. His dad sits in the living room reading the newspaper. His mum sits in the kitchen cleaning up. A couple meet outside a showroom. People read in the library. Others fidget on the train. An old man remembers the world before the wall and tries to chronicle it. The city moves, the city breathes. The city lives, the city dies. Everything happens at once and you get to watch – hearing the thoughts people are too scared to say aloud.

These thoughts have so much insight and power, easily being the strongest part of the film – but one from a taxi driver hit me hardest:

“Are there still borders? More than ever! Every street has its borderline. Between each plot, there’s a strip of no-man’s-land disguised as a hedge or a ditch. Whoever dares, will fall into booby traps or be hit by laser rays. The trout are really torpedoes. Every homeowner, or even every tenant nails his nameplate on the door, like a coat of arms and studies the morning paper as if he were a world leader. Germany has crumbled into as many small states as there are individuals. And these small states are mobile. Everyone carries his own state with him, and demands a toll when another wants to enter. A fly caught in amber, or a leather bottle. So much for the border. But one can only enter each state with a password. The German soul of today can only be conquered and governed by one who arrives at each small state with the password. Fortunately, no one is currently in a position to do this. So . . . everyone migrates, and waves his one-man-state flag in all earthly directions.” 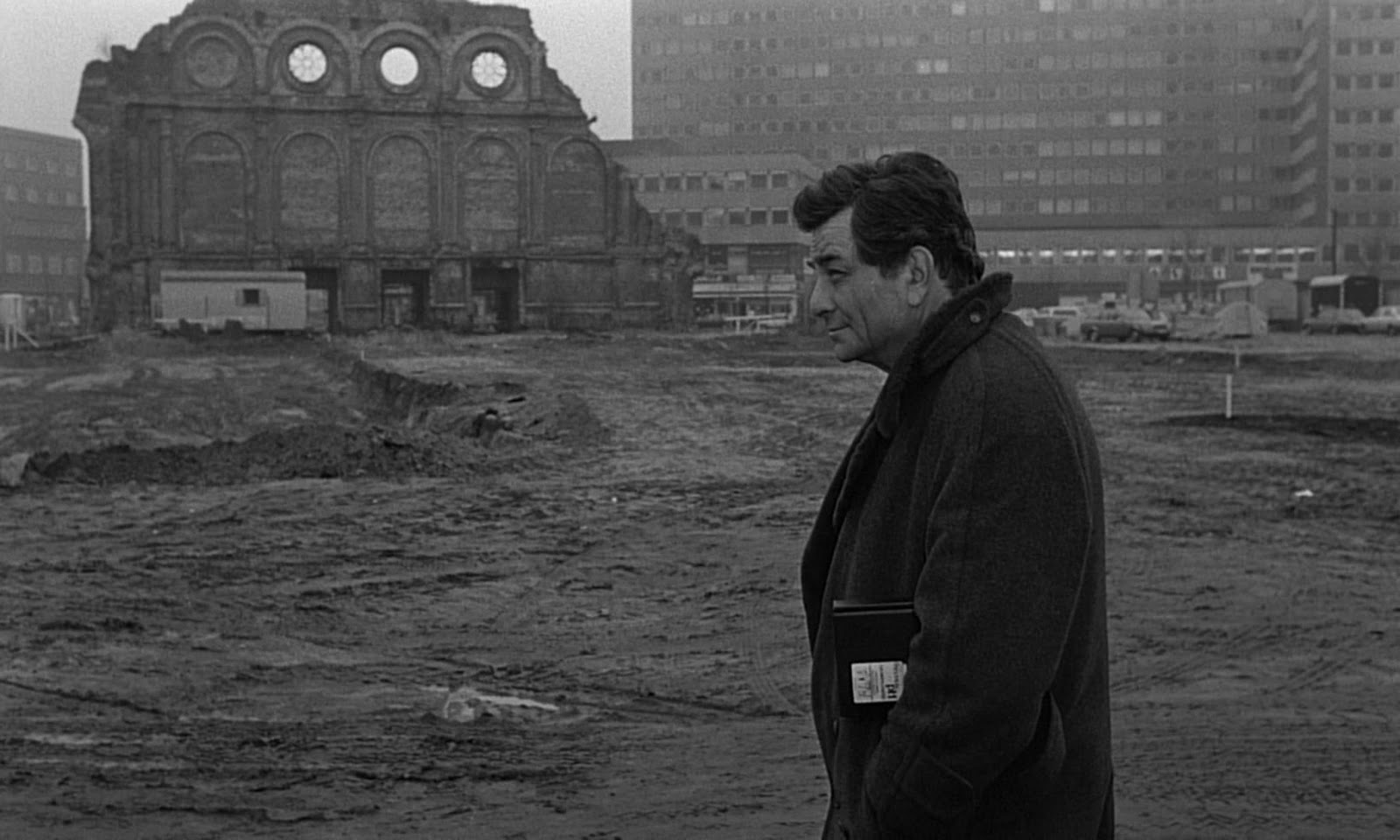 I think that’s something which struck me personally about this – especially in 2020. I detach from things a lot and retreat into my own ‘small state’ – this year more than ever. I don’t think I’m alone in this, and why we do it makes sense. Sometimes it’s for safety. Sometimes it’s ignorance. Oftentimes I just have nothing left in the tank to give anymore. Living in the world is hard enough, especially as a marginalized person. But during a pandemic that is running rampart through the communities I hold dear? A year where general acts of violence against those same communities has actually spiked? It often feels impossible to take another step – and I am nowhere near the most materially hard-hit.

The key to Wings of Desire is pointing out the little things that make it worth staying present. It’s the warmth of a cup of coffee, the wind on your face, kids running in the street. It’s seeing the limits of your humanity and finding a way to make that worth it. That’s never easy, or simple. More often than not it fucking hurts – especially when there are a bunch of systems specifically designed to torture you. But if there’s anything this year has shown, it’s that we need each other now more than ever, and that’s all we can rely on.

We’ve “been outside long enough, absent long enough” – and it’s time to break down the walls.