This month I’m starting this column with some honesty. No jazzy intro. No corny joke about Jollof wars or any of that.

When I got invited to write this column I thought – great! I’ve got a place where I don’t have to write about the various interlocking ways society is actively trying to kill me every day. This could be a breath of fresh air, some respite from the constant feeling that selling trauma back to the systems that inflicted it was the only thing I could offer.

And it’s true! I could write about practically anything right now, there’s no gun to my head, no script, no teleprompter and I still can’t avoid it.

I can’t stop thinking about how Jacob Blake was shot in the back seven times. How excuse after excuse was made for the people who shot him whilst he lay paralyzed and handcuffed to his bed. How any “justice” within the current systems will be incomplete. How incidents like this are a feature not a bug.

And I’m thinking about how the Windrush Generation remain uncompensated. How Grenfell burned and nothing changed. How if/when I am killed, they’ll have to figure out how to squash my name into a hashtag that will fit on grifter’s shirt.

The worst thing is I could write this any month of the year. Just a quick “Find and Replace.” Dates, names, places, they’re practically interchangeable. Who would even notice?

I want you to understand that I could lie to you in this column and pretend that I’m okay. In future I will. I’ll tell you that small lie of omission I tell every time I don’t give you this preamble. But for once I am offering you an honesty and vulnerability I rarely give myself.

I’m telling you that I could barely bring myself to do this. That I stared at a blank screen waiting for more to appear through the vague grey haze. I tried to research, read, do all the things I was excited for a few weeks ago, and I just couldn’t.

Maybe that’s a failure. Toni Morrison said “The very serious function of racism is distraction.” So by getting caught up in it I’m losing. Adding one more point to the overwhelming lead that white supremacy has in this rigged game.

Or maybe it’s a success. Maybe writing these words out is self-care. Turning the vague and emotional into something tangible. Taking a cue from Baldwin because “’Not everything that is faced can be changed, but nothing can be changed until it is faced.” So I’m facing this pain by making it productive. Or maybe that’s just the capitalism brain worms speaking again.

So in this haze of feeling, I’m splitting the difference. I’m still giving you one of the pieces I originally intended – on The Burial of Kojo. Not for you but for me, because I have to believe that there is room for Black existence beyond anger and grief. That we can imagine, that we can dream. Otherwise, what is the point of it all?

Or maybe that’s another lie, laundered through the words of the dead. I guess we’ll never know

The Burial of Kojo tells the story of a little Ghanaian girl from a remote village who tries to rescue her father after he goes missing. When you watch this play out on screen, it would be very easy to describe the style as poetic. But what does that actually mean?

In the lens of a camera,

To let your audience fill

the gaps with their minds.

Or it’s straightforward. Ebbs and flows. Time becomes putty in the hands of a master, a living rhythm on the silver screen.

So when I talk about the poetry here I want to be specific. The closest comparison in any specific form would be a ballad, or maybe a broader narrative spoken-word piece – but even that’s reductive and limitingly Western. The more accurate comparison would be the tales of the oral cultures of pre-colonial “Ghana” being presented on screen. Fables passed from generation to generation, explaining the world that we know and the forces that lurk in the “the real in-between.” 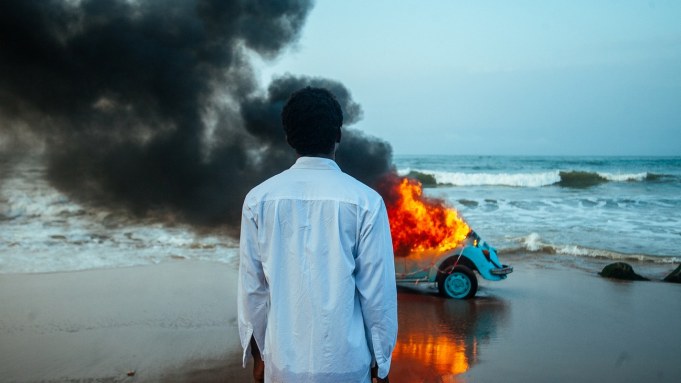 As with most poetry, you have your striking images. The most powerful of these is the Crow. A seemingly malevolent force, ruler of the realm in-between, they lurk around every corner, waiting to take the sacred dove. Here they are represented by someone in an imposing (and incredibly cool) plague doctor-esque costume. Whether it’s a blurring of the lens, the stunning colored smoke which surrounds them, or lighting in silhouette, the Crow is never allowed to feel fully present or tangible. There’s always a degree to which they’re something abstract and beyond our perception. A force, or maybe even an image – but not a worldly being.

There’s also the water. Ripe with animistic energy it surrounds the village where our protagonist resides. Michael Fernandez’s camerawork makes this water stunning in the daytime and the moonlight, feeling almost endless. More than just a body of water, it’s a quasi-mythical barrier which tries (and ultimately fails) to protect its residents from external forces like the neo-colonialism that slowly encroaches in just beyond the water’s edge.

However, what moves this from poetry in the general sense, to the specific poetry of oral cultures lies in its sense of fracture. We’re never presented with any sort of singular objective narrative; instead, we get an assembling of glued together fragments from our narrator’s memory. Dreams, overheard conversations and childhood imagination carry the same weight as direct experience and are inseparable from it. This isn’t the story written down by a chronicler, it’s the tales of days gone by that you hear on a grandparent’s lap, complete with all the gaps and paradoxes. Crucially, much like the ever-shifting oral tales it replicates, the film doesn’t see this fracture as a place of loss, but as a place of creation and collaboration between past and present. The embrace of this allows for impressionistic breaks from reality. There’s a real instability created in the camera suddenly becoming handheld and shaky, or the frame being flipped upside down. The break from reality also enables glorious uses of color, like the uses of purple throughout that drip with magical beauty. 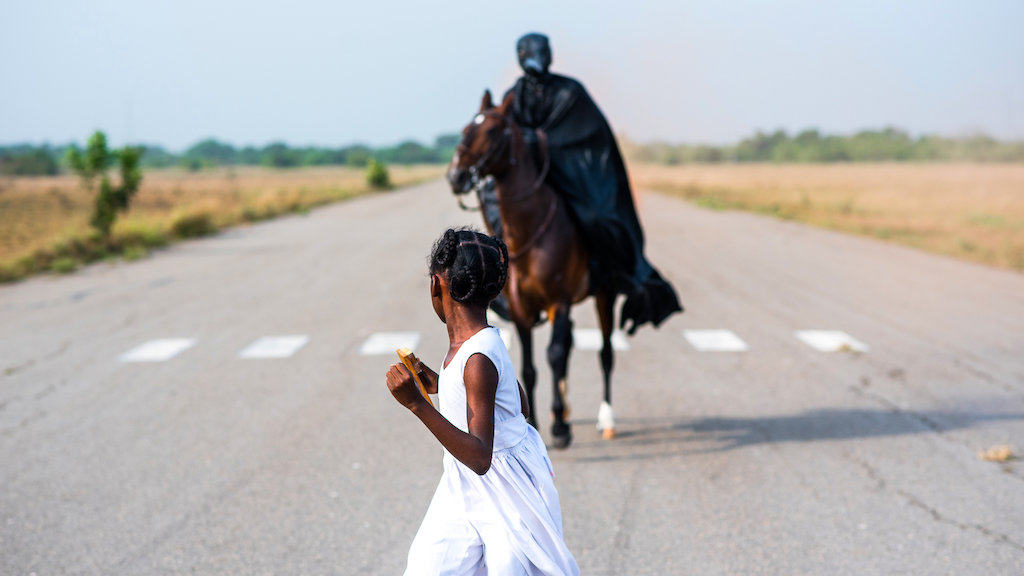 Part of what makes this particularly notable is the context of the films which surround it. The Burial of Kojo is situated within a new wave of African film that seeks to establish itself as a legitimate force on the world stage rather than just fodder for memes. This includes films like Rafiki, Lionheart and The Wedding Party, which have much cleaner productions than their predecessors and are generally more legible to a wider audience. Whilst many of these films are great, there is a tendency to take “better” to mean “more Western,” so a lot of this new wave ends up hewing closer to mainstream American cinema in a way that I find kind of frustrating. The Burial of Kojo is a complete departure from that, forging its own path by embracing the fragments of the past to create something better.

In a sense that’s all we can do as Black people living in a post-colonial world, take the fragments that weren’t erased and craft an identity out of them. What The Burial of Kojo shows is whilst we can mourn the point of fracture, it’s an opportunity for creation if we take that leap and dare to dream.

The Burial of Kojo