Demon’s Souls (2020), much like the other great roguelike of 2020, Hades, is far too relatable during quarantine. Watching my character struggle and fail against a horrible situation created by a self-interested leader mirrors my own hardships and growth during this pandemic. However, unlike Hades which imparts the idea that you can take little steps to make a bad situation better by improving relationships, a player can beat Demon’s Souls and conquer the trial before them.

Demon’s Souls might not be the best representation of how to make life better during this struggle, but it’s the fantasy that’s appealed to me the most during the COVID-19 pandemic. Demon’s Souls characters gave me a sense of solidarity that I wish I had more of, its mechanics give me the human interaction I miss, and the game gave me the catharsis of beating the pandemic and holding those who let it get this bad accountable — a sensation that’s probably going to elude me in the real world. Bluepoint’s Demon’s Souls remake isn’t just the perfect game to kick off the PlayStation 5’s lifecycle, it’s also a source of inspiration during this pandemic. 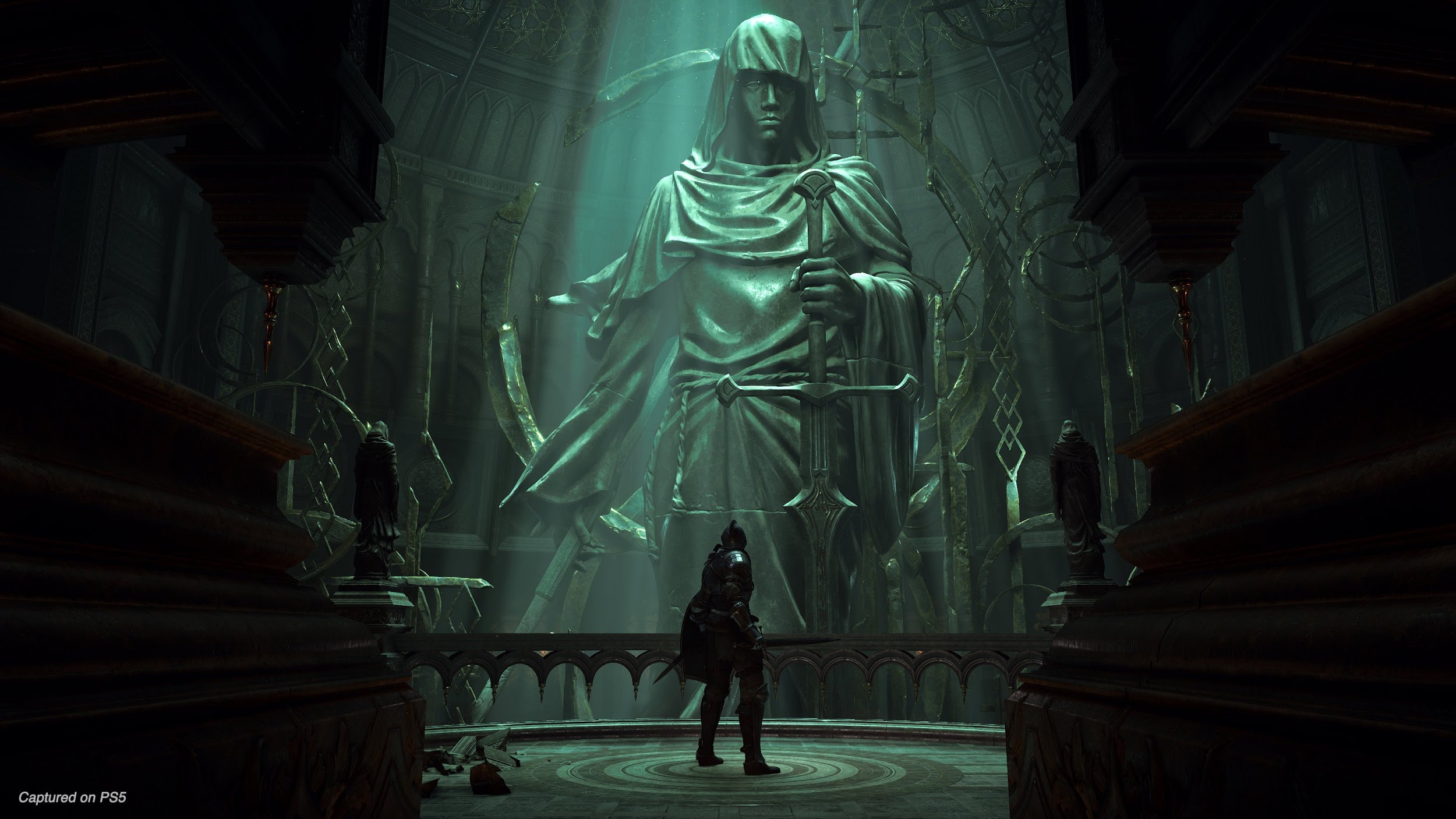 For those unfamiliar, Demon’s Souls takes place in a fantasy world that’s plagued by demons after an eldritch horror known as the Old One is awoken from its slumber. The player takes control of a character who chooses to enter into the deep fog created by the Old One and attempts to free the world of its demonic plague. Shortly after starting this quest, the player character dies and finds themselves in the Nexus, a hub that connects the games various levels and exists in-universe as a means to give humanity a fighting chance against these monsters.

There’s a moment in Demon’s Souls, about twenty or so hours after this initial set up, when the first desolate Nexus is filled with a few of the NPCs that the player met over the course of their journey. It’s in this moment that I felt a deep connection with all these characters as they too were struggling against the unnecessarily wrought chaos in their own way.

Stockpile Thomas is desperately trying to find a place in a world that he doesn’t fit into anymore after the loss of his family. The naive and idealistic Ostrava is trying to find some explanation for how the people and systems he believes in could let demons destroy his home. The opportunistic Sage Freke is trying to make the most of the situation and quickly accepts this demon plague as the new normal. Then there’s Patches the Hyena, who is relatively unaffected by the demon scourge and still ripping people off like he seemingly always has.

Props to Patches for keeping his hustle going, even in the apocalypse.

Unlike later “SoulsBorne” games where the player is a chosen hero struggling alone against a cataclysm millennia in the making, in Demon’s Souls you’re just one more person trapped in a bad situation. You’re one of a bunch of people trying to pursue their own goals or just get by while dealing with an unprecedented problem. This moment is powerful because, even if it’s fleeting and doesn’t even encompass Demon’s Souls’ full offering of NPCs, it captures the collective struggle these characters are facing mostly on their own.

We don’t really get this intersection in quarantine, as our own plague forces us apart. We’re left to stew in the hardship and struggle of this pandemic mostly by ourselves, even if we know intellectually that everyone’s going through the same thing. I wish my life had more quiet, passing acknowledgements of how tough this all is, even if they didn’t offer any material benefit. At least then I wouldn’t feel like I’m alone in all this.

Also, remember how cool it was to just passively be a part of a stranger’s life for a little while? To share a brief laugh and a nod with a stranger you pass in the park who just happens to be wearing the same shirt as you, or to have a five-minute conversation with someone in a bar knowing that this is the only time your lives will intersect? These are really small human experiences that end up being a big part of life, and Demon’s Souls nails exactly how they feel.

I wish the plague I’m living through allowed for these fleeting moments of human connection, but Demon’s Souls does a great job satiating that desire and giving me a sense of solidarity. It reminds me that we’re all in this together. 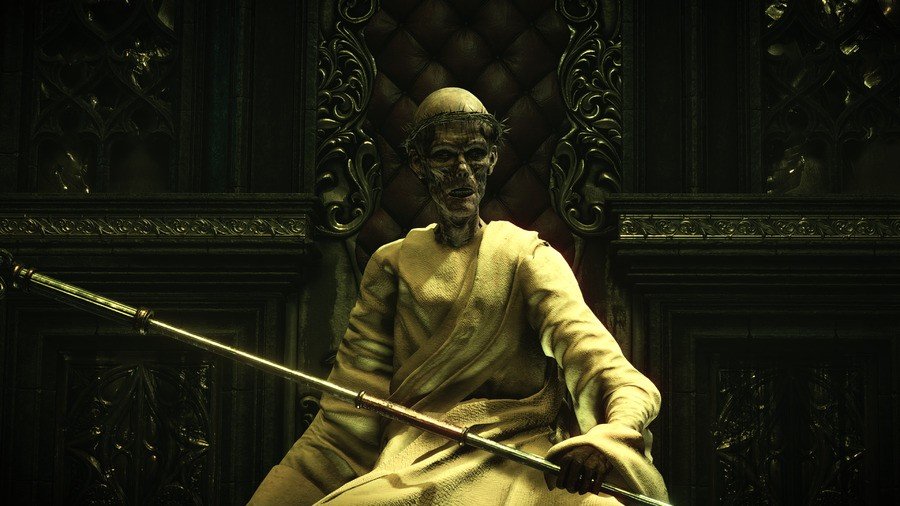 Of course, Demon’s Souls mechanics also remind me that other people are struggling against the same challenges that I am. FromSoftware’s “SoulsBorne” games are famous for their asynchronous multiplayer, which puts players in a server together with limited interaction. In this game you see phantoms of other player characters struggle through the level you’re in, can read messages left by other players, summon other players to help you, and even fight against players who forcibly invade your game. These might seem like relatively straightforward design elements, but they can capture a wide scope of human interaction.

Helpful messages alert players to traps and secrets, while deceitful ones are frustrating at best and lethal at worst. Similarly, a summoned ally can prove vital during a particularly tough boss fight, while an invader can quickly end a run with a sudden backstab. This game lets me engage with strangers in ways I simply can’t right now, and it’d be amazing if I could causally interact with people again without having to schedule a Zoom call or find a night when everyone’s free for virtual poker.

These systems also allow for weirder experiences, like when my game was invaded while I searched for items in Upper Latria. I had just defeated the level’s boss and was searching to see if I could now get to any previously hidden areas when the game notified me of another player’s presence. Not wanting to die and potentially lose my chance at finding hidden loot, I quickly searched for them and found my invader approaching me on one of the level’s many narrow walkways. Having avoided invasion due to my limited experience with “SoulsBorne” games, I figured this player must be pretty good and fired a Soul Ray at them as soon as they were in range.

They dodge rolled off the walkway, fell a few dozen feet, and died immediately. I was so flabbergasted that I put my controller down and spent the next few minutes trying to workout what just happened.

We can’t have weird interactions like that in the real world right now, largely because social exchanges have to be planned out more than ever and because most folks are rushing through small ventures into public spaces to minimize their exposure risk. I miss having odd, one off encounters with people in my daily life and getting a story out of those exchanges. I didn’t even realize that I missed them much until this happened to me in Demon’s Souls, making me think that the game’s supernatural blight might be more enjoyable than ours.

What really makes me think that Demon’s Souls disaster is better than our own is the catharsis I got from beating its final boss. The rise of demons in the game is caused by the ruler of Boletaria, King Allant. He awakens the Old One in an act of greed and selfishness, believing that it’s humanity’s fate to perish to the demons even though he will escape that fate as a vassal of a primordial entity. He even fashions a demon in the shape of his ideal self to preserve his image as a glorious ruler and feed his own ego.

Here in the US, an estimated 460,000 people have died due to COVID-19. Things are this bad largely because former president Donald Trump and his administration ignored, denied, and even removed measures to prevent the pandemic. It even appears that some Trump advisors even wanted people to contract this deadly virus. Despite all these deaths resting on this administration’s hands, they’ve yet to suffer any repercussion beyond losing their reelection bid and Trump himself still remains an almost god-like figure to his most fervent supporters.

When you finally encounter the real King Allant at the end of Demon’s Souls he’s a misshapen blob and the easiest boss in the game.

More so than any other experience in Demon’s Souls this final fight gave me a feeling I desperately needed in quarantine. More than the leveling system that made me feel like I was improving and growing from this experience, more than the intricate level design that mimicked actually discovering new places; defeating King Allant and ending his plague was nothing short of emotionally fulfilling.

Just like Trump, King Allant spent so much time and effort building himself up as a grandiose leader and ensuring that he would hold a status that put him high above the masses. When the game finally pulls back his curtain, Allant is practically nothing. He’s just a pitiable, detestable, thing that’s barely human anymore, just like Trump.

I don’t know if the U.S. government will ever hold the Trump administration accountable for their mishandling of the coronavirus pandemic or their many other deplorable actions, but these last four years have left me with little confidence in our system’s ability to punish those in power. I don’t even know if the US government can distribute vaccines quickly enough to end the pandemic on their proposed timetable. That’s why beating King Allant and ending his scourge felt so amazing. It gave me the chance to personally enact the change I’d like to see in the world.

Demon’s Souls is a fantasy, and I know that it’s problematic to dwell in this kind of escapism when there are tangible things I can do in my life to make the world better. However, this fantasy hits me really hard right now because it presents a better version of what I and a lot of other people are going through right now. Getting through COVID-19 was always going to be hard, but Demon’s Souls shows how things could be different and made me feel a lot of what I’m missing out on during quarantine. That’s why this game is going to stick with me for awhile and why you should play it…if you can manage to hunt down a PlayStation 5 or force yourself through a very rough PlayStation 3 experience.

I promise Demon’s Souls is well worth the effort either way, though.

Little Nightmares II and the Case of Weak Imagery