There were many times this year in which I felt stuck in place. I would start my day, follow the same routine and then go to bed at night mainly to think. It took me a while to fully grasp the situation. To try and understand that I was in lockdown for the foreseeable future, seeing nothing but bad news on social media and waiting to hear about the inevitable extension every 15 days from the government. I kept on thinking when exactly all of this would end, when that precious moment of realizing that you’re finally over an awful life event would finally arrive. For a while, nothing changed.

2020, I think, was the year in which I felt terrified about the future. A lot of worries that had suddenly never had come to mind before now haunted me on a daily basis. Going outside turned dangerous. Getting close to others was prohibited. We all suddenly had to wear masks and use gallons of hand sanitizer to buy groceries. The people I cared about were all on the same page and I had no idea when I was going to see them again. Drowning myself in work helped me to have a reason to get up from bed, with the cost of strengthening some of my worst habits. I admit that, for a while, it was hard to motivate myself to keep my head up and look forward to a better tomorrow.

It’s always like this. We go through periods of time where everything seems to be final. We survive literal hells in ways that are hard to describe, only to look back at them and breathe with ease and enthusiasm. Most of the time there’s a new calamity waiting around the corner because as we all know life can be like that, but we get to enjoy the in betweens, regardless of how long they last. This year, though? It felt different. I couldn’t see a way out of this.

Now, I’m not writing this from a post-COVID-19 reality or anything alike. The situation, by and large, has remained the same, if not worse, depending on the side of the world from where you’re reading this. But we have been through almost 10 months of this already. It seems it was possible for time to move on, after all, even in a year like this. And I take that as a reassurance that we’re slowly marching somewhere.

Thinking about this has led me to sympathize with the people in The Banner Saga. The premise is gloomy right from the start: the gods are dead, the sun suddenly stops in the face of a long winter and, to make things even worse, a mender called Juno shares a bad omen. She has received a prophecy from the Serpent, a terrifying creature of colossal scale.

“I am the end. Do you understand? This world, and this tapestry, I would devour. It is my purpose.” 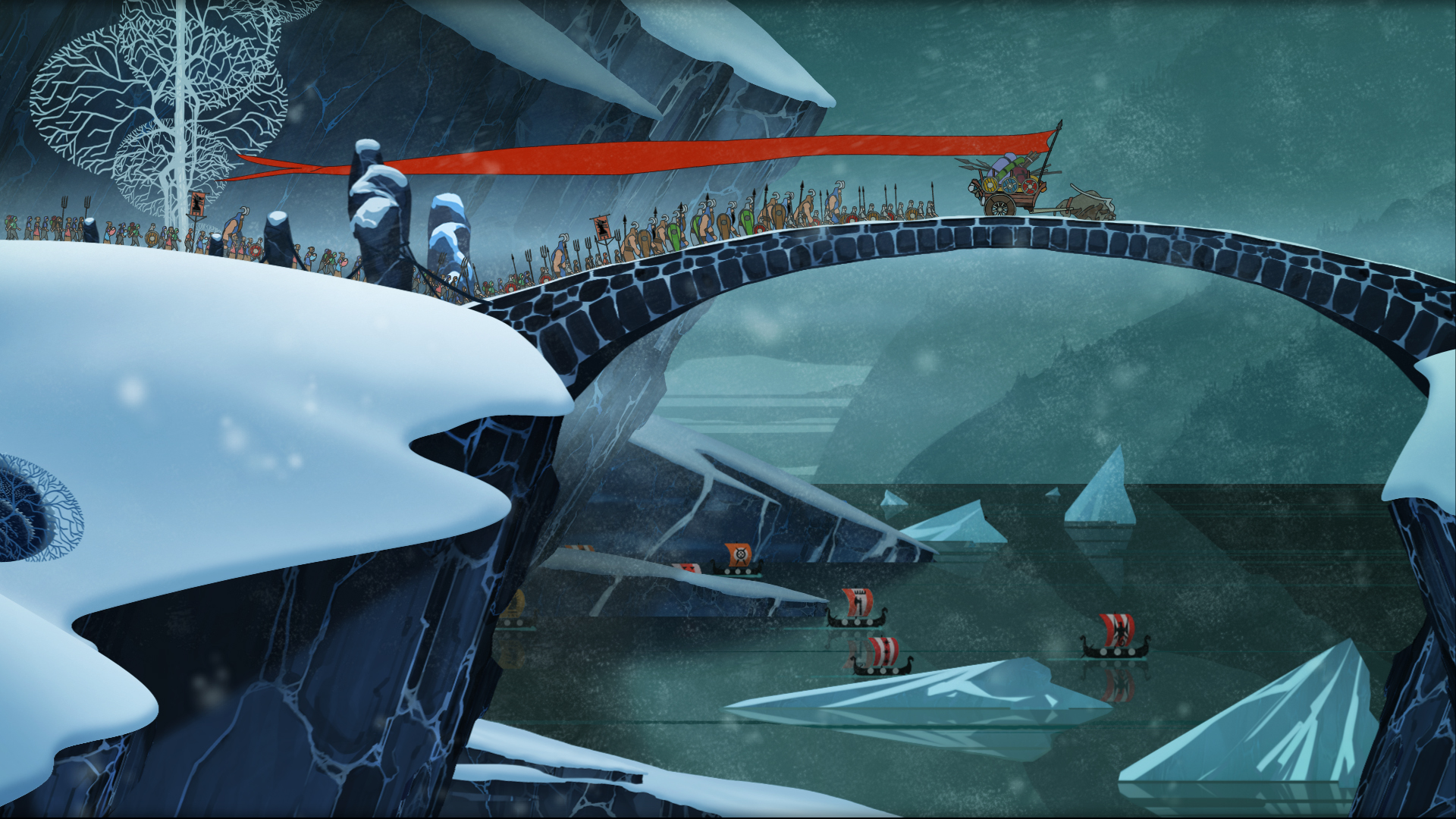 The main characters are split into groups, each carrying their own banner and leading a caravan through mud and snow. Step by heavy step, they march towards familiar places in hopes to stumble upon a face they recognize so they can make a stop and spend the night thinking, planning ahead. They go through unthinkable obstacles, pushing against an ancient civilization that has emerged from its sleep, imposing itself as an enemy that is at best one step behind, and at worst one step ahead.

Rumors from across the land are always changing the course of action, but conflicts are abound pretty much everywhere. Some cities have become strongholds denying the entry to trespassers, while kings and masters hide inside their lustrous halls, trading the needs and worries of their people for their own safety. But hopelessness often leads to retaliation. Not only is there danger in the sky, or looming in the ethereal distance as a colossal observer. The people living through it are tired, scared, desperate. The situation has made them willing to give or lose it all, and that’s something we constantly witness in our travels.

When you’re not engaging in dialogue or fighting enemies, you and your caravan travel. Lush, vast landscapes are left with the marks of footsteps and cart wheels, all the while an indicator on the top of the screen illustrates the situation. It signals how many days have passed, how many people are still in your caravan and how long will your food supplies last. All of these factors affect the group’s morale, so managing and thinking ahead is key for survival. But both external and internal conflicts often take place to interrupt your plans. You might find a lost caravan in the road asking for help, who then turn out to be a band of thieves that strike as soon as you low your guard. A village set on fire may have left a handful of families without home and you can let them tag along or let destiny decide what the fate might be.

Stories emerge and come to an end during the long walks in The Banner Saga. I found these moments to be the most memorable not only for the often heart wrenching decisions that linger in your mind, but also because of how they shaped you as a player. I always tried to give troublesome people in the caravan a second chance, but this often backfired. I tried to grant everyone in need shelter and food, but as the needs increased due to a bigger population, this also meant that they were bound to starve in the coming days. I often asked if I was truly being helpful or not by lending a hand, exposing them to new worries that they might not have experienced before.

It’s hard to put the blame on anything, or anyone. The situation is outside everyone’s control, and no one can predict the outcomes of their actions. The people in the caravan are bound together, for better or worse, such as I’ve been with my family since quarantine started. But I think the scale is even wider. To wake up is also to login on Twitter and Discord and check how my friends and peers are doing, what they decide to spend time on during the day, and what sort of goals or objectives they have set themselves as motivators. And yet social media continues to be toxic and harmful. So what is there left for the people who need the interaction, or escapism, from the stillness of their routines?

2020 has brought the worst out of people, including myself, and still continues to do so. It’s hard to find healthy ways to channel frustration and discouragement. There aren’t tangible tools to oppose the impending doom, either. Sometimes my only wish is for people to just wear the goddamn mask and stay inside to make things easier for everyone, or in my line of work, to log off more often and stop quote retweeting fascists only to dunk on them.

These have been the least favorite of my constants, but there’s been a few other positive ones, such as this column. It’s been hard to summarize, even as I’m writing this, how to close a year like this. By far, I think that what has pushed me to continue is the fact that everyone is enduring in their own ways. It’s a global, collective struggle that has been with us for months now, and yet we are still out there. Albeit small, it’s a reassurance.

I wish I could travel back in time to March and tell myself to just be patient, that this, too, seems like it’s bound to pass sometime soon. I can’t wait to return to this piece and look back at this period of time, breathing with ease and enthusiasm. But until then, we can face the end of the world together. All we have to do is keep marching on.