I’ve never really cared about Superman. I don’t know why, exactly. Maybe it’s because he is too powerful, although I don’t have a problem with similarly all-powerful characters like Dr. Manhattan and Phoenix. Maybe the characters in the series, folks like Lois Lane, Jimmy Olsen, General Zod, Martha and Jonathan Kent, never really grabbed me. Clark Kent most certainly never did. As such, I’ve not read many Superman comics. All that to say: Superman Smashes the Klan is damn good.

Superman Smashes the Klan feels at once original and sensible. The premise, 1940s Superman fighting the KKK, is bold and exciting, but also perfectly fitting for Superman the character. To my surprise, Superman Smashes the Klan is loosely based on an older Superman story titled “The Clan of the Fiery Cross.” That 16 part radio program aired in 1946 on the wildly popular The Adventures of Superman radio show. In “The Clan of the Fiery Cross”, Superman defended a Chinese American family from a clear KKK stand-in. The Adventures of Superman was very successful, especially throughout World World II, where Superman often fought Nazis, but “The Clan of the Fiery Cross” was particularly successful, winning awards from various magazines and parent association groups.

2020’s Superman Smashes the Klan, written by Gene Luen Yang (Avatar, American Born Chinese) and drawn by artist duo Gurihiru (Avatar, The Unbelievable Gwenpool), takes the groundwork from “The Clan of the Fiery Cross” and reinforces it greatly. Set in 1946 Metropolis, Superman Smashes the Klan stars the Lee family, a Chinese American family who move from Chinatown to the suburbs after their father lands a new job. One night shortly after their move, they find a burning cross on their lawn, with a group of Klan members threatening, then inciting, violence against them. What follows is a story about fighting racism and claiming your unique, powerful identity. 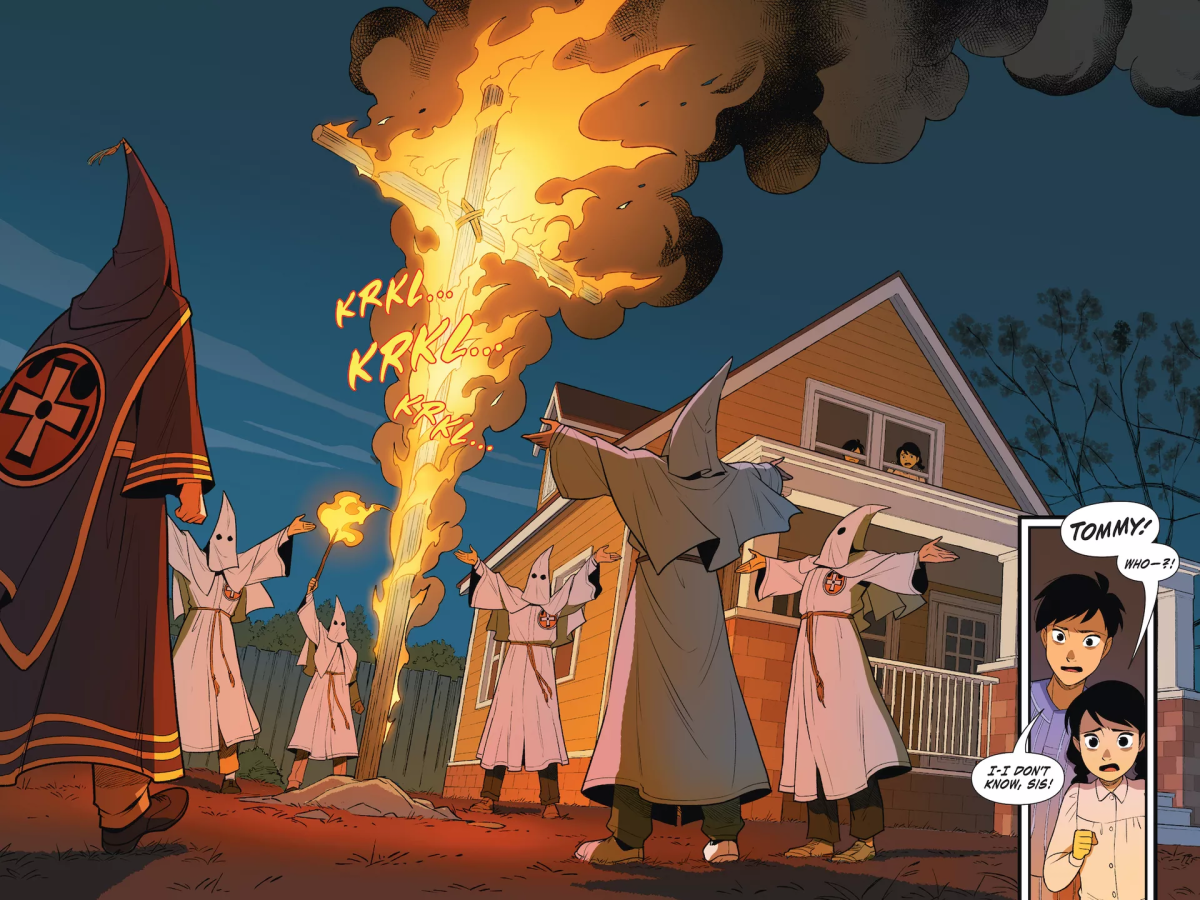 Despite the book’s title, this is just as much the story of the Lee family as it is Superman’s. Our co-protagonist, Lan-Shin “Roberta” Lee, misses Chinatown, and is unsure how to behave in her new, largely white, neighborhood. She struggles with feelings of belonging, a struggle that escalates as her family (and Metropolis) is confronted with an increasingly violent Klan. Inspired by her brother and Superman regulars Lois Lane and Jimmy Olsen, Roberta stands against the Klan, working with her friends, and later Superman, to foil their violent machinations. Yang is particularly talented at writing conflicts around race, identity, and belonging, and his penmanship is here in full force, managing to tackle deep issues with weight, brevity, and clarity.

We also follow Superman as he confronts his own identity. While Superman still does Superman things, swooping in, saving the day, inspiring us to be our best selves, he struggles not only to balance Klark Kent and Superman, but Superman and his alien origins. Much of the book is dedicated to Clark’s past, and his struggle growing up not knowing who he is or where he comes from. As a child, he starts to believe that he is better off blending in, keeping his alien-ness under wraps, appearing as normal as possible. He keeps that belief all the way through adulthood. Even when he is Superman, leaping stories high, speed-running on phone wires, beating up bad guys, he is holding himself back, making sure people see him as just a super-man, not someone different, someone alien. This comes back to bite him when he is unable to stop certain disasters, but more importantly, when he is confronted with Klan members, who see him as proof of white supremacy, a literal Übermensch, a living embodiment of the white master-race. 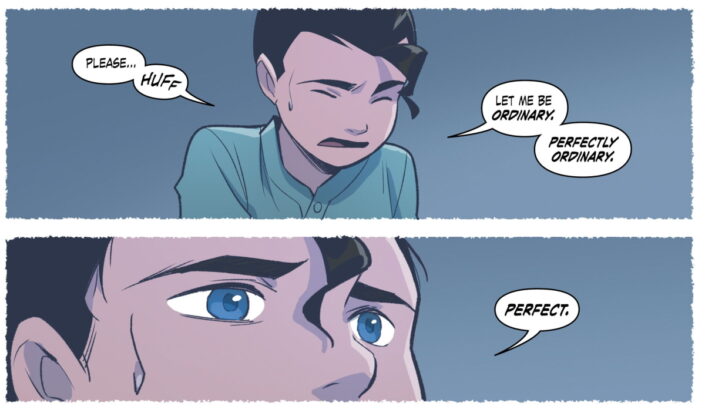 Lastly, there is the Klan themselves. Thankfully, Yang does not shy away from accurately depicting their slurs, violence, rhetoric, tactics, or philosophy, despite the book being published through DC’s Young Adult imprint. By making two central characters Klan associated (one a literal grand wizard, the other the grand wizard’s nephew, uncertain of the morality of their actions), Yang can investigate the Klan’s philosophy of one race, one color, one religion, and then destroy it, not only through Superman punching the bad guys, but through Roberta and the other kids’ more everyday heroism.

Again, all of this goes back to Yang’s expertise writing on issues of identity, racism, classism, bigotry, and the like. Superman Smashes the Klan could have been preachy, dull, and blunt, essentially repetitions of phrases like “racism is bad” or “the Klan is wrong” for every scene. But Yang adds nuance and depth to each and every encounter, creating a more detailed story of good triumphing over evil.

As for the art, Gurihiru lean into the 1940s style, with bright colors, neat lines, and clear stylistic inspiration from the 1940s animated Superman shorts by Fleischer Studios, minus the offensive racial stereotypes. As is their style, Gurihiru nail key poses, big facial expressions, and bright colorwork. Tense action and arguments play out in dynamic back-and-forths, with narrow stacked parallel panels. Overall, they make the whole story pop in fun, animated ways. 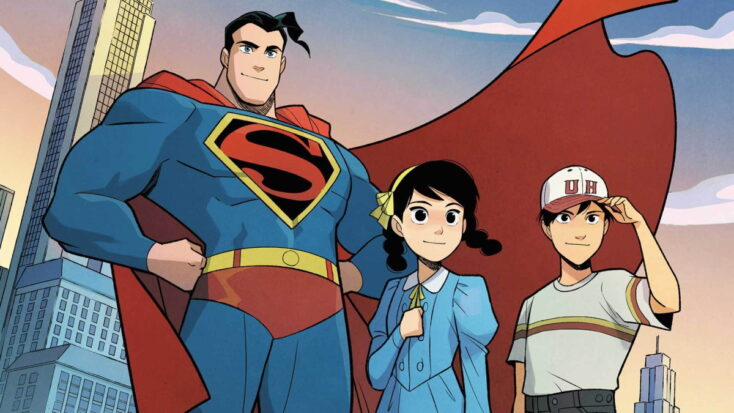 An unexpected, but wonderful addition is Yang’s 12 page essay at the end of the book, “Superman and Me.” It is poignant and impactful, discussing the history of the Klan in America, racism and the American government, especially during WWII, the origins of Superman and The Adventures of Superman radio broadcast, and Yang’s own experiences with racism growing up as a Chinese American. It’s clear that Superman means a lot to Yang, and Superman Smashes the Clan certainly does him justice.