Avatar: The Last Airbender, a Nickelodeon cartoon from the mid 2000s, is among Netflix’s top 10 most-watched shows. It has been for months now.

I’m sure the fact that there is a global pandemic and folks are trapped inside is helping The Last Airbender out. But if you think it’s popularity is solely due to its fantastical, escapist elements, you’re dead wrong.

The Last Airbender is an excellent show. It is easily one of the best animated series ever. It’s themes of war, genocide, imperialism, totalitarianism, social justice, redemption, and growth are all extremely well done. It’s incredibly well written, and one of it’s characters (Zuko) has perhaps my favorite TV character arc ever.

So, when I picked up Avatar: The Last Airbender – The Promise, the graphic novel continuation of the series, the bar was set astronomically high.

Luckily, Team Avatar is in good hands with writer Gene Luen Yang (All American Chinese, Superman Smashes the Klan, Dragon Hoops), artist duo Gurihiru (Unbelievable Gwenpool, Superman Smashes the Klan), and guidance from Avatar creators Bryan Konietzko and Michael Dante DiMartino. The Promise delivers on the series’ characters, writing, themes, and tone, while exploring a familiar but fresh story that’s sure to please any fan of the show.

The Promise takes place one year after the events of The Last Airbender. Avatar Aang and newly minted Fire Lord Zuko are working together to usher in a new era of peace, and rectify the damage done by the 100 year war. The duo face a complex problem by the name of Yu Dao, the first, and oldest, fire nation colony located within the earth kingdom. Aang believes the colonists should be reallocated back to their “home” in the fire nation. Zuko agrees, at first. But after his own citizens label him a coward and a traitor, Zuko starts having second thoughts. Filled with pressure, doubt, and many sleepless nights, Zuko goes to his imprisoned father for advice on ruling his people. As Aang and Zuko grow further apart, the world seems set on another collision course: this time between Fire Lord Zuko, Earth King Kuei, Avatar Aang, and the people of Yu Dao. 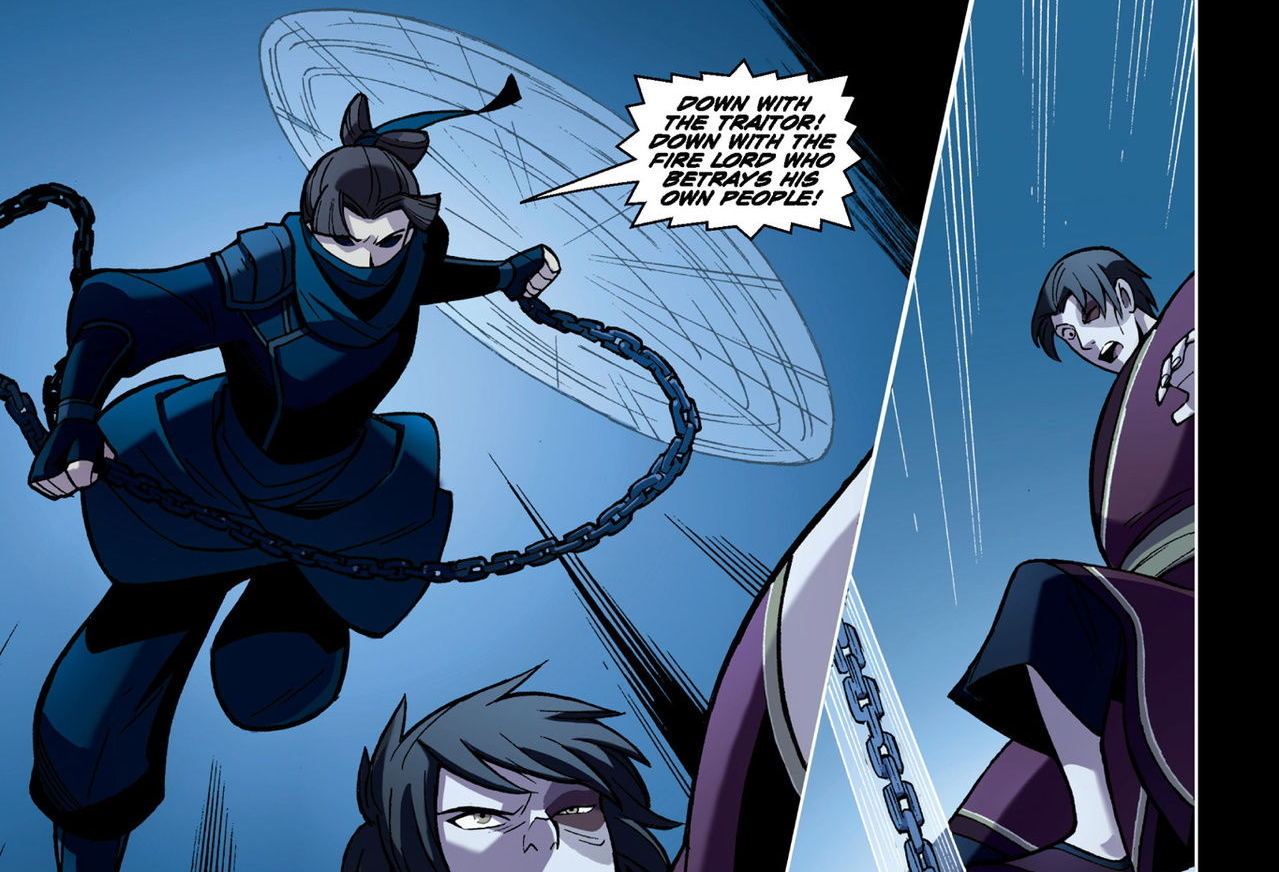 The Promise draws much of its strength from this setup. In The Last Airbender, the gang was faced with complex issues around justice, peace, government, and power. But in most cases, there was one right answer: two sides should share resources, violence is wrong, brainwashing your citizens, regardless of the reasons, is bad. In The Promise, the answer to the central conflict is not so simple. Yang, having written many all-ages comics with themes around racism, war, governance, and the like, is particularly adept at writing these types of conflicts.

Aang, influenced by his past lives, carries with him a very traditional world view. In Aang’s mind, the world is four harmonious, separate nations, where fire benders live in the fire nation, earth kingdom citizens in the earth kingdom, etc.. And while that has been the way of the world in the past, forcing the colonists of Yu Dao, many of which were born and raised there, to move to a “home” they have never been to seems wrong. This problem is exemplified in some of the new characters, particularly Kori, an earthbender, Yu Dao native, and child of mixed-nation parents. With Aang’s own feelings about the fire nation and occupying territory tied up in the genocide of his people (yeah, remember that?), he struggles to find the right path forward in a way that is gripping, heartfelt, and touching.

Meanwhile, Zuko’s struggle to rule his people is just as complex and engaging. Something I didn’t expect from The Promise was a greater understanding of Zuko’s father Ozai. But the scenes between Zuko and his father provide some of the most tense and dramatic moments of the entire book. I expected Ozai’s philosophy of totalitarianism to be horrible (which it very much is), but I didn’t expect it to resonate with real world events so obviously, and so painfully.

The rest of the gang, while not as prominent as Aang and Zuko, feel exactly like their show counterparts, with solid writing by Yang that showcases an in-depth understanding of Avatar’s main crew. Katara is still the thoughtful, protective, fierce water bending master we know and love. Sokka is still a hilarious mastermind. Toph is still brash and independent. While some of their scenes, particularly Toph running a metalbending academy, can seem disconnected from the main conflict, they were always a joy to read. 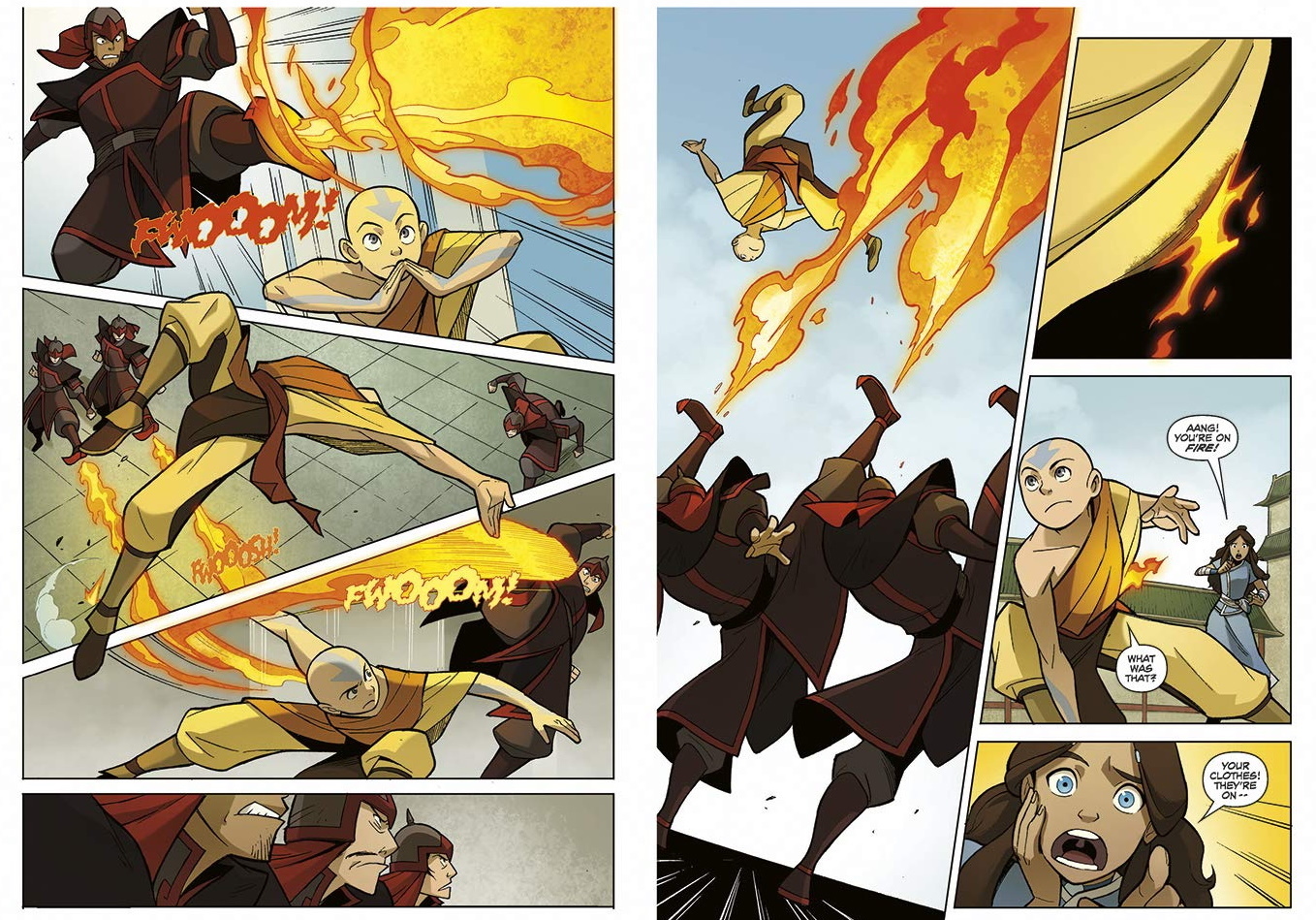 The artwork, drawn, illustrated, and inked by Gurihiru (the publishing name for the team/duo Chifuyu Sasaki and Naoko Kawano), manages to evoke the style of the show with quality character expressions, posing, and fidelity. I was sceptical of how bending would be translated to the page, as it, along with much of the martial arts in the series, is based in fluid motion. While the artwork does not focus on fluid, multi-panel movement, Gurihiru still nail the look, feel, and impact of bending. Their bold character outlines, eye-grabbing posing, and spot-on colorwork are entertaining and cartoon-y. And the artwork stays consistently excellent, maintaining outstanding quality all the way through to the last page.

Overall, The Promise is a stellar continuation of The Last Airbender, going far above what I expected. A back-cover quote from Comic Attack reads, “a read of it feel[s] like you’re still watching the show.” I couldn’t agree more.

A Visitor’s Guide to the Rainy City