Trapped at home during a global pandemic I have found myself drawn, weirdly, to the small, Russian apartment complex rendered digitally in the 2019 game It’s Winter. I should, by all accounts, be drawn to some massive open world game – with stunningly rendered vistas, mind bending puzzles and an endless array of collectible items, but instead I find myself wandering the empty Soviet-era apartment as though it might offer up answers about my own distance from the world.

After booting up the game, I start in a hallway looking into the kitchen of a tiny apartment on the fourth floor, snow flickers outside a small window and the dull hum of wind undergirds the whole scene. The lights are off and my first action of the game is always to reach out and click them on, to throw the kitchen table with its sardonically cheerful checkered  tablecloth into sudden relief. There are so many moments like this first one placed throughout the game, moments that beg the player to ask questions about what this place is and what it wants from them. Why, for instance, was I standing in the hallway with the lights off? If you walk into the bathroom you will find that the tub is full of water, which laps gently against its basin. A note on the sink begins with a command to submerge yourself in timelessness, but who left the note?

Later, I will walk down the long stairway littered with snow and the occasional trash bag to the courtyard out back, where a sparkler sputters out as though someone abandoned it only moments before. It’s Winter is positively overflowing with near encounters like this, as though someone might appear out of a corner or open their apartment door and welcome you in. Looking up from the courtyard, I can see the warm lights of a handful of apartments pushing against the snowy night sky. But, I will never enter them. 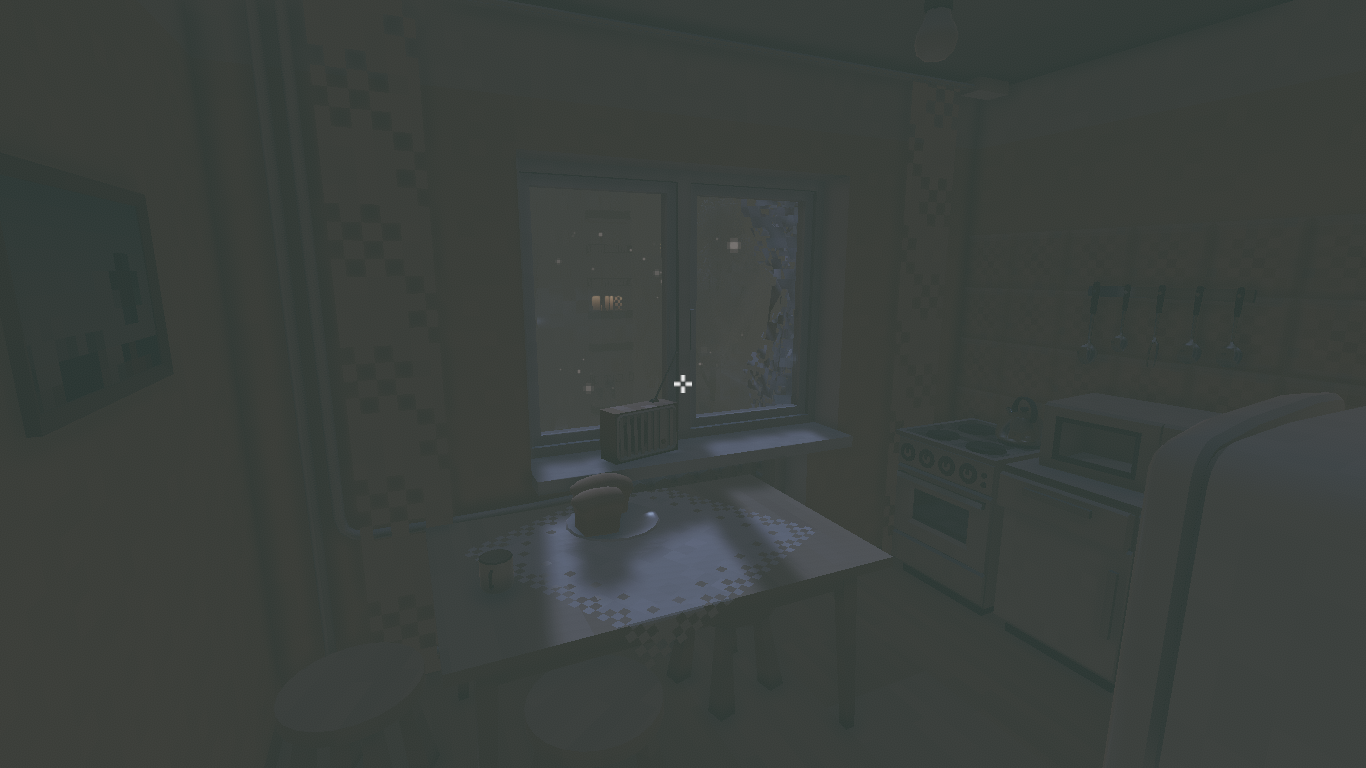 A lot has been made recently about the dangers of loneliness. The writings of German political theorist Hannah Arendt have been pulled up in a handful of essays, including in the New Yorker and Aeon, to remind readers of the link between loneliness and totalitarianism. “What prepares men for totalitarian domination,” Arendt writes in The Origins of Totalitarianism, “is the fact that loneliness… has become an everyday experience.” For Arendt, loneliness was more a social distance than a physical one – a slide into ideological thinking that divorces a person from both personal relationships and a shared reality. Most striking, for me, is Arendt’s idea that our ability to engage in thinking itself is bound up in our connection to other people. And through people, to reality. “The ideal subject of totalitarian rule is not the convinced Nazi or the convinced Communist,” she writes. “But people for whom the distinction between fact and fiction (i.e., the reality of experience) and the distinction between true and false (i.e., the standards of thought) no longer exist.” Basically, our distance from others makes it harder for us to know what’s real, and what isn’t. There’s no amount of thinking that can help you find your way back after you’ve lost your human connections, your human roots.

By contrast, the isolation of It’s Winter is deliberate in a way that invites thought, invites connection. It feels as though you are called to scour the game for someone, anyone, to speak with. Failing that, you are left to ask questions about who drew the bath in your apartment, invent stories about who left their sparkler to sputter out in the snow. It’s isolated, sure, but the isolation is so intentional that it’s never lonely. The game begs you to push back against it. 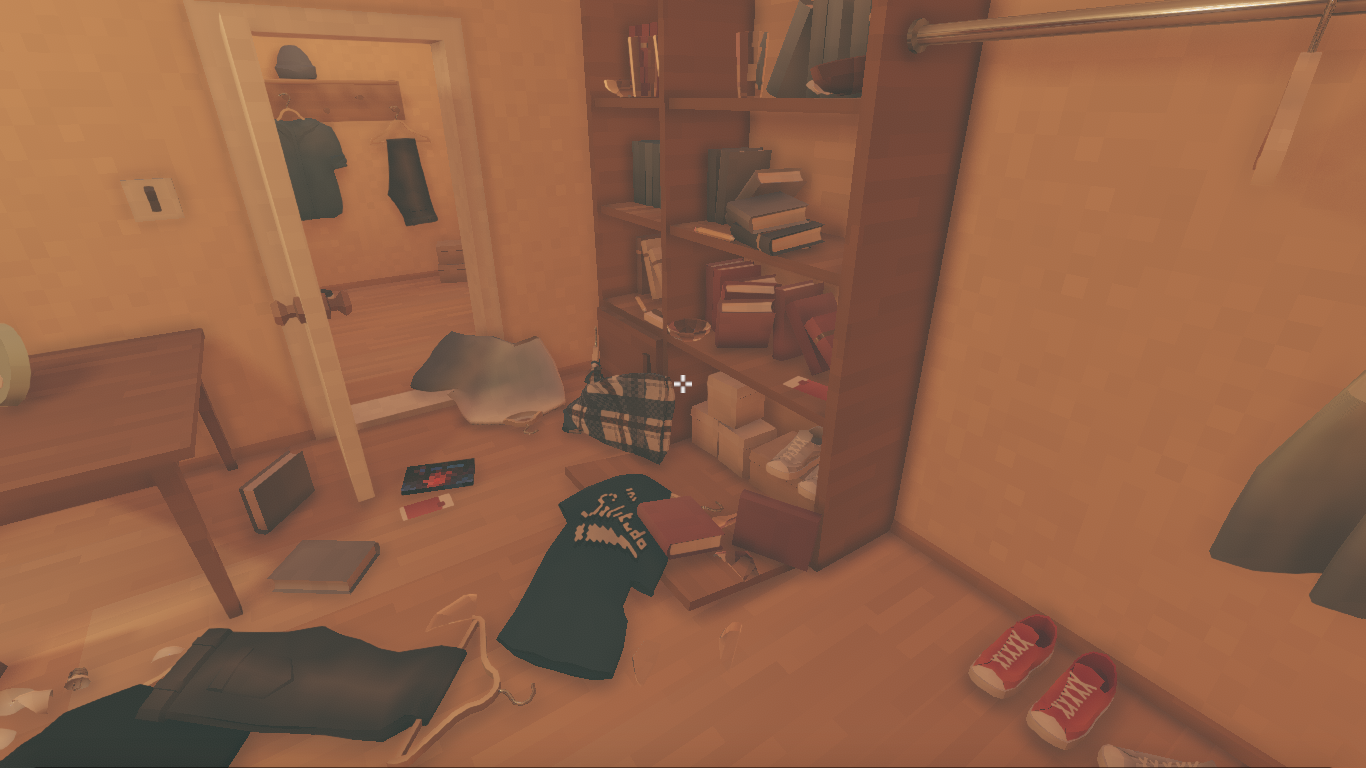 On one play through, I tore down the apartment. I ripped the shirts off their hangers and scattered books across the floor. I grabbed the TV and carried it around with me in the dark. There was something about having the TV that felt as though a companion was present, as  though there was someone to witness my time in the world. I carried the TV down to the courtyard and set it on the swing and let the snow fall for awhile. Later, I left it atop one of the snow trucks that weave their way endlessly up and down the street and marched towards the edge of the map. There is no ending to the game but there is finality to me in the moment of trying to walk out of the boundaries set by the game. The apartment complex is surrounded by a snowstorm, a thick cloud of gray that obscures your vision. If you walk into that cloud long enough and defiantly enough a woman’s voice will say, suddenly: “Snow is crisping under feet, it seems, there is nothing around here except this street.”

You can feel the creator’s presence bound up in the fabric of these moments. In an interview about It’s Winter for Russia Z, Ilia Mazo, one of the two creators of the game, said he thinks the game garnered interest because it made the black hole in his chest visible. “We made our black holes visible and invited people in,” he said. “They joined us, and realized that our sadness was just like theirs – and so felt a little less lonely.” It’s hard not to feel Mako’s fingerprints all over the note left in bathroom beside the tub full of water, in the narrator who coaxes you back to the world by reminding you there’s nothing but this street. “Don’t prepare for anything,” the note by the sink reads. “So when all the troubles of this world will be knocking at your door just lie to them: ‘I’ve been waiting for you.’” This is what It’s Winter offers – a path out of loneliness and back into the world through a shared space. A shared isolation. 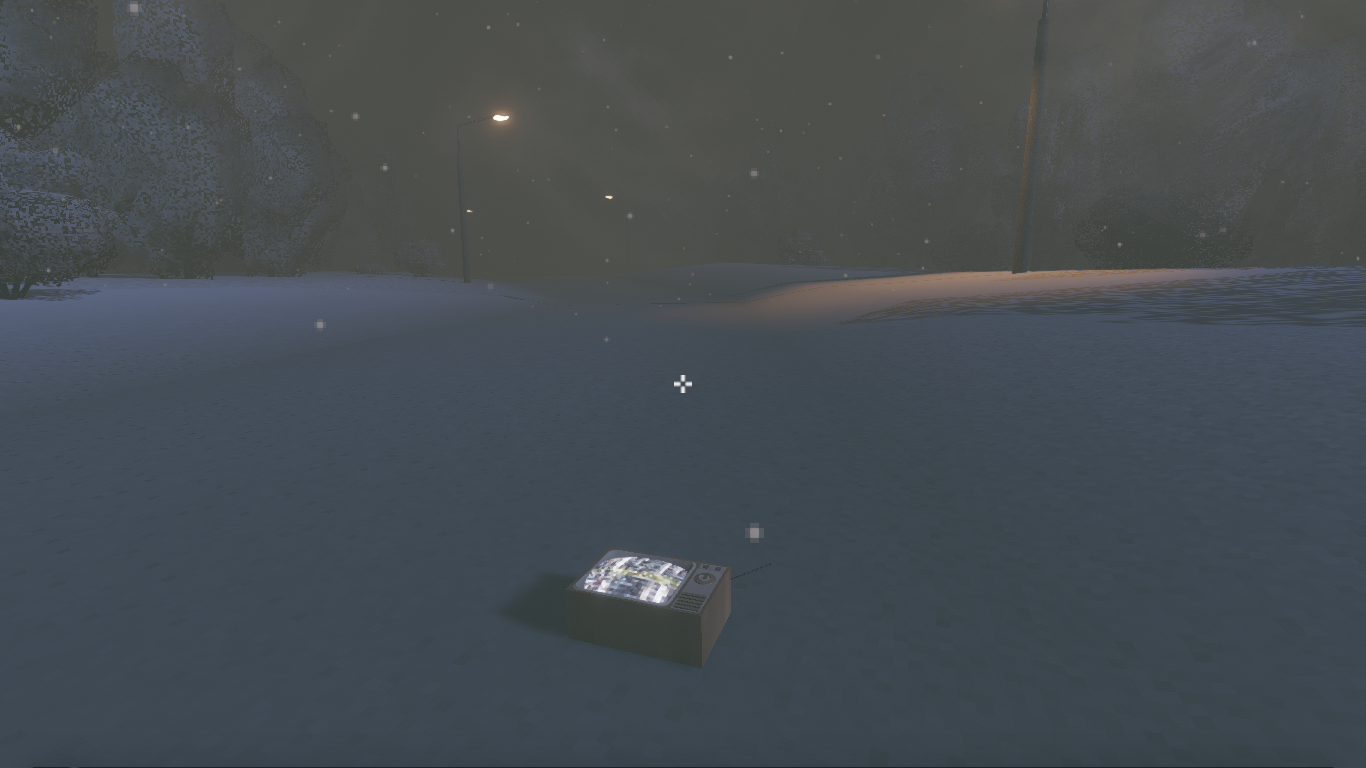 In Videogames, Everybody’s Working for the Weekend