It’s impossible to talk about Nioh and not mention the success of the Souls-like style it incorporates that leaves players crawling back for more. Nioh takes that familiar style and forms it into a fantastic (albeit difficult) samurai style RPG reminiscent of Way of the Samurai or Onimusha. Not to mention a dungeon crawler style loot system. Nioh’s nods to historical fiction are a pleasant surprise for anyone interested in Japanese history; a common trait for those of us in the market for Samurai RPG titles.

And, who else to create an Eastern historical fiction/action title but the crazies that made Ninja Gaiden and Dynasty Warriors, Team Ninja and Tecmo: Tecmo Koei. The team has their work cut out for them if they are going to polish and balance this beast. With an unannounced release date, there will be plenty of time for them to configure AIs, shuffle stats, generate new content and focus on the player’s experience with the help of demo testing.

Continuing with the tradition of Ninja Gaiden and Dark Souls, the demo is not just challenging but incredibly frustrating as well. Most enemies blended into the environment and easily surround the player. Unlike other AI’s, enemies will not stop their katana swinging pursuit just because you stepped out of their patrol pattern either. Missteps, overuse of the stamina and ki, missed swings, or confusion with the various stances and combos will leave the player open to an unforgiving blow – ultimately slaying the player and leaving you confused and thwarted against unreasonable odds.

Nioh is going to be punishing. Fans of Dark Souls are known for their admiration of difficultly levels verging on masochistic, but is Nioh pushing it too far? As far as the demo shows, yes. The gameplay punishes poor spacial awareness, and each enemy seems to attack in different intervals, keeping pressure on the player’s evasion and defense. Spending your entire stamina/ki bar will have you collapse to the ground, wide open to foes’ to execute you with combo when you are most vulnerable. Countless times will you be fighting a samurai, have them on the brink, when you’ll suddenly fall to the ground, just waiting for a deadly combo, a flaming arrow and most certainly, death. 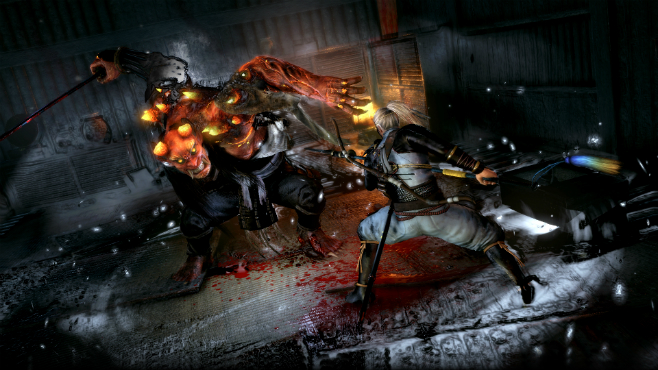 Although Nioh may be difficult to master for the new and inexperienced player, the feeling of accomplishment after completing a level outweighs the strife. On the up side, you’ll be dying in pretty environments. The atmosphere is phenomenal, if not dark and full of burning houses and corpses (including your own). Loot-able corpses give insight to lore and the last moments of a villager before they were cut down by demons or bandits.

The demons, too, scream with insane rage after your final blow on them, providing fuel to fire your urge to continue cutting them down. There will be a lot to explore in these environments and paths to progress through giving players less liner options. Combat is nonlinear also. Players can make use of swords, spears, axes, and hammers; or more subtle methods like bows, throwing shuriken, magic charms and ninjutsu.

Although this was only an Alpha demo, Nioh brings a lot to the table that not all titles in the genre can claim. The developers are using this well put together demo to give players a chance to help them identify the kinks for the final product. They’re also giving back by offering free DLC on release for those who have the endurance to finish the first stage of the demo. The demo ends tomorrow, so download it soon if you hope to grab the Nioh – Mark of the Conqueror DLC at no cost. Besides your struggles and tribulations at the hands of angry demon hordes, of course.

The World Next Door Is a Nice Enough Neighbor
Previous Post

How To Clean Up The Comments Section