The first great cockup that I can recall committing is at a holiday party my parents threw back in the nicotine-stained 80’s. While the adults were clinking crystal, we young’uns embarked on a round of classic hide-and-go-seek. Even as a mere kindergartener, hunting for 100% concealment was a singular pleasure, the chance to burrow deep in the mysterious nooks and crannies of our massive-by-scale house. The closet called out, old furs and worn leather and muddy shoes nuzzling me as wiggled in as far as I could, and that was when I saw the light, and couldn’t bear to keep this truth to myself.

I exploded from the closet shouting “WE GOT A NINTENDO!”, in response to which my mom swiftly descended down to chastise me for ruining Christmas. The memory is probably more harsh than the reality, given the nature of these things, but I was cleanly gutted. The joy of knowing I’d soon have access to this incredible machine was swiftly deflated, and for a few harrowing days I was led to believe that Santa was incredibly disappointed and unfortunately we had to return the NES. Thankfully my parents were not cruel enough to hold this line, and when the day came we celebrated with the brothers Mario, some Contra and maybe even Metroid.

This memory, along with others like flipping through the laminated game covers at the library, luxuriating over every maximalized page of Nintendo Power, playing Mickey Mousecapade cross-legged until my toes were just static and so many others all flood back as my partner and I unbox the recent LEGO Nintendo Entertainment System set. That she ordered it was as much a surprise for me as when I found the original system thirty years ago (though I wasn’t responsible for spoiling it this time) and, given that the box is wrapped in the same starry sky and singular yellow typeface, the tsunami of nostalgia I felt was likely the intended result. 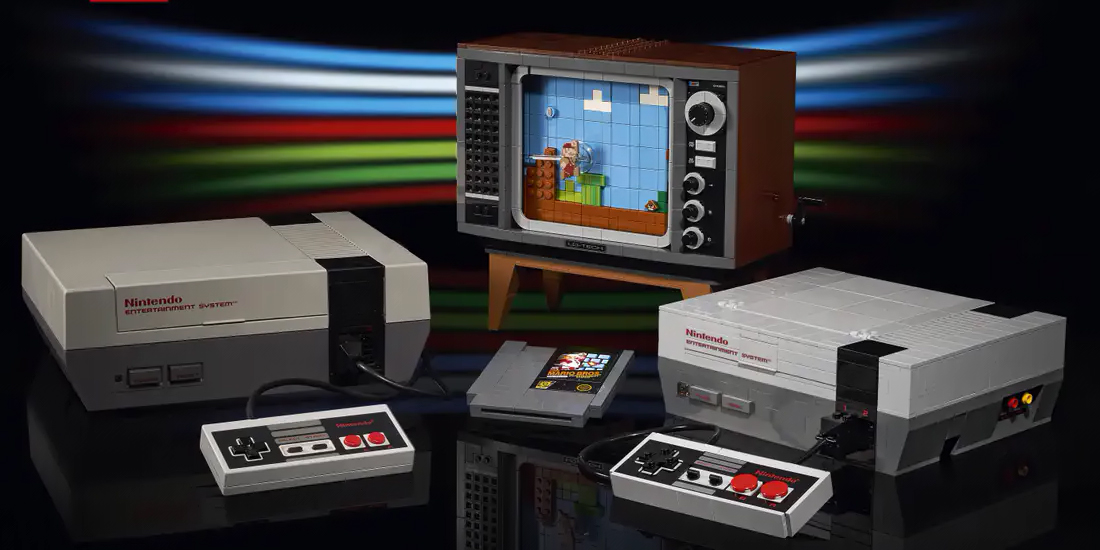 Nostalgia’s a helluva drug, one that I’m not regularly predisposed towards. This isn’t a boast, I honestly wish I had a better time remembering wider swaths of my own history, but sometimes all you need is the right kick in the pants. We pieced together all 20+ steps of this set, each in a few bags, to coax a simulacrum of cartridge loading and a Mario cursed to forever run to the right in an old TV set on four-legs. It’s a simple machine acting the part of an older, less simple one, not really playable but still a thing to be played with, larger than an NES mini but smaller than the real thing. There’s even a lovely easter egg to be built inside the system itself that nods to some of the original secrets of the first Super Mario Bros., all in monument to an era that will never be experienced the same way again (like most of those gone by).

Such is the twist of memory, often bent and hammered into familiar and recognizable shapes working to recreate the feel of the moment rather than the truth of it. There’s a tension in the dance of nostalgia then, a balance struck against a world before quicksaves and adjusting difficulty on the fly, the raw edges of pixels left exposed in the clarity of 4k, against the thrill of seeing these wild and kinetic worlds react to your touch. The LEGO NES set is LEGO in the end, thousands of pieces placed one at a time, a journey sold rather than a destination, but it served its purpose with aplomb – casting me back in time to reflect in fondness.

There are other avenues towards this goal and Tribute Games is well-versed in their execution. They’ve been building on the lessons of those 8- and 16-bit days for quite a while now, as I’ve written about many times. In between sessions of pressing plastic, I was lucky to get a copy of Panzer Paladin in full, a game that I got to spy at PAX East. And full it is, bulging with spirit weapons, platforms, fights with a Zelda II horse-head/Proto Man homage and sprites to smash and dash against. 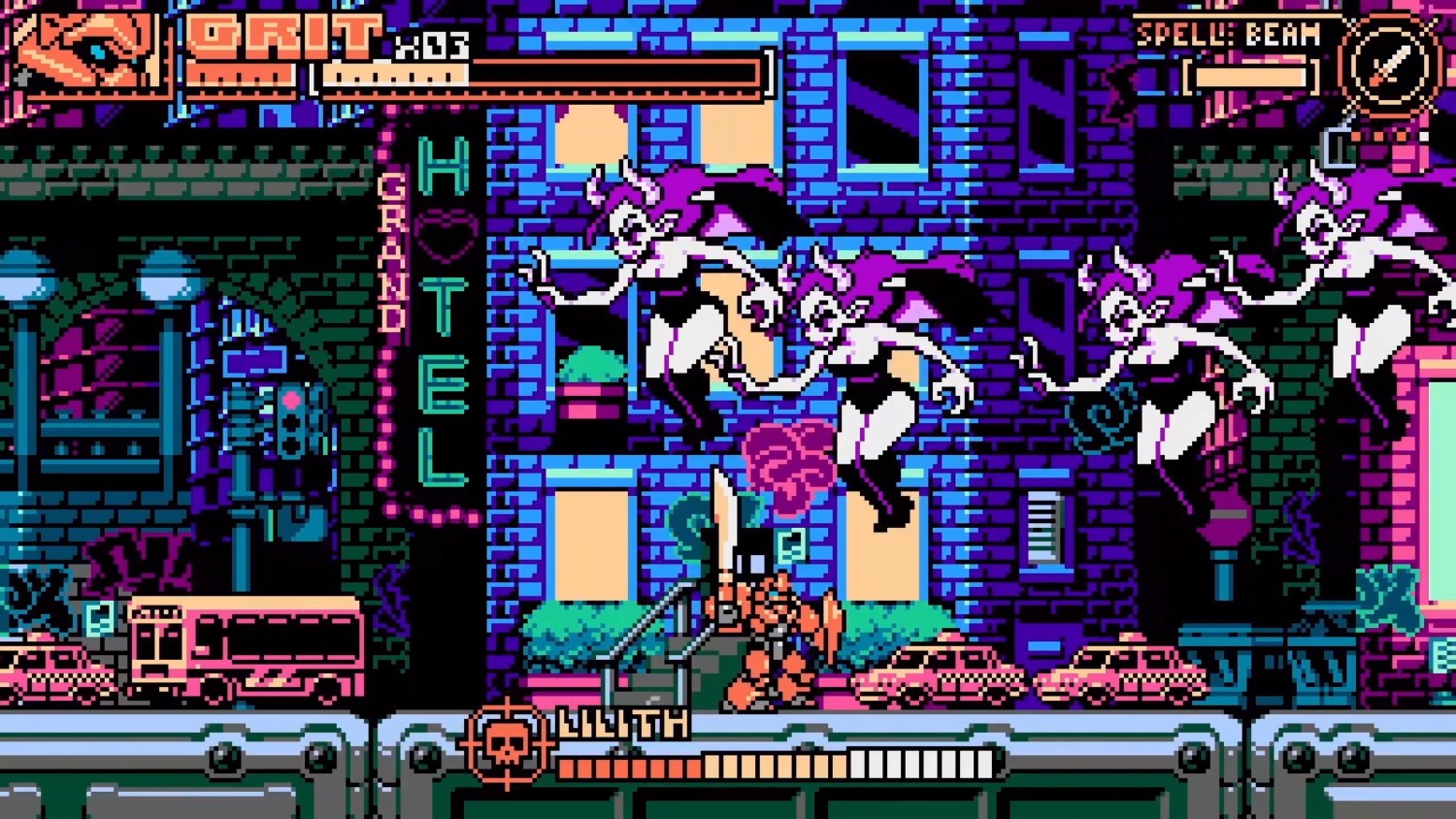 Panzer Paladin looks to thresh new hay out of the 8-bit days, with a simple story told with moody cutscenes that had me lovingly reminisce on those of Ninja Gaiden. You primarily jump and swing away in a giant robot, or sometimes the smaller robot pilot when there’s a tight spot to squeeze into. Players can choose which stage they’d like to blast through but you don’t earn boss weapons in the same way that Mega Man does, though it tips its cap in that direction, so one needn’t sweat the selection too much. There’s even a CRT filter to smear up the edges just like the old days, and I’m very much here for it.

Mostly the game is a big slice of comforting cake, to its credit and detriment. Panzer Paladin sinks the small details, and thankfully refuses to sweat the headaches of those days either. The stages run a smidge long and there are a bounty to choose from, but each boss is a dastardly enjoyable puzzle that thankfully stops short of maddening. I enjoyed my time with it, but unlike the limited selection of yore, I’m not really compelled to run through it again and again. This isn’t to fault Tribute, in fact, the only way they might have otherwise addressed this concern is to keep the game at half the length, which would be a sinister planned obsolescence. But as it is, I feel like I’ve played it several times over already, and my backlog runneth on.

Thus has nostalgia bitten me in the ass. I gorged on these games back in the day, when the NES was the height of gaming technology and design to me, then a mere babby. While I love to relive the taste every now and again, the truth is that with age and experience my palette has expanded, and a “new” NES game is inherently limited by design. Limitations can be a font of inspiration, and I’d be very interested in playing a new NES that is truly unlike any other. I treasure the memories of those titans that Panzer Paladin evokes, and had it been released in mostly the same capacity back then I’m sure it would stand among them. But as the LEGO NES set is an unplayable model, so too will I never play NES games as I once did, though I appreciate even a momentary dance with the warm spirits of those days.

Looking Ahead to Panzer Paladin as it Looks Back
Previous Post