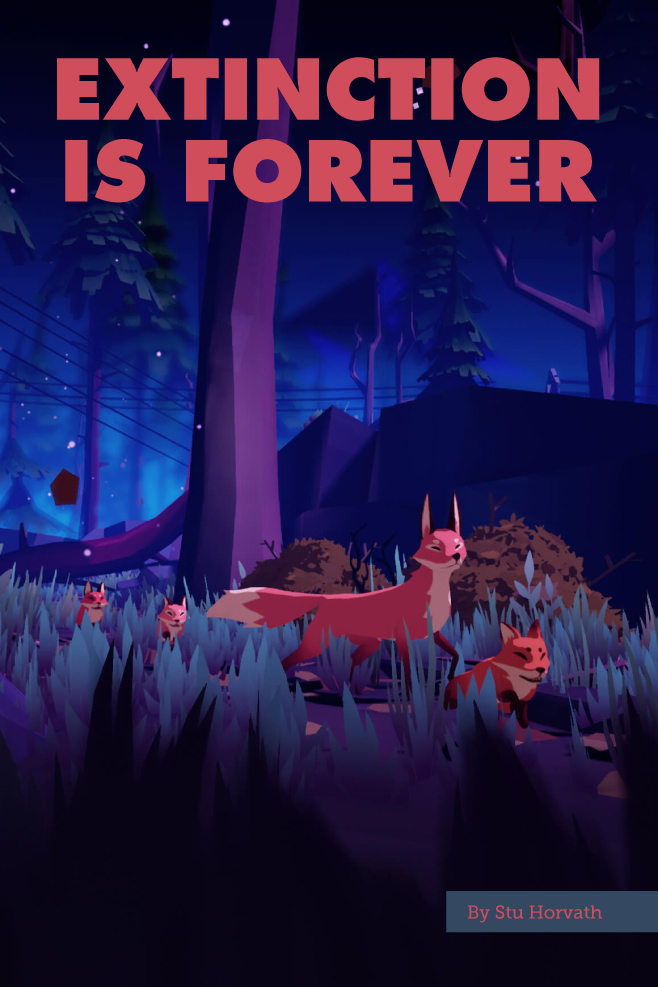 A crystal clear early memory: sitting on the floor of the TV room, watching a nature program about the rainforest, a go-to topic of ecological concerns in the mid-80s. Most of the show was about how rainforests work and the dizzying number of animal species that call it home. At the end, though, it took on a darker tone. I distinctly recall a tiny little gem-colored frog perched on a leaf, oblivious to the narrator’s grim intonation that countless species that would be driven to extinction thanks to encroaching human industry. The idea that such a cute little frog might be killed so some dumb jerks could get some lumber drove me to tears. I asked my mother why people would do that. She didn’t have a good answer. It was, to my recollection, my first brush with the petty unfairness of the world.

I still think about that frog a lot and how it represents a sort of universal precariousness of existence for the whole balance of the world, one which human beings seem inherently well-suited to upending. In my memory, the show crash cuts from it to bulldozers knocking down trees, a jarring and chaotic contrast to the frog’s quiet stillness.

Imagine my surprise when I was introduced, decades later, to the videogame Endling and felt that same queasy sense of soul-sickness in my gut.

Developed by Herobeat Studios, Endling is a survival game in which you take the role of a fox protecting her three pups. Here’s the rub though: human impact on the world has had a devastating effect and the vixen is the last adult fox on the planet.

Herobeat Studios came together in a Barcelona cafe in 2017, when programmer Javier Ramello and concept artist Pablo Hernandez met to discuss a design for the logo for a potential game development project. Hernandez liked the idea for the game so much that the pair ended up as partners in the venture. The game in question, of course, was Endling. 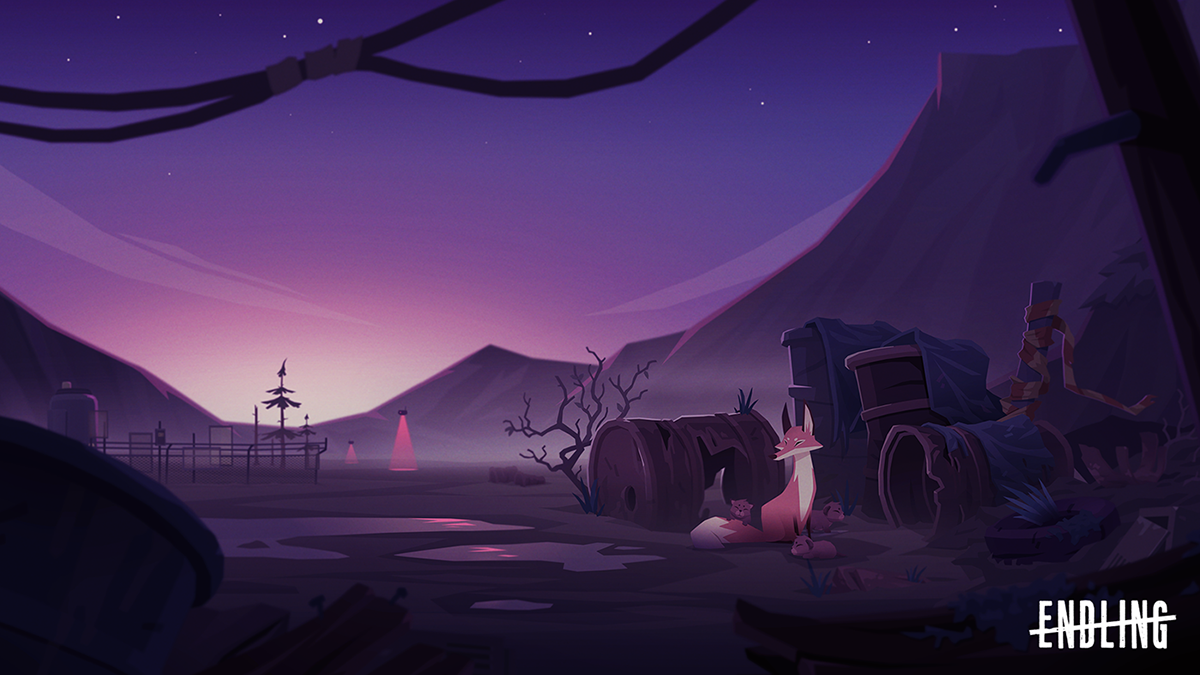 From its inception, Endling was conceived as a survival game that would examine how extinction is one of the most dramatic, and final, consequences of human activity. The vixen of Endling is the last of her kind. During the course of the game she must care for, protect, provide for and teach her pups so that they may survive in a harsh world. Failure in these tasks will almost certainly result in the death of her pups. The hope is that, thanks to the harsh reality they experience with the lives of this family of foxes, players take away an increased awareness that human society causes ripples that spread to the rest of the world, often to catastrophic effect.

“We believe that the topics covered by Endling are of global interest and we want . . . to explore deep themes, inviting reflection by players,” says Javier. “To develop Endling‘s narrative we have investigated what the world will be like in the next 50 or 100 years if we do not change our consumption habits. Unfortunately, the result of that investigation revealed to us a world in which even adaptable animals that today are far from danger, like foxes, will likely be on the verge of extinction.”

Endling may be a game about the dangers faced by foxes a century from now, but it represents other risks as well. To make the game, Javier and Pablo left their jobs and took a huge financial gamble.

“Being an entrepreneur is not easy in Spain, especially since the government here does not support videogame development and it is barely considered industry,” says Javier. “We had to get loans and invested all our life savings into this project. The most complicated part was quitting our jobs to embark on the development of a vertical slice [of the game] for a year while looking for investment without any guarantees. It was not an easy decision and is something that definitely affects your personal relationships. Lucky us we had full support from our families . . . and knew many talented former colleagues who were eager to help us. They knew this is what we always wanted to do and developing a project with this message worth the risk.” 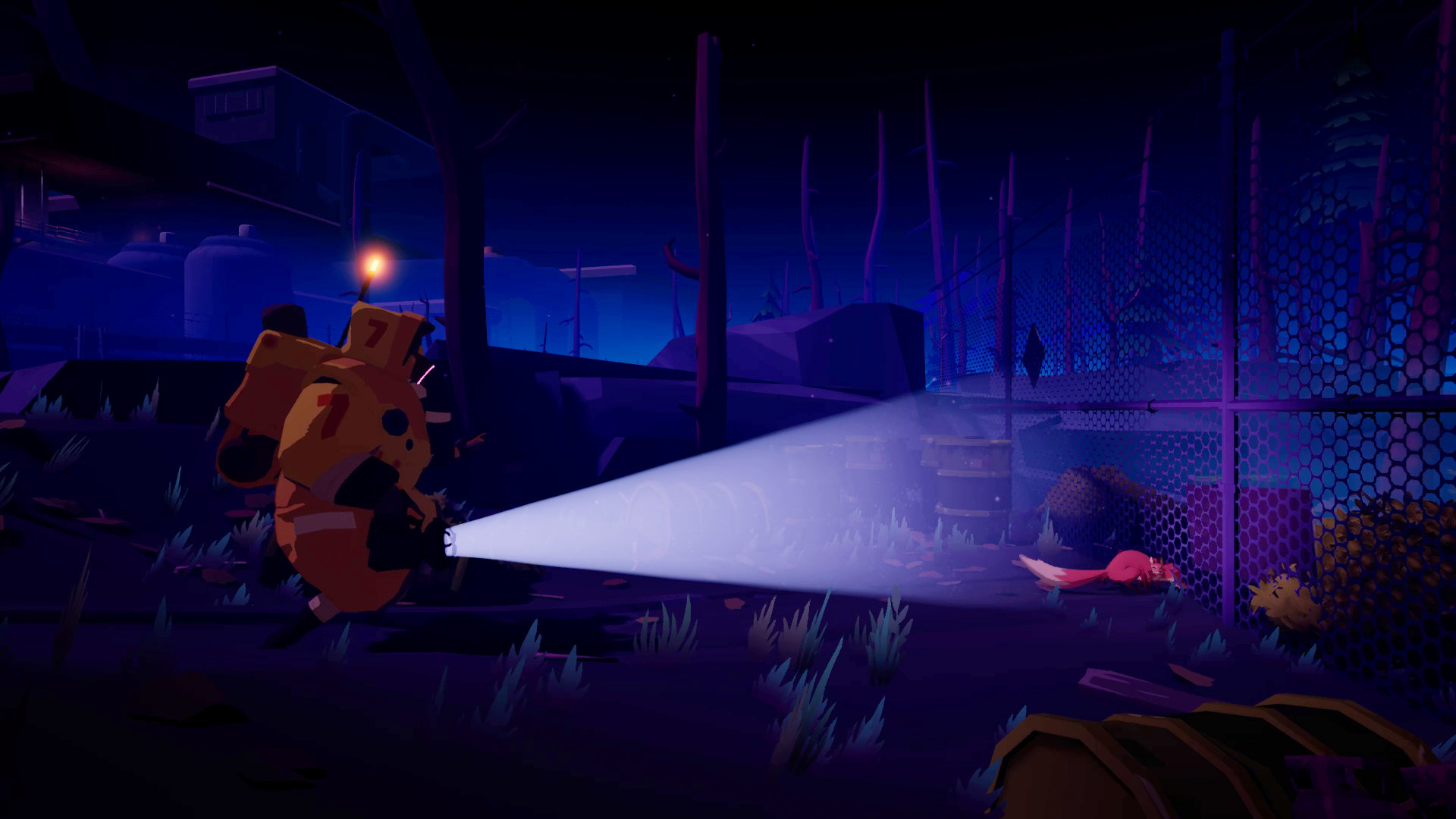 That first prototype got a good reception at GameBCN, a videogame incubator in Barcelona. That led to funding and HandyGames coming on as publisher. “Now we are working full throttle on making this dream come true.”

It wasn’t exactly like staring extinction in the face, but there are parallels. Hopefully the foxes are so fortunate.

The approach of Endling is informed by media that deals with topics and themes of social impact with nuanced narrative sensitivity, like the videogame This War of Mine, the film Okja and the documentary Cowspiracy. The idea is to create spaces of doubt in the player’s mind through the game’s narrative and mechanics, then encourage them to find their own answers.

The fox is an excellent vessel in this regard. “Outfox” is a verb for a reason, after all. They resonate with us as clever, resourceful creatures in both folklore and literature – Japanese fox spirits, Reynard the Fox and the fox in socks are just a few that come to mind. They’re also cute, fuzzy and their place near the middle of the food chain naturally makes them easy to empathize with (and offers a wide range of possible interactions with the world). Where any animal is involved – in games or real life – people will always project some human-like personality and intellect onto them.

This has become one of the biggest difficulties in the development of Endling. While the gorgeously illustrated foxes of the game can’t help but invite the player to anthropomorphize them, the game itself is committed to portraying the foxes as they are: animals. They can’t read, talk or reason. “They are animals,” says Javier, “and in Endling they act like animals, so you won’t see them pull levers or mechanisms [even though] that would make life easier for designers at Herobeat Studios.” 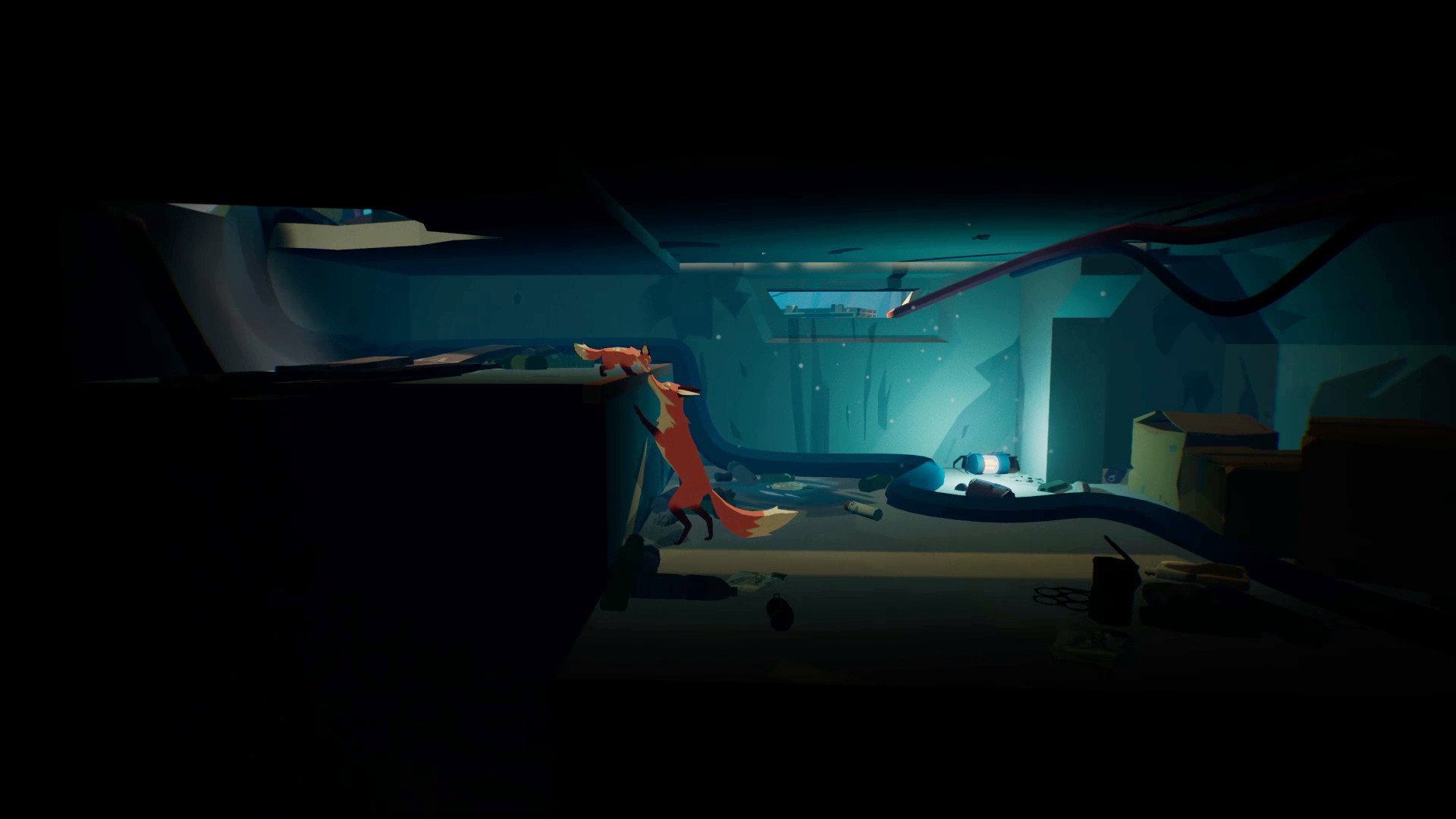 The three cubs, and being bound to them, is the core of Endling. At the start, they are just balls of fur, but they slowly grow over time. You range out of your lair, bringing back food, and they have vital experiences that in turn teach them new skills. Those skills aid in the whole group’s survival.

“Some of those life lessons are traumatic while other are just cute. Our goal is to let the player recognize the cubs not only through their visual appearance but also by how their personalities are built through player actions,” says Javier. “For example, one of the cubs may have developed to be more agile, allowing him to reach locations that the rest of the litter can’t. If this cub dies or none of your cubs got this perk, then those places are not accessible and you will have to find other ways to find your precious food.”

Eventually, the effects of human society encroach on your territory and your initial lair is rendered unsafe. This forces the fox family out into the wider, dangerous world, to fret over finding food, shelter and a way to survive.

The potential for something terrible happening is great. “Losing one of your cubs is a tragedy from both emotional and gameplay points of view,” says Javier.

Looking at Endling reminds me of that frog and all the callous cruelty it embodies in my mind. And the sadness. I can’t help but wonder if Endling will be too heart-wrenching. After all, even if the player is successful and shepherds the fox cubs to maturity and independence, what kind of world are they inheriting? Can the mother’s efforts amount to more than a nurturing delay of the inevitable? Perhaps that is the lesson.

Javier is ambiguous. “Well, it’s definitely not a Disney movie. Endling‘s world, our world, is harsh and players will have to work hard in order to reach the best ending. The truth is that a simple vixen can’t change what we are doing to the planet. She is just a spectator and we all are going to suffer the consequences. 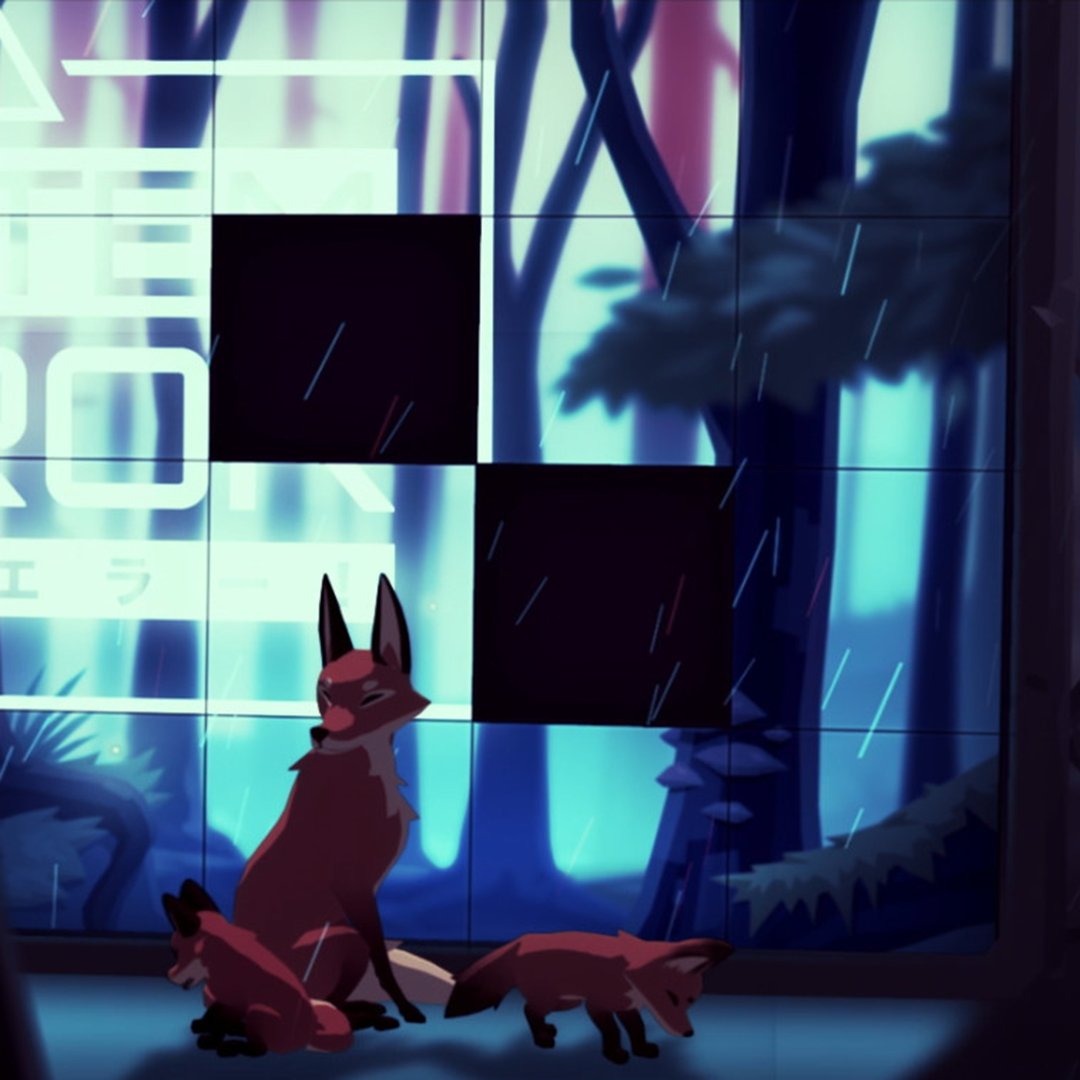 Beyond the Farthest Shores