The moment a little blue squirrel named Static showed up in Animal Crossing, the latest of a gaggle of diminutive animal villagers to decide to put down roots on my island, I knew that I hated him. I hated the strangled, baritone voice incongruously piping out of his tiny body, the Guitar Center-level interior decoration of his house, his faux-edgy Saturday morning cartoon purple and yellow coloration, and the nerf sport corniness of his overall vibe. I knew there were better villagers out there, and Static didn’t even measure up to the rest of the residents who’d already established themselves in my tropical paradise. I had a measure of quality to maintain, and with limited slots available, Static was keeping me from the island full of ideal animal companions that I knew I deserved.

So I did what I hadn’t the stomach to do before Static showed up, I went and complained to Isabelle about him. It’s a function in the game that allows you to register your displeasure with certain villagers, leading, eventually, to their summary expulsion from the island. I wouldn’t ordinarily consider myself a snitch, but I wanted better for myself and for my island; so Static had to go.

A few days later I was doing chores around the house and had Animal Crossing’s menu screen idling in the background. Normally, once you turn the game off, the world of Animal Crossing blinks out of existence. The game’s software still keeps track of time: weeds still grow and trees bear fruit; villagers will comment if days or weeks pass between your interactions. But they only experience time as we do when we are actively playing the game. The exception to this is the menu screen, which cycles through an attract mode focusing on random villagers as they act out the random beats of their daily routine. At this particular moment, the game was focused on Static. He was taking a stroll by his house, which led him to a nearby river, where he sat and sang a little song. He gazed up, as he sang, at the night sky, innocent in his unawareness of being observed. My heart melted at this sight. The idle actions sorted through by this bundle of routines and scripted animations were enough to completely change my mind about Static and, instead of kicking him out, convinced me I needed him around. 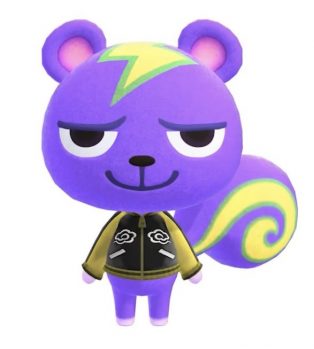 Animal Crossing’s villagers aren’t real, nor is their design particularly interested in nailing complexity or verisimilitude. There are exactly eight personality types, which, along with gender and species, precisely define the nature of each villager down to each rehearsed line. They are friendly mascots at a theme park, there to add character, rather than to drive the story themselves. Still, there is just enough emergent behavior on display, just enough variety in how they spend their time on the island, that they manage to feel substantial nonetheless. Substantial enough to be missed, substantial enough to bring a smile to your face when they saunter around the corner to greet you once more.

In his short story, “The Lifecycle of Software Objects,” Ted Chiang depicts a virtual online world full of cute, artificially intelligent animal mascots called digients. Through the perspective of their developers, who maintain close bonds with their creations even after the company responsible for making them goes under, Chiang explores what it means to form attachments to entities that are little more than elaborate clusters of code. What does it take for something to be considered “alive?” How far are we able to stretch our definitions, even as new software and new objects continue to push at those boundaries?

And what does it mean that we seek to build meaningful connections with forms of intelligence that we – at the same time – refuse to be inconvenienced by? The digients of Chiang’s story are designed to be “a combination of smart and obedient . . .” Because they are still products that need to be sold, “. . . everything about the digients has to be appealing: their personalities need to be charming . . .” Similarly, the villagers of Animal Crossing are carefully tailored so as to charm players with their silly and playful mannerisms. Which, of course, works flawlessly on us. Humans can’t help but anthropomorphize everything around us: we see faces in electrical sockets and dream up the inner monologues of our cats and dogs. It isn’t, therefore, a huge leap for us to care about the helpless and sweet denizens of our virtual island town, designed as they are to tap into that very urge.

As with our pets, however, we see these villagers as our property; property we care about, but property all the same. When they bore us or annoy us, we can send them away and wait for new ones. We treat them like gashapon capsules from vending machines, turn the crank and see what new combination of personality traits and visual aesthetics will drop this time. We can even trade our villagers with those of other players, like cards, like symbols, but not as living beings. In our villagers, we want beings that can approximate the nuances of real living companions, as long as they march in lockstep with our own terms. Like the clients of Chiang’s digients we “. . . want something that responds like a person, but isn’t owed the same obligations as a person.”

In our villagers, we want beings that can approximate the nuances of real living companions, as long as they march in lockstep with our own terms.

I dream that somewhere buried deep in a landfill, there are thousands of the once super-popular Tamagotchi digital pets, now discarded; with just enough power in their tiny watch batteries to ping helplessly for food before flashing a pixelated, floating ghost and fading to the near-black of LED death. And maybe there’s also a place like that, somewhere in the universe of Animal Crossing, for those villagers, whether too brash, too ugly, too annoying, too weird, that no one wanted.

We can be cruel to these digital creations, because we are spoiled for choice. Their old words may find their way into the mouths of a brightly colored sheep or a leather decked lizard. Their old voices may come from a brand new villager’s lips, deeply uncanny as that may sound. As evidently artificial as these characters are, it only takes noticing a particular combination of traits, and assigning them value. They have meaning because we assign it meaning, they can be free if we decide they should be free.

I stopped complaining about Static and he still resides on my island. Yesterday I brought him a guitar as a gift for his corny home. I hope he’ll decide to stay, and remain a garish dayglo fixture of my otherwise idyllic island paradise. But if he does ultimately decide to move, it’ll be on his own terms, his own internally coded compass, not mine.

We’re Not Alone in the Shadows