Anyone who follows RFTW knows that I saw Radiohead last Friday night.

What most people don’t know is that it was the first time I’ve listened to Radiohead song in over a month. Maybe more. In fact, whenever I know that I’m going to a concert I put myself on a ban from any and all music by that artist.

This isn’t something that I just do for concerts either. I won’t watch any movie trailers or TV spots for movies in the two weeks before it releases.

As such, I’ve been on hiatus for all things Suicide Squad. In fact, the only major time I’ve violated this rule was watching the original Star Wars trilogy the day before seeing The Force Awakens.

In the same vein, I’ve embargoed myself from No Man’s Sky since June. So when footage of No Man’s Sky leaked last week it barely registered for me. I saw it happened, but knowing I’d soon have the game in front of me, I didn’t feel any impulse to break my fast.

When Sean Murray, Managing Director at Hello Games, asked fans via Twitter to “Take a break from reading about [No Man’s Sky], and picking vids apart” I understood him and we should all take his request seriously. 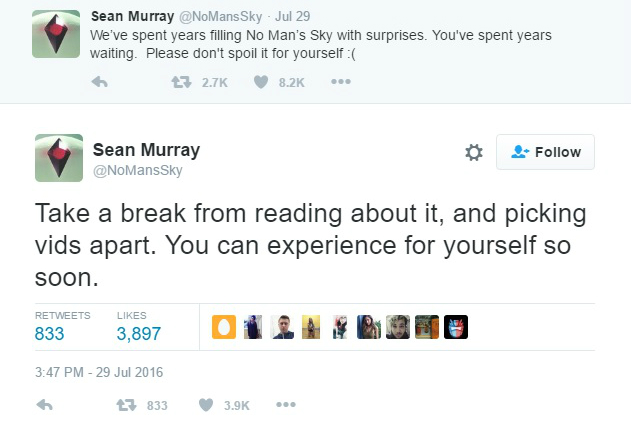 Looking around the internet it’s not hard to see normal marketing materials being picked to shreds for any tidbit of information. Game of Thrones’ season seven trailer is an amazing example. Apart from normal speculation, fans were able to deduce that Davos and Sansa would visit Bear Island because of a blurry sigil and that Pod would be grabbed by Bronn because of a blurry shot of his gloves and ear. Vanity Fair’s article dissecting the trailer even joyfully announces “let the obsessive speculation begin!”

There’s something powerful in the feeling of breaking a self-imposed media fast with a mouthful of what you’ve been craving. The first time I heard “Let Down” and “Karma Police” in over a month was when Radiohead was actually performing it live right in front of me. Now I’m insatiable for Radiohead again. It’s new to me all over again.

Sean Murray’s request isn’t only to protect the integrity of a project that he’s spent years working on. It’s also to fans in the best position possible to enjoy the game they so desperately want to play.

We should all go on a small cleanse once in a while to build our hunger for long anticipated projects. All those articles, videos and hot takes will wait for you. They aren’t going anywhere. In fact, if you read them after you have the game you might even have a greater appreciation for them. Maybe it’s time we all learned that sometimes the appetizer for the main course is no appetizer at all.