Uncharted 4 has accomplished something that no Uncharted game before it ever has or ever could. It demonstrates that over the last 20 years Naughty Dog has learned next to nothing about game design.

The game has some serious flaws in it’s presentation and structure. In place of a smoothly told story punctuated by puzzles and action/stealth, Uncharted 4 is an overly directed game that relishes in cutting to cinematics when the player should be taking the reins. It depends on old lessons learned, and doesn’t waste a moment to consider if those lessons are worth revisiting.

It’s 2016 and there’s virtually no place in games for button mashing to hold/pry open doors. Doing so doesn’t engender the player to the character, yet the devs have held on as if it creates a psychic link. Try as much as you want, but mashing a button isn’t analogous to strenuous activity.

In 2016 it’s tired and useless. In Uncharted 4 it’s involved in so many scenes that I found myself mashing triangle every time I approached a door in order to shave off a few seconds. The best parts of Uncharted aren’t the button mashing and it gates experiencing those great parts.

On a narrative level, the addition of Nathan’s rope undermines the previous three games. The throwable rope changes the landscape of Uncharted 4, especially in combat. For the first time combat incorporates verticality. Except, why was it impossible before? Uncharted 4 clearly establishes that Nate has known how to use a grappling hook since he was a child. Was he so scarred over the loss of his brother that he couldn’t throw another rope?

We know that Nate ditches his rope-phobia when they’re already in place. He uses them constantly in 1-3. The rope is a great addition to the game, but it’s one that should get laughed away by Sully or Elena with a “Why did you never bring one of these before?” Instead, I’m asking it, but I’m not laughing. 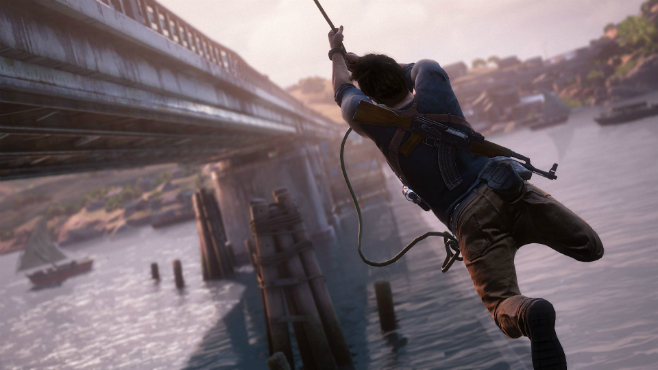 Another area of excess is vehicles. There’s no reason for any of the vehicles to exist in Uncharted 4 except to flex the PS4’s muscles and Uncharted’s landscapes. Boating around for several minutes until you stumble upon the next clue isn’t fun. Driving around an essentially empty map dotted by shoot outs and “how do we get the car across” puzzles doesn’t add anything besides tedium.

The cars and boats handle great, but both are features which don’t add anything to the game itself, much like golfing didn’t add anything to GTA V. Car chases are fun (and the game has a few really great ones), but driving and sliding around through the mud’s primary purpose is to show off how awesome the mud and water effects are. Why didn’t this happen before? Because it’s dull.

All of these design flaws are encapsulated in an early, superfluous sequence when Nate plays 1996’s Crash Bandicoot. At first, I thought the game was 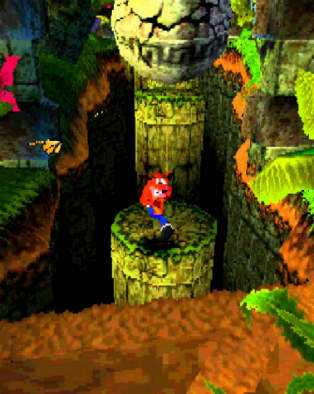 broken when I was unable to control Crash. Then I realized that Naughty Dog was being, well, naughty, by forcing players to use the original Crash Bandicoot controls. Ergo, the awful directional pad.

The level Nate plays is notable because Crash gets chased by a giant boulder and must run and jump toward the camera to avoid it. This mirrors two sequences in later in the game, except with trucks. Twenty years later the sequence hasn’t aged well. Instead of being a cute, knowing nod at the back catalog, it showcases Naughty Dog’s lack of desire to learn new things. It happens at least once in every Crash game, as well as Uncharted. Instead of innovating, Naughty Dog is happy to iterate.

Separately each of these complaints may be minor, but as a whole they are glaring in the face of how polished other portions of the game are. What it all demonstrates is that Uncharted 4 may be artfully directed and beautifully rendered, but it was carelessly designed. A little extra thought based on a 20-year portfolio would not only immediately solve these problems, but it would make Uncharted 4 into a real masterpiece.