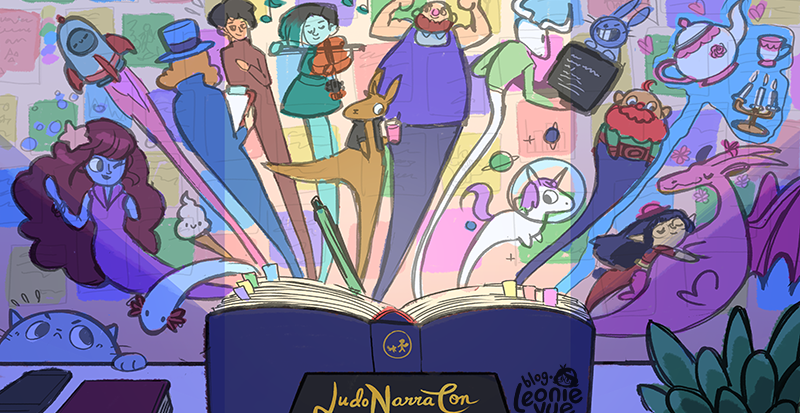 Games are obviously at the heart of any gaming event, and the digital convention LudoNarraCon showcased plenty of games on Steam this year. But the first thing that might have caught people’s attention about LudoNarraCon could have been its intricate posters. Though only wrapping up its second year, LudoNarraCon has heavily promoted itself with lushly illustrated art since its inception. The event debuted last year with Will Kirkby’s moody and intriguing poster. For 2020, LudoNarraCon organizer and indie publisher Fellow Traveller turned to Melbourne-based artist Leonie Yue for a different look.

Yue wrote about the development of the LudoNarraCon 2020 poster on her blog. She shared that Fellow Traveller wanted the event’s new promo art to visually represent the work that game developers do — like diagrams and audio — and the worlds they imagine. They also requested that a version of the dog and girl from the Fellow Traveller logo be included in the illustration. Prior to this year’s LudoNarraCon, Unwinnable got in touch with Yue over email to further discuss her process behind a gaming convention poster. 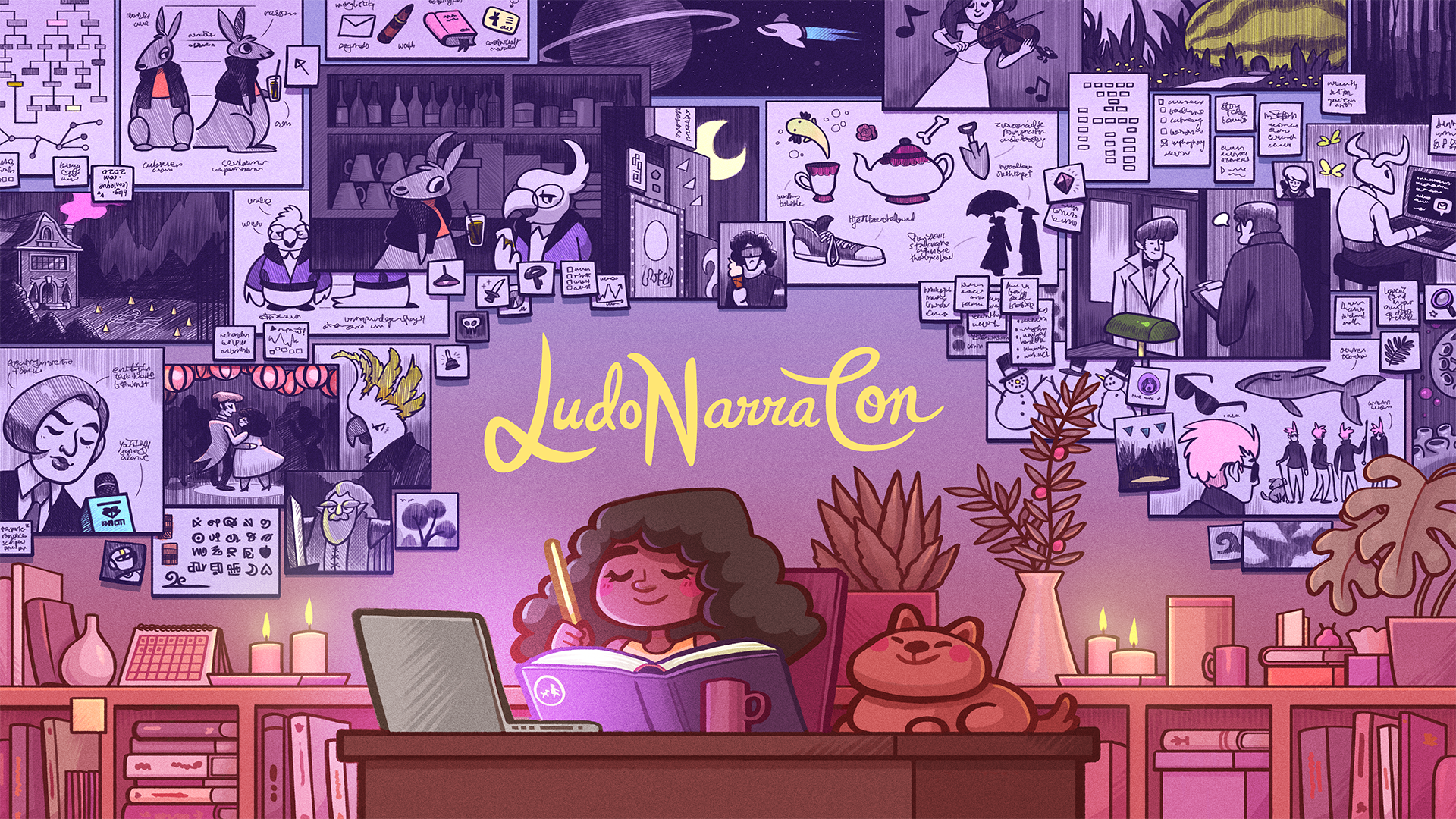 Alyssa Wejebe: What drew you to illustration?

Leonie Yue: Originally I was discouraged and conditioned from doing art as a career, became a high school teacher [instead] and finally switched to building a creative career when I burnt out. Still, I got inspired to draw and illustrate thanks to Disney animated films, morning cartoons/anime, comics/manga, illustrated storybooks and games since I was a kid. I enjoy the process of interpreting and stylising characters and moments through drawing and illustration!

A.W.: How did you approach fulfilling Fellow Traveller’s requests to create an illustration representing LudoNarraCon?

L.Y.: A lot of struggle was involved during my experimental thumbnail stages and some rounds of sketches, feedback and iteration with the team at Fellow Traveller. Ultimately they suggested the combination of a concept art/game development wall and a game developer workstation which helped plenty with simplifying and communicating the core themes of the conference. From here I sketched the final concept, did the lineart, completed the illustration, got approval, made minor changes and delivered the artwork.

A.W.: Did you choose the largely purple color scheme for the promo art?

L.Y.: Yes, because I was drawn to purple and blues due to the magical feel of it. Also LudoNarraCon 2019’s promotional art was mostly black, browns, oranges and yellows. 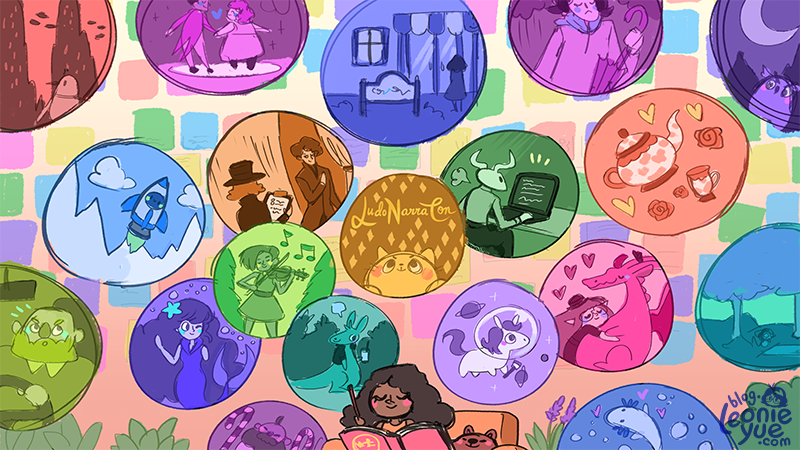 Some of Yue’s early work on this year’s LudoNarraCon promo art.

A.W.: You also previously worked as an artist for Mighty Games and illustrated GDC talks before. Did those experiences provide any inspiration for your LudoNarraCon poster?

L.Y.: I probably based some things on when I was working in an indie game studio environment like Mighty, the people I’ve met in the industry and how they enjoy creating games for players while also striving hard to keep things financially viable.

A workstation of a developer really depends on the individual so I kept the actual workstation in the illustration simple with just a table, laptop, mug, book and cute bread dog.

A.W.: According to your blog, you “made up a lot of random game concepts” for the LudoNarraCon key art. Do you think any of those concepts could be expanded into a full game or another project?

L.Y.: Maybe a few of them! As much as it hurts sometimes, in reality most concept art gets thrown out and is disposable during the game development process. Perhaps the kangaroo and cockatoo game if there’s a great narrative writer to fully develop the story? 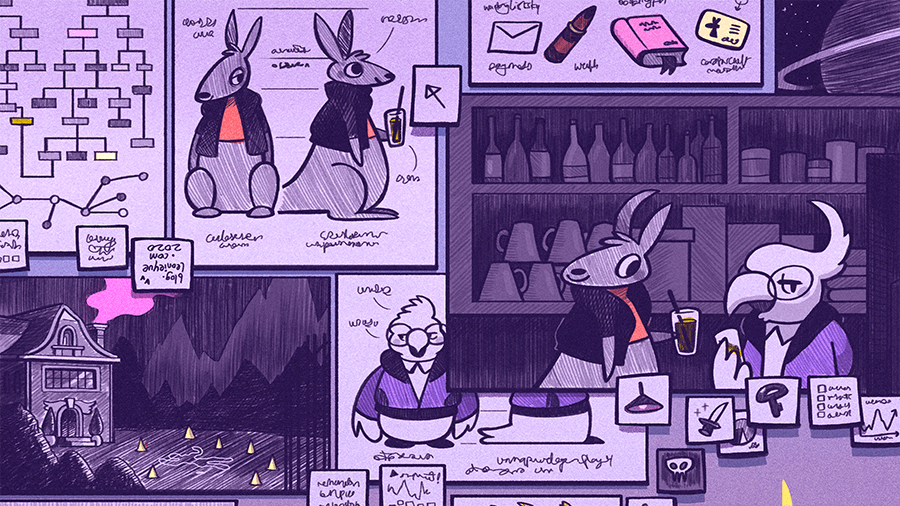 A.W.: What was your favorite thing to draw in the promo art?

L.Y.: My BreadDog! I also enjoyed going all in with the sketchy art style of the concept art/game development wall.

A.W.: Fellow Traveller founder Chris Wright mentioned that the art for LudoNarraCon had to be used in a variety of places, like websites, social media, etc. He added that the art also had to have elements that could be pulled out for different things. How did you approach making the illustration flexible enough for all of that?

L.Y.: It was super tricky! At one point I tried to be modular with the story bubbles but it was too hard to read the core theme. At the least, I kept the logo, girl and dog in the bottom middle since the illustration will also be in portrait mode. I also kept lots of elements as separate layers so [Fellow Traveller] could format it as they saw fit.

A.W.: Do you have plans to check out the panels and demos at LudoNarraCon?

L.Y.: Unfortunately not, but there are quite a number of featured games that are super great, unique and compelling! Please support and check the games and speakers out for some game narrative goodness!

A.W.: What advice would you give to any aspiring illustrators?

L.Y.: General helpful advice is difficult to give so let’s go for a motivational one: keep shining, inspiring and sharing your own creative light with those who matter. There’s no other artist like you so please protect what keeps you going! This is a general lesson that I have to keep reminding myself during times of doubt. 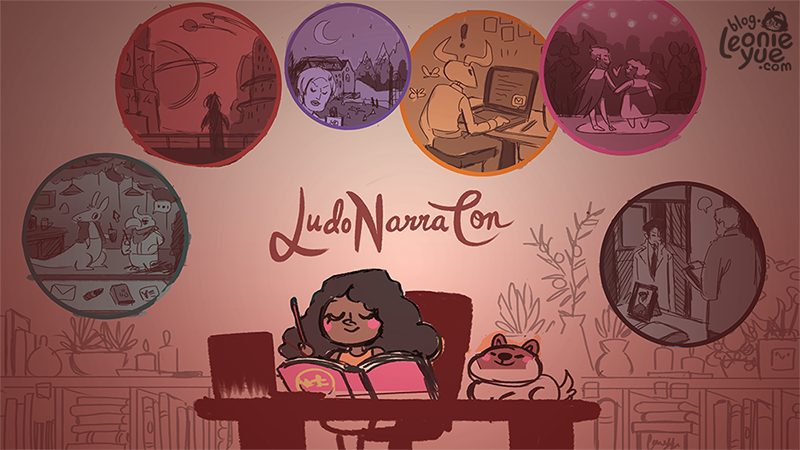 The Flower Collectors: An Interview with Gregor Eigner
Previous Post

Become a Raccoon Detective in Backbone: An Interview with Developer EggNut