Code Orange have proven themselves as the most interesting band in hardcore of the last decade. For what my dollar’s worth, I think they’ve also proven themselves as one of the best hardcore bands of all time, deserving of their own chapter in the heavy music history books. They’re a band unafraid to go harder and further than their contemporaries. They’re a band unafraid to flaunt their own importance, to flex their talent.

Ever since the release of their first album, I Am King, back in 2014 (technically their ninth release as a group, as they put out numerous EPs, splits, and one full length as Code Orange Kids before changing their name to Code Orange because they grew up, I guess?) Code Orange have found a comfortable place at the top of the genre. Over the past six years, they’ve put out albums that stand far above the rest of not just hardcore, but the heavy music world. From where they’re sitting they have few peers. It’s Code Orange’s world, we’re just living in it.

Part of this, I think, comes from the band insisting they were the shape of music to come. Kind of an “if you act famous people will think you’re famous” mentality. You don’t make statements like “I am King,” call a genre “my world,” or proclaim that “Code Orange is forever” and “the new reality” if you don’t already have a high view of yourselves. Done wrong, this could be an obnoxious exercise in self-importance. Done right, this is still an undeniable exercise of self-importance. But Code Orange also seems to know when they have a good thing going.

I remember when I Am King came out. It was all anyone around hardcore could talk about. It marked a new direction for the band, seeing the Pittsburgh outfit mix genres. Three of the band’s then-four members did vocals, sometimes all at once, sometimes trading off as quickly as a per-line basis. There was the song “Dreams in Inertia,” too, which at the time felt like a curveball. It had singing! It was, like, kinda soft! It showed a young band unafraid to experiment with their sound, to see where it could take them. 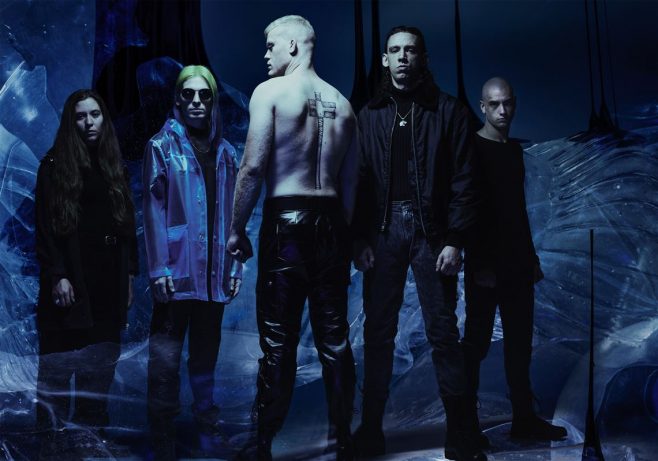 Code Orange’s next album, Forever, felt like the end of one world and the beginning of the next. This feeling was exacerbated by the fact the band was kind of saying as much. Drummer-vocalist Jami Morgan proudly exclaimed on the album’s first single and title track that “Code Orange is forever.” It’s hard to argue he was wrong. The album continued what Code Orange started with I Am King, releasing an album unparalleled at the time in heaviness, while also dipping its foot deeper into melody and cross-genre experimentation. The introduction of synth elements from guitarist Eric Balderose opened Forever up to a higher range of sounds and dynamics than most hardcore records. Forever won numerous album of the year awards. The band toured with legendary metal bands like Gojira, System of a Down and Slipknot. They were nominated for a Grammy. Code Orange had everyone’s attention, and they weren’t letting go.

It’s interesting then that Code Orange’s newest album, Underneath, seems to be fighting with itself. It is still very heavy, which is to be expected. It also has the highest amount of songs with singing in them. But it also features Code Orange’s biggest experimentation with synth and electronic music. However, its implementation on the album isn’t exactly one that amplifies the other parts of the album. Rather it at times sounds as though it’s trying to consume the rest of the song, often overtaking or interrupting a part mid-phrase. It can be jarring and hard to listen to at times. But it works.

Code Orange has always had a strong vision of where they want to take their band sonically and visually, and this is most apparent on Underneath, the closest the band’s ever gotten to a full-blown concept album. The album centers around the “Cold.Metal.Place,” a song on the record and its overall thesis: that technology has completely taken over our lives and left us paranoid shells of what we once were. Technophobia isn’t exactly the most unique angle in 2020, and lyrically Code Orange doesn’t really offer anything profound on this album, but sonically the band has somehow found a way to capture what it feels like to be locked in our current online life. At times the album sounds like an anxiety attack. Thick, weighty guitars will launch into an ever-shifting breakdown, moving across rhythms and tempos before being lost in a sea of static. Samples of people screaming, what sound like 911 calls, and monologues from Bjork stalker Ricardo López only intensify this mood of oppression, that on our current trajectory things will only get worse. I found nothing hopeful on this album, only a nihilistic view of the Cold.Metal.Place we all inhabit together.

Underneath doesn’t necessarily feel like anything new for Code Orange; it’s not a grand departure for the band on the way to a new direction. What it does feel like is the ultimate refinement of the band’s sound. It’s the best, most cohesive product the group’s put out to date, achieved by iterating on what made the previous albums work. When it’s heavy, there is nothing in the hardcore world heavier. A Code Orange breakdown hits you like a ton of bricks from all sides, never letting you become complacent. It’s constantly changing forms and tempos. When it’s melodic, Code Orange feels primed and deserving of radio rock play. “Who I Am” and “The Easy Way” are absolute arena anthems. And when the electronic elements come in, here on this album more prevalent and pronounced than on Forever, it never feels like favor text. Sonically, its the core statement of the album, taking over in ways we don’t expect and can’t prepare for. Underneath is Code Orange’s world, we’re just living in it.

Code Orange, I Am King, Underneath