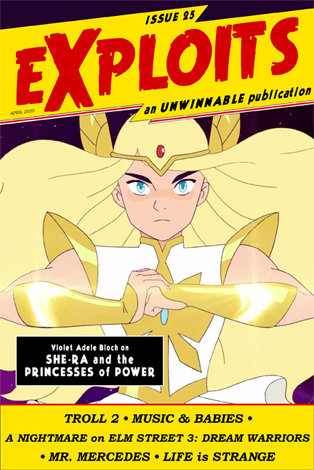 This is a reprint of a feature story from Issue #25 of Exploits, our collaborative cultural diary in magazine form. If you like what you see, buy it now for $2, or subscribe to never miss an issue (note: Exploits is always free for subscribers of Unwinnable Monthly).

A way to know the goodness of a show’s heart, I think, is to look at its filler episodes – the moments when the showrunners had no time and no budget, but needed to fill 22 minutes. “Flowers for She-Ra” (S1E4) is such an episode. Its animation is lacking, especially compared to the series’ gorgeous two-part premiere, but its moral is the best distillation of the series’ message: “If fascists hurt you, hit them with flowers until they stop.”

She-Ra is about to enter its fifth season, and that’s because it’s good. It’s one of the goodest shows ever produced. It has pretty colors, and good faces, and queers who have lots of mushy feelings about one another, and it’s very good, and I love it.

That said, the core of She-Ra’s goodness – despite its ample prettiness and cuteness – lies somewhere beyond its aesthetics. Mainly, it’s in the world’s groups and partnerships. This is even echoed in its title: not She-Ra: Princess of Power, but She-Ra and the Princesses of Power. In the 80s, She-Ra was a lone figure, but in 2020, she’s the face of a coalition, and moreover a coalition predicated on shared vulnerability. The Horde’s armada is fairly homogeneous, but everyone else in Etherea is vulnerable to its encroachment.

This isn’t to say the villains aren’t sympathetic or vulnerable, because they are. Scorpia and Catra’s cloying, semi-romantic subplot is some of the best near-explicit queerbaiting in animation history. Catra’s relationship to Adora is also singularly beautiful, painting a picture of jealousy, desire and abuse in wrenching broad strokes. She-Ra knows that not everyone is always good, or always evil, but it also knows that this doesn’t change who’s in the right. It’s a show about a community of protection, and about the heartbreak of loving and being loved by those who would take it from you.

In this way, She-Ra leaves forgiveness open, but it allows for self-defense. We can forgive those who hurt us, but only after we’re safe from them. Until then, we can only fight for our allies, and ourselves.

She-ra, She-Ra and the Princesses of Power