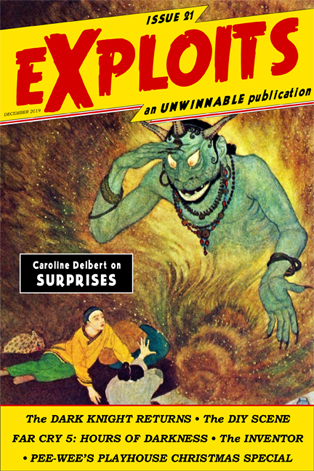 This is a reprint of a feature story from Issue #21 of Exploits, our collaborative cultural diary in magazine form. If you like what you see, buy it now for $2, or subscribe to never miss an issue (note: Exploits is always free for subscribers of Unwinnable Monthly).

There are countless things I love about the Pee-wee’s Playhouse Christmas Special, but the fact that the second assistant director is honest-to-god named Kris Krengel is low-key my favorite. My actual favorite is the opening number featuring the UCLA Men’s Glee Club impersonating U.S. Marines. After the prime-time special aired, executive producer Steve Binder ended up getting a phone call from the commander of the Marine Corps out of Washington D.C. reprimanding him for the hoodwink, though the officer was quick to point out his own kids loved it.

From the stop-motion animation of a snowy scene outside the playhouse to those dancing (fake) soldiers to Madonna backup singer Niki Harris dressed like a Supreme in gold sequins and a bouffant to Pee-wee’s endless announcing of the playhouse puppets and guest stars – one of those gags that goes on so long it becomes a hilarious test of the audience’s endurance – the opening sequence is true perfection top to bottom.

The rest of the episode pays dividends, too. The aforementioned guests all seem like they’re having the time of their lives whooping it up with Pee-wee and the gang, especially k.d. lang who uses the Puppetland Band as her backing musicians and plants a big wet one on Pterri the Pterodactyl after she finishes a rousing rendition of “Jingle Bell Rock.” In just one of many other fabulous bits, Grace Jones seems like she was beamed in from the coolest possible future with her killer avant-garde outfit and special arrangement of “The Little Drummer Boy” gifted to her from none other than David Bowie after she sat next to him on a plane and told him she’d be appearing on the show.

The whole thing is a loving pastiche of Christmas specials that came before, paying homage while simultaneously bringing the form into a hip and artsy now – much like Pee-wee’s Playhouse did with children’s television in general.