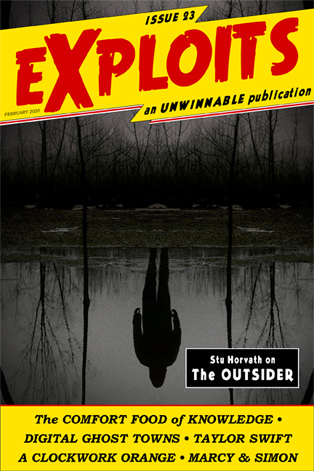 This is a reprint of a feature story from Issue #23 of Exploits, our collaborative cultural diary in magazine form. If you like what you see, buy it now for $2, or subscribe to never miss an issue (note: Exploits is always free for subscribers of Unwinnable Monthly).

The Outsider was the first Stephen King novel I read in ages. Despite a jarring moment about halfway through, I enjoyed it more than most King novels I’ve read. That jarring moment was Holly Gibney. I could feel a shift in the writing when she first appears, to the point that I felt like she was an intruder from another novel. Which, well, she was. Three of them in fact – Mr. Mercedes, Finders Keepers and End of Watch – as a major but supporting character.

King’s seeming compulsion to connect everything he’s ever written threatened, momentarily, to frustrate me right out of the book. Holly comes bearing exposition that shifts the murder investigation from the mundane to the supernatural, making her feel more like a solution to a plot problem rather than a genuine character. That disconcerting feeling passes as Holly grows to become the heart of the story, but I couldn’t help but wonder how the book would have felt had Holly been an entirely new character without 1,500 pages of previous history. I suspected I would have liked The Outsider more if she were.

It seems I am now getting that chance. The HBO adaptation of The Outsider severs the connection to the Bill Hodges trilogy (and its own TV adaptation), leaving Holly to stand on her own. It puzzled me that the show is ten episodes long – how were they going to stretch the novel to fit, especially when the first episode seems to cover about half the book’s events (in order to get Holly in the show sooner)? In the book, Holly’s past encounters with the supernatural allow her to convince the skeptics on the investigative team and fast track to the climax. Removing that history forces the show to hit the breaks and have Holly put together a more compelling case, following the otherworldly killer’s trail of victims further back while wrestling with her own, as yet unexplained, traumas (as of this writing, we’re only four episodes in).

It is a strange thing. You’d expect a novel to be the place to find the measured pace, subtle details and curious digressions, but with The Outsider, King’s 560-page novel nearly trips over itself to get to the end while the TV adaptation is content to take its lugubrious time. Hopefully this makes for an even more satisfying journey before we arrive at the inevitable destination.

Stu Horvath is the founder and editor-in-chief of Unwinnable.