Wander No More follows the story of Kouichirou the “samurai” after he leaves a group of bandits called the Kodokushi (that’s what they are, even if he won’t outright acknowledge this) in a pseudo-feudal Japan setting.  His departure from the bandits results in a village he passes through being burned to the ground, killing almost every resident therein. He stumbles across a girl named Chiyo and, driven at least in part by guilt, takes her in under his wing, ostensibly as his daughter (even though he’s only about 10 years her senior).

I really loved Wander No More for the majority of its run.  There’s no greater goal motivating Chiyo and Kouichirou than a simple desire to rebuild the village to a functional level and survive, a daunting challenge in no small part due to their limited survival skills.  Neither of them know a thing about weaving or carpentry, for example, which makes repairing the houses or making new fabric an uphill battle. Even when they begin to take in outsiders nothing gets easier, since half the refugees are elderly or children with limited skills and abilities to offer in rebuilding Hotsu village.  In this environment, you can appreciate their measured optimism in the face of a decidedly disadvantageous situation, particularly Chiyo’s attempts to gather food and happily watch over the younger children when she’s down two parents and one hand. 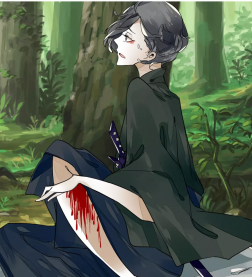 All of the characters grow on you as the story progresses, whether it’s Chiyo, the local boys who idolize Kouichirou, the elderly woman trying to help Chiyo reconstruct and then work the loom, or Kouichirou himself.  You get to watch the village heal, to see Kouichirou become increasingly worried about their settlement drawing unwanted attention from the Kodokushi (especially when one of their scouts stumbles in), and witness how interpersonal conflict between just a few members of the community can have a lasting, rippling effect throughout the whole village.  Everything about Wander No More is well-paced and well-written, with bouts of melancholy or suspense perfectly broken up by tiny moments of humor. It’s beautiful and heartwarming.

And then it all goes up in smoke.

We’ll come back to this in a moment, but first I need to talk about the other visual novel I read this week, Written in the Sky.  Written could probably best be classified as a sci-fi romance, following the story of the teenager girl Azure over the course of three days.  Azure is a loner who hates school, has (at best) a lukewarm relationship with her father, and seems to lack so much as a hobby to pass the time.  One day she accidentally stumbles into a warehouse and discovers a magic ring, which makes her the king of Mars (provided she marries the Martian queen, who obviously looks like a well-endowed teenager and can’t quite figure out how planet Earth or its language works).  The pair of them marry after knowing each other for less than two days, have a skeevy sex scene (by which I mean Azure has the whole “looks 12 BuT Is AcTuAlLy 18” thing going on, thank god the VN lets you shut off the adult content) and then Azure goes to Mars. That’s it.  That’s the whole story.

Here’s where I’m going with all this.  I read a lot of visual novels that never end up being reviewed on Unwinnable, or even brought up in causal conversation with friends.  Most of the time it’s because they were so short that I left the experience with nothing meaningful to say about them, since the VNs failed to leave any kind of lasting positive or negative impression on me.  Both Wander No More and Written in the Sky clocked in at ~30 minutes to read each (not much time in a genre known for 60-80 hour behemoths) and were both kinetic VNs (greatly diminishing their replayability among VNs, unless you’re particularly wowed by the story).  Typically with visual novels that short, I’ll wait until I have a pair that share similar themes and put them in a review together, because I simply can’t drum up enough to say about only one.

It’s unfortunate that longer visual novels can garner more attention just by having more content, even if they are objectively worse in all aspects.  Two of my favorite VNs, Perceptions of the Dead 1 and Juniper’s Knot, both require less than an hour to read, and I struggled to find enough to say about either of them to merit a review (incidentally, go check them out, they’re fantastic examples of good storytelling in this genre and had beautiful art and music besides).  On the other hand, Notch – The Innocent LunA: Eclipsed SinnerS was a VN so wretched I still go back to it as an example of all the failings this genre could possibly stuff  into one written work, and that ended up being one of the longest reviews I’ve ever written.  I want to bring attention to the darling little stories you can find buried among longer VNs, but it’s so very easy for them to be shut out or “eclipsed” by other titles, which are perhaps less worthy of your attention but leave more of a lasting impression directly because of your length of exposure, much like tuberculosis.  In the world of VNs, more words means more content to critique, and unfortunately lengthy, subpar VNs will typically get more attention than the best short VNs, which themselves are a rarity.

That’s another big issue I’ve found after years on the lemmasoft forums or browsing visual novels on itch.io.  There’s nothing wrong with starting small and working your way up to bigger pieces in writing, but most visual novels with a sub-60 minute read time aren’t exactly the Flowers for Algernon or The Most Dangerous Game of this genre.  Often I’ll encounter a story where character backgrounds or details of this specific universe are hinted at in a few brief lines, but never expounded upon in any meaningful fashion.  Written in the Sky, for example, has a throwaway line about Azure’s mother being shot by someone with a grudge against her detective father, which is never brought up again in the story, likely because it has no bearing on Azure’s personality or personal choices.  In another example, Written ends with Azure observing a giant gundam that she’ll be expected to pilot in the war against Mars, but we never get more insight or details than that bare bones information. 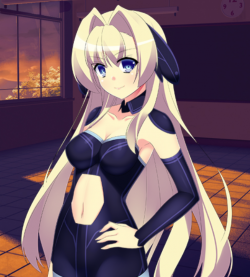 Visual novels like Written in the Sky don’t feel like half-hour stories, but rather half-hour snippets forcibly carved out of adventures which could only have been properly conveyed over a few hours.  Perhaps the author felt they couldn’t delve into the details any deeper, or perhaps they lacked the skill or patience to create something longer or more nuanced than the bits and pieces of plot thrown our way in the actual finished project.  Whatever the case, the result is a lackluster VN which unfortunately merely offers the unrealized promise of being something better. Throwaway lines or blink-and-you-miss-it details do not count as meaningful world-building, and oftentimes would have been better left on the editing room floor so more energy could be spared for tightening up other facets of the story.  Written in the Sky especially felt like something that might have been an enjoyable ride if more work was devoted to flushing out Azure and Queen Sienna’s relationship on Earth, or giving Azure more of a personality than “I’m bored with life,” maybe even showing Azure trying to adjust to life on Mars. But there’s so little here, it almost feels like the what-ifs eclipse the story we were actually given.

It’s as though writers sometimes forget that when you set out to make a short story, it’s not about telling as much as you possibly can in a limited period of time, but using that time to espouse the pertinent details as best you can and leave your audience satisfied with the work.  Much as you might like to, oftentimes it’s not in your best interest to hint at all the subtle nuances of your fictional world if you don’t want to take a few more hours to properly flush them out.  You don’t have to pack the story with characters who ultimately don’t merit even two minutes of screen time, or bury the audience under exposition that will never be brought up again or contribute to the narrative in any clear, discernibly meaningful way way.  It just leaves the reader disappointed, not unlike what one feels after watching a movie adaptation of a book series which really would have been better told over the course of a longer TV run.

Wander No More, on the other hand, manages to operate within a tight framework and satisfy the reader from start to finish.  Originally, I hated the ending for Wander No More; it felt almost cheap to have the mood shift so abruptly from happy village to everything is destroyed, and the few lines of dialogue meant to deliver a twist about Kouichirou had little impact given that the twist had been hinted at earlier.  But looking back on it now, I can see that a darker turn was pretty strongly foreshadowed even from the start, and the ambiguous ending sits a little better with me now. On a second read everything flows together quite well, and truly feels like a properly crafted short story.

Wander No More keeps itself limited to a very small geographic area.  Any personal details revealed about the character always tie in to some important aspect of the overarching narrative, and we only delve into in-universe lore when it’s specifically relevant to the plot.  Our cast is small and tight-knit; we’re given just enough details about each of them to understand who they are as people without becoming smothered in unnecessary, shoehorned-in backstory.  Because of choices like these, Wander No More can focus on flushing out its limited cast and simple narrative in a way that’s actually satisfying to the reader.  Unlike Written in the Sky, Wander No More seems to understand that there’s only so much you can do with a story bound by a 30-minute time limit, and manages to flourish within those limits.

The visual novel genre needs shorter stories; you cannot honestly expect someone to jump into a completely new gameplay/reading experience like this if the best you can offer is a 6-hour endeavor (which, it’s fair to point out, may only pick up after the first hour of reading has come and gone).  And that’s not even taking into consideration that even the most seasoned veterans of VNs don’t always want to read epic-length novels.  Sometimes, all you want is a quick little read that you can both start and finish while on a commute or sitting in the waiting room in your doctor’s office.  But having short VNs with questionable plotlines, incomprehensible plot twists, flat-as-cardboard characters and unsatisfying resolutions certainly isn’t enough to entice anyone to stay and try the more demanding stories like the Fate series or Hashihime of the Old Book Town, or perhaps give a chance to newer writers who are only beginning to experiment with the VN genre and smaller projects.  Writers have to work within their limits; it’s absolutely possible to make a mind-blowing story which takes less than an hour to read, but only with proper editing and a good sense of what elements matter, versus what ought to be trimmed away.  Clearly, that’s easier said than done.

Written in the Sky and Wander No More are both available on Steam and itch.io  I’d strongly recommend reading Wander No More as a good example of what VNs can do in just half an hour.

The Quiet Sleep is a Messy and Emotional Tower Defense Game