The Quiet Sleep began, quite frankly, as a confounding mess. By presenting only the barest of context, it plunges you straight into its ambiguous narrative, all the while seeking your patience to get to its crux. But understanding the game’s mechanics isn’t easy; I think I spent at least five rounds messing around and rebooting the scenarios before figuring out its cadence.

You begin by choosing from three scenarios – move to another city, become a full-time musician or falling in love – with The Quiet Sleep revealing only a cluster of mostly plain green hexagons and other grey, outlier ones. These grey tiles are goals you need to fulfill to proceed through the stories; it could be anything from doing the chores or reading a letter from home. But these typically require resources like energy or will, which you can harvest by plotting a path – for a metaphorical train, no less – towards a variety of resource mines, such as “energy springs,” “will mines,” and “thinking of home.” Increasingly, new clusters of hexagons will sprout, with these eventually forming a constellation of multi-hued shapes.

So what gives? What do these hexagons represent? And where exactly are you? Turns out everything is just taking place in your head. Your emotions, priorities and worries are depicted as a swirling mess of assaults against your very being – akin to a castle or base under siege that you must protect. And like most tower defense titles, there are also defensive structures and towers you can construct on these hexes. These won’t be graphically represented as tall, imposing buildings however; instead, they’re just doodles etched on these shapes, like a shorthand to these familiar tower building features. Then there are the trains, which function similarly to the synapses that send impulses from one neuron to the next in your body. Rather than keeping up with a more refined and visually appealing appearance, The Quiet Sleep favors a utilitarian approach to its presentation – one that’s also heavily laden with meaning and metaphors. 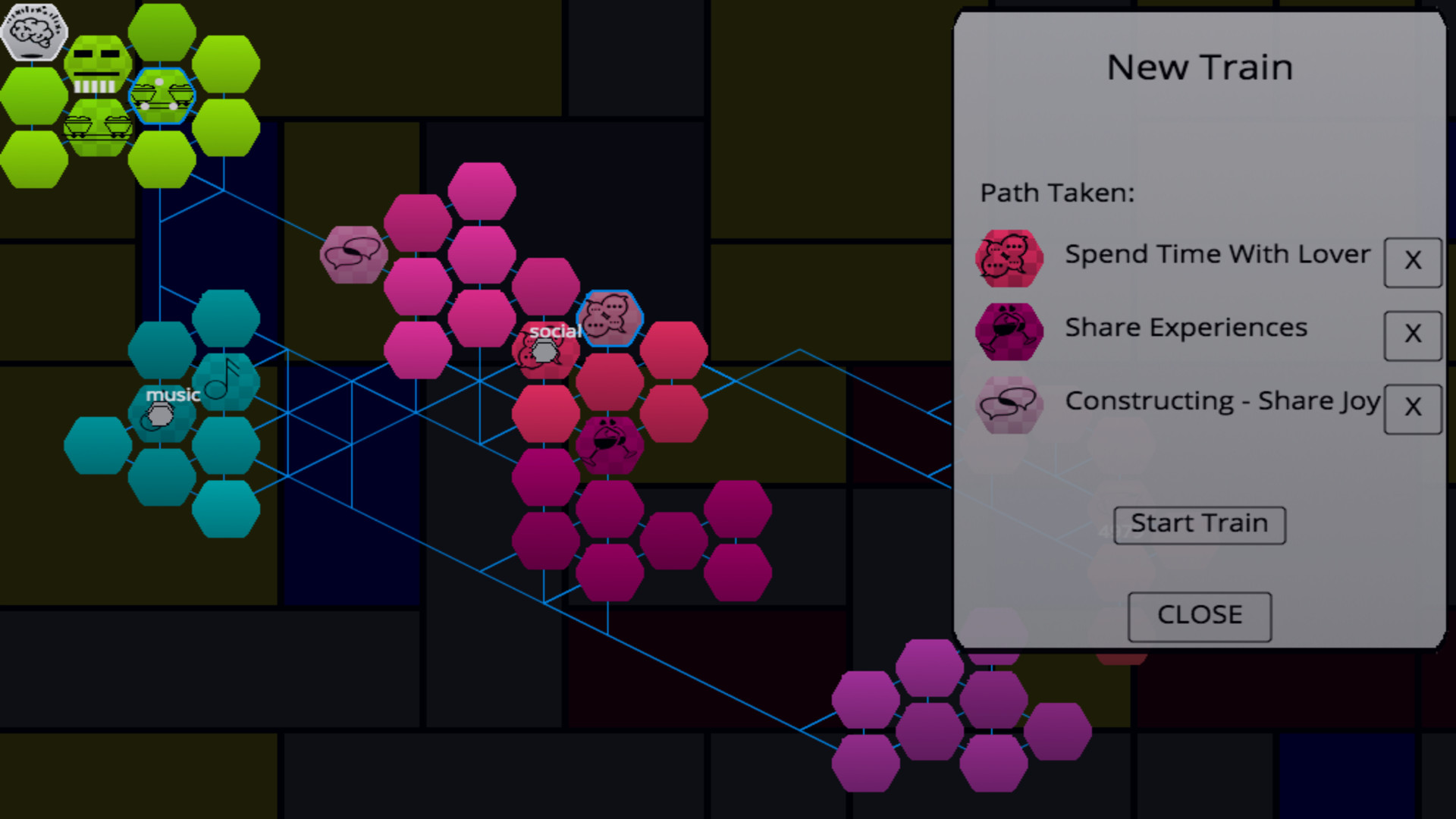 But what it lacks for clarity, The Quiet Sleep makes it up by being a compelling and even frenetic experience, as you try not to crumble under the pressures conjured by your own mind. If you’ve ever felt paralyzed by the immense weight of anxiety or sadness, that’s what playing The Quiet Sleep can sometimes feel like, especially with its mounting challenges in the later chapters. Rather than avoid these emotions, Nikhil Murthy, the developer behind the game, shared that he wanted to center the managing of these feelings. “I had been thinking for a while about representing thought processes mechanically,” he wrote in a Gamasutra article. “I immediately went to the idea of having the emotions serve as the creeps of the tower defense and having calming activities serve as towers.” To stem the tide of powerful emotions like frustration, anger and sadness from encroaching your base – the hexagon labelled as “the self” – you can bolster your defenses by generating charges in your towers, which are presented as the calming activities Murthy mentioned, like painting or taking a leisurely walk. But these aren’t necessarily negative or antagonistic; they’re simply emotions you possess, and can even be crucial to the game’s completion.

By distilling the essence of the tower defense genre in a few rudimentary shapes, The Quiet Sleep dispenses with all the shine and glean of more polished titles. Our emotions are messy and complex enough, it argues; no amount of visuals can adequately reflect that on the screen. To that end, perhaps a more pared-down approach would more than suffice in helping us confront – and sit with – the full spectrum of our human emotions.

Wander No More/Written in the Sky