It’s that wonderful time of year where I get to focus on visual novels centered on the creepy, the terrifying, and the downright spooky.  Ghosts, demons, mysterious happenings and the like all take center stage this month; sadly, however, our first VN was less horrific because it presented a dark story well, and more because it represents a colossal and exhausting waste of hours that I’m never getting back.

Kotodama: The 7 Mysteries of Fujisawa is a middling mystery utterly dragged down by the tools you must use to solve it.

The premise of Kotodama is pretty standard anime fare: you play a nameless new kid who’s just transferred into a new high school, where you meet an energetic classmate who quickly suckers you into joining her club.  In the case of Kotodama, that club is the Occult Research Club, which is dedicated to unravelling the titular 7 mysteries known to students on campus regarding their school.  They range in severity from a principal whom no student has ever personally seen to a curse supposedly perpetuated by the vengeful spirit of a student who committed suicide.  Together, you and your friends seek to uncover whatever threads of truth lie at the heart of these strange phenomena.

The selling point of this visual novel is your supposed ability to get the truth out of anyone you come up against, once you use your power of ‘Kotodama’ on them.  If I were being kind, I’d say that this power is represented as a shoddy match-3 game and leave it at that. But Kotodama has left me in a less than charitable mood, so instead we’re going to talk about why this mini-game and attached mystery are such disasters and represent bigger issues with the VN as a whole.

The very first screen that pops up when you start Kotodama is a disclaimer meant to assure you all the characters in the game are at least 18. “Ah,” says the seasoned VN reader, “the old ‘everyone is definitely legal age so this isn’t underage porn’ disclaimer.  Guess we’re going to be seeing naked people.” This in and of itself is a very lazy way to get around the problem of nude teenagers, but Kotodama takes that laziness a step further by constantly telling the reader that the students are all in different grades throughout the story.  So on the one hand I’m being reassured that everyone is 18, for legality’s sake. On the other hand, the narrative is constantly reminding me that no, the characters are all different ages and have different social standings at school.  It’s like someone at PQube got through the whole localization side of things and then remembered just before Kotodama hit the market that you’d probably catch a lot of flak for selling a game about stripping underage kids.  Clearly the solution to such a conundrum is to just post a single disclaimer tag at the beginning of the game and hope either no one notices anything amiss or the reader will assume several of our students have been held back once or twice.

Getting back on track now.  Kotodama’s whole mystery-solving element involves you catching a person in a moment of weakness after you suspect them of lying or hiding something.  You use your power to seep into their subconscious and draw out the truth by playing a match-3 game. The more matches you get, the more “layers” of lies you peel back, until the truth is completely exposed.  However, because your character is a total creep (as directly stated by your insufferable spirit guide, Mon-chan) you visualize these layers as articles of clothing that are gradually stripped away until the target has been completely undressed.  This is very uncomfortable, at least in part because the targets visibly become more embarrassed/upset the more clothing you remove from them.  And no, game, it does not reassure me to hear that because I’m only messing with their subconscious, they will never know Detective Block was picturing them naked. 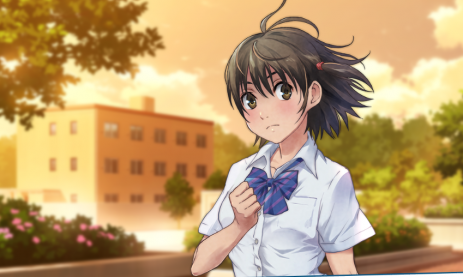 The match-3 game itself is awful; you cannot drag or switch orbs like in a traditional game, but rather only have the option of clicking an orb in one column and having it immediately teleported to the top of the same column.  There were countless moments where I wanted to switch two orbs that rested side-by-side (you know, traditional mechanics for a game like this) but was thwarted because nope, that’s not how Kotodama wants you to play.  You may only click and hope things reposition themselves in a way that’s advantageous to you.

On their own, neither of these things would necessarily be a dealbreaker for me.  I’ve played worse mini-games by far, and as I mentioned earlier, the whole disclaimer that promises all characters are of legal age is something I’ve seen before.  What really killed Kotodama for me was the whole mystery element, aka the reason you’d probably purchase the visual novel at all if you stumbled across it on Steam.

Solving the overarching mystery relies on you collecting certain code words in a magical word book, which will help you find the true answers behind the 7 mysteries of the school.  But you cannot collect all these words on your first playthrough. You can’t even get them all the second time around. Kotodama expects that you are going to play through the first 5 chapters of the game at least 3 times, and it’ll likely be more than that if you don’t have a walkthrough handy.

The in-game explanation for this forced replaying is that you simply don’t have enough information to get the best answers your first time around, and so a demon keeps warping you back in time until you find the correct solution.  But here’s the issue with that: you have to play through all those chapters perfectly in a single go to move forward, puzzles included. There is no skipping.

Oh yes, you can fast-forward through text, but even if you’ve already collected all the words and previously made the correct choices in, say, the second chapter, there’s no way to skip over this section of the story entirely.  You can make a single mistake in the second half of chapter 3, do everything else perfectly, and still have to replay it all from the start.  And solving this mystery is nowhere within spitting distance of being intuitive.  Chapter 2, for example, relies on you visiting several rooms and speaking to several people in a very specific order, otherwise you don’t get one of the prompts necessary to get the “correct” ending to this part of the story.  The game colors previous choices as either grey, red, or blue, and the only hint you get about which color is correct comes from a random fortune teller reading in a phone app stating that red is your lucky color. No, the game never tells you that checking the app is necessary to progress the story, only that you might get new words in your word book by checking it (which, thinking about it, I’m pretty sure never happened). You remember how when Broken Age part 2 came out, everyone was confused about suddenly having to use the switching back and forth mechanic because it was never really utilized in part 1?  That’s how I felt about having to use the app on my second or fourth or tenth go of the first 5 chapters.

Normally I don’t mind having a bit of story repeat in a visual novel; that’s par for the course in most dating sims where you replay the main route to get to a character’s specific route.  But that’s usually just part of the story, and then you can sink your teeth into the meat of new and unique routes once you get past that.  Because you’re often only making a few minor adjustments here, the story and dialogue in Kotodama doesn’t change all that much.  And if you’ve already done this chapter perfectly?  Things won’t change at all.  You’ll be forced to click through the exact same prompts, battle with the same people at the same story junctures, and just pray that this time, you don’t get the same ending at the close of the chapter.  Even with save-scumming it’s difficult to know where you went wrong, and you’ll likely have to reload over and over.  It becomes a slog that you’re desperately trying to drag your way through, because after sinking all this time and energy into the VN you want to know how it’s supposed to end once you break out of the time loop.

Your inability to skip completed chapters is only one symptom of an underlying issue of lazy design that plagues Kotodama.  The hint system consists solely of Mon-chan telling you to look for a special something that’ll let you progress the narrative.  Kotodama has no way of letting you skip over puzzles you’ve already beaten for the most part, though there is a single battle you can choose to skip.  This is somehow worse than having none at all, because it tells me the designers were willing and able to build a skip mechanic but ultimately chose not to include it as an option for the player on subsequent playthroughs for reasons which utterly escape me.  Your mystery-solving boils down to little more than blindly stumbling around and hoping you eventually happen upon the correct order to perform your actions, if you don’t simply break down and look up a guide because you are sick to death of having to repeat all these asinine conversations and half-baked matching puzzles all over again.  Oh, and fuck you if you lose the puzzle because there is no retry button, only reloading your last save no matter how long ago that might have been. You don’t feel accomplished so much as exasperated by the end of it. This is all besides the fact that the story is acceptable at best, with bland explanations for most of the mysteries and a fairly predictable twist regarding the identity of the true bad guy.  Also there’s some off-screen animal cruelty that’s never really addressed and probably should have been included in a warning at the start of the game, but I guess another line of disclaimer text was just too much effort.

Kotodama: The 7 Mysteries of Fujisawa is not only frustrating but shoddily put-together, as far as visual novels with mini-games and mandatory replays go.  I’d pass on this.