Occult Crime Police is a delightful whodunnit about refusing to accept the easy answer in the face of overwhelming evidence to the contrary.

Occult follows the investigation of Sheriff Warren, a small-town officer of the law haunted by her past failings.  Warren operates in Boomtown, a generalized hamlet whose major industry and employer is a local military base, known simply as Base 24.  The VN implies that a failure on a local case a few years back directly lead to a local fall from grace, and given the paucity of remarkable crimes in small town USA it’s been an uphill battle to redeem herself in the eyes of the community.

What I admire about Warren is that she’s a character who clearly knows she’s a pariah surrounded by incompetents, and still chooses to give her work the maximum effort she’s able to offer.  The events of Occult Crime Police are set in motion one night when dispatch announces that Base 24 has recently experienced a murder.  She makes a brief quip when the dispatcher tries to get sassy (“Someone’s dead.” “Yes, that’s generally how murders work.”) but then she’s all business, driving straight to the scene and ready to investigate. 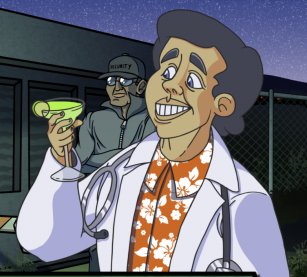 Warren is an incredibly endearing character, because she echoes that one coworker we’ve all had who gave 110% in the office, be it in their assigned work or shutting down whatever tomfoolery had the misfortune of crossing their path.  Warren is fully aware that a lackluster reputation precedes her wherever she goes, and yet she refuses to allow that to prevent her from doing her job. Yes, she may have failed to solve that missing person’s case years back, nameless military guard, but she is still one of the designated authorities investigating this crime.  She tolerates Carlos’ perpetual insistence that he’s on “Island Time” and penchant for drinking margaritas on the job because she knows he’s a good coroner at the end of the day, and it’s better for her to make allies than enemies right now (side note, don’t worry kids, Carlos isn’t imbibing on the job, it’s just the margarita mix he’s chugging like it’s going out of style).  She’s surrounded by fools and incompetents, but they’re all she has to work with in terms of friends or sources of information, and her personal feelings can’t get in the way of doing her job.  You love her because she’s a competent and capable investigator, aware of her own failings and culpability but refusing to allow them to define her present work.

It’s a mercy Warren is so competent, because Occult Crime Police is designed to see her fail at every turn.  It’s a murder on a government base; of course the local sheriff can’t head up the case.  The lead investigator is an F.B.I. agent named Sturmund Drang, and I urge you to take a moment to really appreciate the beauty of that name before reading on.  Drang is your stereotypical cocksure investigator, convinced that he’s the best agent the F.B.I. has ever seen and Warren et al are lucky to even be in his presence.  Half of Warren’s job on this case is simply trying to redirect Drang, either to convince him to look deeper at the evidence or not immediately walk out of the building the minute he’s found an answer to the mystery that halfway satisfies him.

That’s the beauty of Warren as an investigator.  Occult Crime Police constantly enforces the fact that she’s capable and intelligent, whether it’s methodically questioning potential witnesses or trying to poke holes in their account of events.  Every twist and turn you happen upon is carefully documented by your assistant Ash’s Polaroid camera and remarked upon by Warren herself, all towards the goal of building a clearer picture of the chain of events as they played out.  There’s no extraneous evidence or meaningless debris lurking around the crime scene; everything you witness is a clue designed to lead a careful and diligent detective towards the truth. You can buy into the narrative as it gets progressively crazier and crazier specifically because Warren is the one leading you down this path of sentient houses and mind-altering technologies manipulating unsuspecting bystanders.  I wasn’t just told Warren was a good detective and expected to accept that; if anything, the other characters in the story more often than not try to reinforce the opposite, and Warren quietly but surely proves them wrong.

I mentioned in my review of Misadventures of Laura Silver how refreshing it is to encounter a detective story that focuses more on making a satisfying mystery than showing off how clever their characters are.  Warren can and does mess up; you can absolutely have her present the wrong evidence to the person she’s interrogating and cringe as she flubs up her line of questioning thereafter.  Warren is smart but not without flaws, and it’s wonderful to see her screw up but still receive support from Carlos (or even Drang in rare instances). You aren’t guaranteed victory in your investigation; you have to earn it.  And even then, you’re still left with a myriad of other problems (the missing person’s case, most notably) that Warren will need to pursue in later cases. 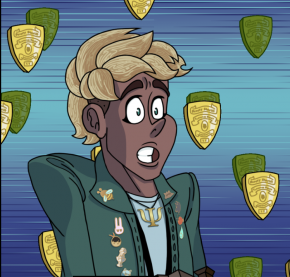 The effort to make Warren such a finely-crafted detective with a fleshed-out history and motivation is just one facet of what makes Occult Crime Police such a well-fleshed out VN.  It’s definitely stylized after the Phoenix Wright series, complete with dramatic poses and musical flourishes every time a new revelation comes to life.  But Occult manages to feel more like a loving homage than a straight duplicate of the formula; the beats are familiar, but not a carbon copy.  The art and animation is beautiful, the music is spot-on, the humor had me chuckling all the way through (“You confused the witness so hard he exploded” still makes me chuckle). Above all, the mystery was just challenging enough to be engaging without frustrating the reader.  The hint system is subtle, feeling less like the game trying to lead you down a specific path and more like Warren is truly pulling her assistant aside and conversing about where they should go from here.

I found Occult Crime Police on the lemmasoft forums, and you can download it from itch.io.  Ostensibly there will be other installments, but given that Occult was last updated in May and the lead artist is currently employed on other projects, it might be a while.  For now, Occult Crime Police functions nicely as a standalone story, and I strongly encourage you to check it out.

The Isle of Dread