I can’t believe it’s the end of the year already and a new one is looming. I thought I’d have more time. I could have sworn summer wasn’t that long ago and now the supermarkets are telling me it’s Christmas by blasting Wham! at me whenever I cross their thresholds. All of a sudden everything’s become a bit manic, but I guess we’re tying up an entire decade. Christ, am I supposed to me making life goals for the 2020s? I think I’d like to be less tired. That might be nice.

And the games! Well there are too many of them for a start. I cycled through no less than five different games to write about when I was thinking about what to do for my December column. So here’s some quickfire crit because everyone knows a bullet point is an adequate substitute for nuance.

Death Stranding: I’ve really enjoyed my time with Death Stranding, it made walking a considered act. Kojima’s games are often so dependent on their systems and telling a story through the mechanics of play that the idea of his studio making films strikes me as a terrible decision. I think his storytelling would suffer without that ludic layer. He also still can’t write women and if anything he’s gotten worse at it. I just wish more people in the games industry were given bigger budgets to make “weird” games.

The Stillness of the Wind: Maybe I should buy a farm and some goats. Retreat from the world and embrace solitude. Seems nice

The Outer Worlds: I started off really liking this game, but I suspect I just really wanted to like it. There were times when it was poking fun at how shitty capitalism is and I’d go “that’s just like at my work, how grim!” By the end I felt like all it had were those jokes and its criticisms of corporatism and capitalism were pretty toothless. I ended up mostly beating The Capitalism, which kind of undermined a lot of what it was saying about omni-present corporate structures. An RPG better than Fallout: New Vegas? Still hasn’t been done. 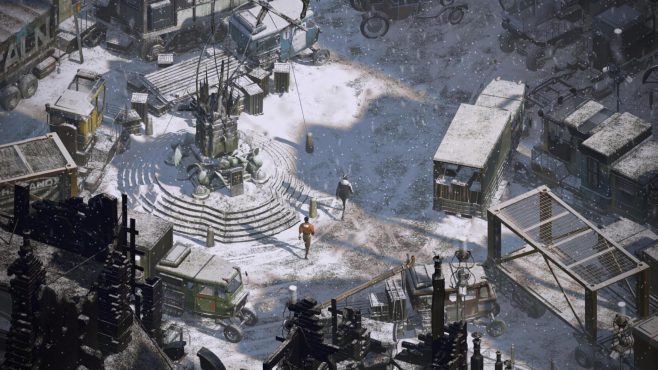 Disco Elysium: This RPG is better than New Vegas. At the tail end of the 2010s I can’t believe we got hit with a handcrafted gem like this. It’s easily the best written RPG I’ve played in the past five years or so. There’s so much I want to say about this game that I’ll end up saying nothing here. It’s exploration of the politics of class, labor and history was intricate and deep. Harry and Kim might be the greatest digital buddy cop due created to date. A single neighborhood caught in the white water rapids of time, only peeking through cracks at a larger and turbulent world. An outstanding piece of work.

Binary Domain: I was just thinking about Binary Domain again. As you do. It’s probably still good. It still stars a French robot wearing a neckerchief. Play Binary Domain if you haven’t, it’s cheap as chips these days.

Resident Evil 2 Remake: For the first time ever I started and finished a Resident Evil game. And I liked it! 21 years after the original game scared me shitless and turned me away from horror games, I’ve laid my demons to rest. The bit in the sewer was a bit pants though.

Untitled Goose Game: Has the greatest narrative plot twist and conclusion of the year. Honk!

Now it’s time to not only bring a close to the year, but also this little column of mine. It’s been over three years since I pitched Checkpoint to Stu as a games and history space. I might have deviated from the premise from time to time, but I do hope you found my work to be occasionally informative or entertaining. Personally, I think it’s reached a natural end point and it’s time to vacate my digital corner. I’m sure it won’t be empty for long. Stu and the team have a knack for attracting wonderfully talented writers to the magazine, so I can’t wait to see what happens in the future. I just want to extend my warmest thanks to all of the editors, writers and readers. You’re dear friends, one and all. Thank you for letting me be a part of this. Now I’ll leave you not so much with a bang, but a nod and a saunter in the vague direction of the pub. Merry Christmas and long live Unwinnable!