I didn’t expect to be writing this back in April when I wrote about Bryce Harper’s first game in D.C. wearing a Philadelphia uniform, but on Wednesday, October 30, the Washington Nationals beat the Houston Astros six to two to become the 2019 Major League Baseball World Series Champions. I didn’t expect it because even though I didn’t emphasize it in my column, the Nationals lost that game back at the beginning of April, eight to two, and they lost a painful number of the games they played afterward, dropping to a 19-31 record by May 23, 12 games below .500 and ten games behind the first place Philadelphia Phillies in the National League East Division.

Washington never did quite catch the division leader (by September this was Atlanta, Philadelphia having fallen to fifth place in a six-team division), but they did win the first of two wild card spots in the National League playoffs, and on October 1 they defeated the Milwaukee Brewers four to three in a single-game elimination after facing a three to one deficit in the eighth inning.

On one hand, the Nationals’ playoff run is full of great stories. The team played two elimination games against the 106-win Los Angeles Dodgers, and won both to advance to face the St. Louis Cardinals in the National League Championship Series. After using an unusual pitching rotation to avoid their disastrous bullpen in the best of five game series against the Dodgers, the smart money would have been on the Nationals running out of gas in the best of seven game series against the Cardinals. Instead, the Nats swept the Cardinals in four games and earned themselves a six-day rest before the World Series.

“Statistically improbable” is the phrase I’ve been using, but one could just as well say that it’s a fluke.

It was a magnificent playoff run for a team that had never advanced in the playoffs since its relocation from Montreal to D.C. in 2005. The 2019 Nats played five elimination games, trailed in each of them, and came back to win all five. This is, suffice it to say, statistically improbable.

“Statistically improbable” is the phrase I’ve been using, but one could just as well say that it’s a fluke.

Now this isn’t entirely intended as a criticism. Baseball as a sport could be considered as a statistically improbable event generator. A .300 batting average is pretty good and .400 has entered the realm of the mythical. This is to say that a really fine hitter will walk back to the dugout roughly six times out of every ten times he enters the batter’s box. (On base percentage, which unlike batting average considers walks, reveals that the very best players can avoid the walk of shame a little bit more than four times out of ten, but even the legendary Ted Williams couldn’t quite make it even odds.) 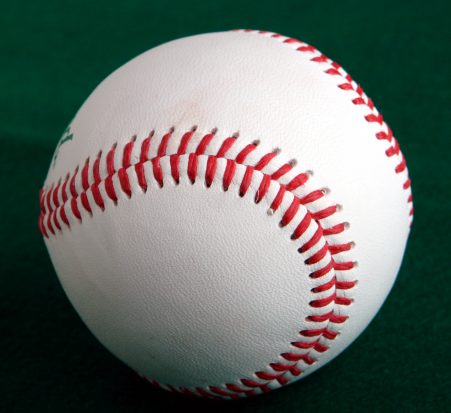 When we watch a baseball game, we hope for the extraordinary — a player who hits for the cycle (single, double, triple and home run in a single game), a triple play, a grand slam, a no hitter, a perfect game. But the lapsed Catholic in me recognizes that we watch baseball in Ordinary Time. We sit, if we’re lucky, in the sunshine, beer at hand and maybe a scorecard and are offered a lesson in the presence (and often the absence) of the extraordinary in the ordinary. Baseball is a sport where it’s okay for the spectator’s attention to wander just a bit, because it lends itself to being known as much as to being seen. I showed up two innings late for a Cubs game once (not my fault, I swear), and with a scorecard and the little bit of information posted on the scoreboard each time a player comes to bat, I was able to reconstruct everything I had missed.

All of this is to say that what makes baseball work is the tension between the nature of the game on a pitch-by-pitch level as a fluke generator and the drive of the nine-inning game and the 162-game season as statistical levelers. Baseball games aren’t won by the most spectacular play, they’re won by the team that scores more runs before recording 27 outs. Slumps and streaks happen, and they end. Teams get hot and they cool down. Any team can win any individual game (even the best pitchers and most reliable hitters have bad days), but building a record across a full season tells you which teams really are better and worse.

And this brings us to the other side of the Nationals’ hard-fought, unlikely championship. It’s a great story, but it’s also kind of what’s wrong with baseball. Not the Nats themselves, that is, but the way that we look at the playoffs as the only thing that matters, the one story that wins in the end. At the beginning of the year, the Nationals were objectively terrible. They got better. They played in a World Series in which they were lucky, apparently, to not have home field advantage. It’s a great story. It’s one we’re not likely to see again.

And for all that, I’m a bit nostalgic for the time when the playoffs in Major League Baseball were the two best teams in each league playing for the right to advance to a World Series that was treated, rightly, as something of a curiosity. A fine trophy and a good party, but something of a fluke. Not that there’s anything wrong with a good fluke.

Humor and the Homicidal Octopus