Way back in April of 2016, for Issue 78, I wrote about a problem I had with Breaking Bad. Creator Vince Gilligan hoped to make a show that explored the audience’s relationship with a sympathetic character who becomes something more like an antihero and, later on, a villain. In Gilligan’s words, he wanted protagonist Walter White to evolve from Mr. Chips to Scarface. Along the way, the show would challenge and question the audience’s sympathies. In my column, I argued that the show fails to achieve this because, over the course of its final seasons, it ultimately gives into its admiration for Walt and grants him a redemption arc with a clear set of villains to overcome. Walt no longer occupies a conflicted position by the show’s conclusion, which encourages the audience to cheer him on without guilt.

If Breaking Bad fails to deliver on its initial thematic and narrative promises with respect to the idea of the antihero, though, it certainly isn’t unique. The recent release of the long-awaited conclusion of Deadwood reminds viewers of another series in those ranks.

In that show, Al Swearengen, proprietor of the Gem Saloon (a bar and brothel), appears initially as cutthroat and morally repugnant. He works to protect his position at the top of the town’s business and social hierarchies in all of the ways expected of a mob boss, even attempting (but failing) to order the murder of a child in the show’s first season. He’s portrayed as intelligent and darkly humorous, however, which is supposed to intrigue and entertain audiences enough that they’ll want to learn more. 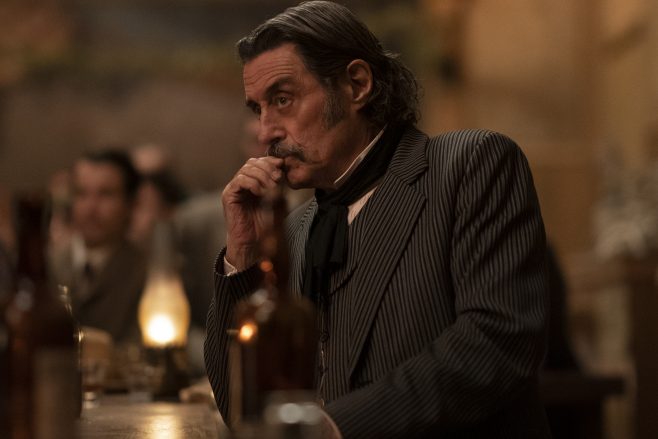 How should the others in town regard him? How should the audience? Who can trust him and who can’t? For the first half of the series, these appear to be questions of central concern as it gradually uncovers his personal history and explores his role in the town. As it winds its way toward its conclusion, however, Deadwood reorients itself, turning Swearengen into a much more admirable and heroic character – someone with obvious flaws, but who deserves the audience’s reverence.

There is something to be said for character development, personal growth, all of that. Perhaps Deadwood’s narrative ambitions always involved depicting Swearengen’s evolution. There are more compelling and less compelling ways of pursuing a story like this, though. What Deadwood and Breaking Bad have in common is the way in which they achieve the transformation from villain to flawed hero: they place a readily identifiable and far worse villain in the path of their protagonists, shifting all possible audience animosity or negative attention away from established characters and onto the new target. In the process, they simplify their stories, draining them of potential complexity.

Breaking Bad does this by introducing, among other characters, a group of neo-Nazis (including a child murderer) for Walt to defeat. Deadwood brings George Hearst into the fold to fill the role of recognizable antagonist. Hearst is introduced as an extraordinarily wealthy businessman with some personal quirks, but by the end of season 3 he has far surpassed Swearengen – and everyone else – in ruthlessness and avarice. He oversees a streak of violence and intimidation that threatens the town’s existence. He does all of this in pursuit of business success and the accumulation of vast personal wealth, displaying no regard for others. Swearengen, by contrast, displays gradually more appreciation for those around him, seeing his own success as less motivating than it once was.

Swearengen, by contrast, displays gradually more appreciation for those around him, seeing his own success as less motivating than it once was.

The show’s recent finale, Deadwood: The Movie, ties a bow on all of this in some awkward ways. Hearst returns to town after a 10-year absence and immediately resumes his miserable enterprise, leaving beloved characters dead in his wake. The movie’s story eventually becomes a kind of showdown between the town and Hearst, culminating in the closest thing the show can offer to a victory over its antagonist: Hearst gets outbid at an auction for some land he wants to buy and, through some other plot machinations, ends up spending a night in jail. This is the last the audience sees of Hearst, and it’s meant to feel like he has finally gotten his comeuppance.

This is a tough sell. Hearst is a millionaire and, by this point, a sitting US Senator. Whatever occurs to him in the series finale is maybe a small speed bump on his road to even greater success, and it only offers emotional catharsis if the audience ignores the story’s context entirely. Swearengen, meanwhile, now appears in a kind of avuncular role, expressing remorse about his past deeds, helping settle town affairs, and working to ensure the ones he cares about have secure futures. He is ill, perhaps terminally, and much of the movie acts as a celebration of Swearengen.

There’s a great deal about the settings and casts of Breaking Bad and Deadwood that differ. But the effect of their storytelling decisions on the shows’ narratives is similar. Both of these series become less dramatically interesting over time. The nuance they attempted in earlier seasons is lost and plotlines become more straightforward. In Deadwood’s case, a weird balancing act takes place. The web of relationships at the core of show expands as new characters arrive in town, but the story’s dramatic priority shifts to whatever is going on with Hearst. The character-driven material that was once the show’s backbone starts to feel tangential to Hearst’s rise as regional supervillain. And the sense of a story attempting to depict an entire community recedes as the heroes and villains take their anticipated positions on stage. Defeating Hearst (regardless of its obvious improbability) becomes paramount, as does the elevation of Swearengen to something like the town’s patron saint.

From the show’s perspective, this development works. It portrays a town now appreciative of Swearengen’s efforts despite his past, and the finale grants him a somber, sentimental sendoff. Much like Breaking Bad, Deadwood wants viewers to leave gratified, vindicated and with a sense of closure. This is understandable, but ultimately tough to reconcile with the messier stories that they first established.

Razor Blades or Fancy Pants: The Story of The Real Peaky Blinders