When I was young I had a computer. Nowadays, that doesn’t mean much, but in the late ’70s/early ’80s it was unusual. On top of that, it wasn’t a Tandy, Amiga or Commodore, it was an early PC. I remember my dad bringing me a disk of games someone at work had found. None of these games were official – they were all hacks and look-a-likes. Instead of Dig-Dug, I had Digger. When I was a bit older, I started buying games. I had a lot that I loved, including Wizardry, Ultima and Wing Commander. The latter is the game I’d like to talk about.

Double Damage games, founded by folks who made Torchlight as well as Diablo (and more), released a game called Rebel Galaxy Outlaw. This is the second title from Double Damage, and is the prequel to their first game – Rebel Galaxy, which is similar to Freelancer except in 2D space. Rebel Galaxy Outlaw, on the other hand, is about as close as you can get to Wing Commander or Freelancer without a DOSBox or time machine. 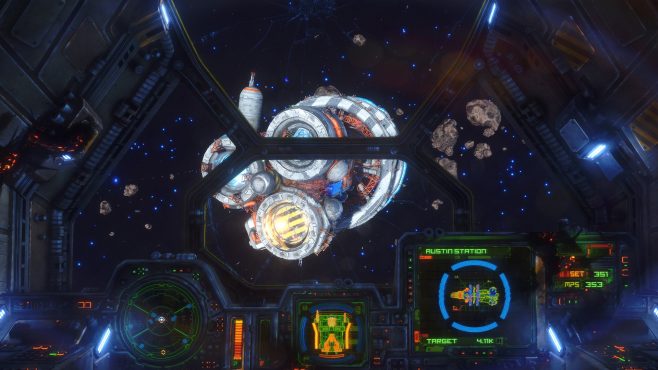 Every other game released now is a sandbox or sim of some manner, but back then it was unheard of. Sure, you had some outliers like the amazingly ahead of its time Darklands (released the year before), but Wing Commander: Privateer captured many imaginations, with good reason. Not only could you be a merc or a pirate, you could buy a freighter and trade your way to wealth. Or just go out and explore the mysteries of the universe.

Outlaw is, as someone watching my stream said, “Wing Commander in 60 FPS.” This statement is strikingly accurate. Remembering a series like Wing Commander, you see it through a rose-colored lens. That said, Rebel Galaxy Outlaw is like playing the Wing Commander I remember from being a kid, if you added a badass storyline featuring Heavy Metal style animated sequences.

In Outlaw you play as Juno, a total badass lady mercenary who has crashed her ship and is hustling to stay afloat. After paying back a few favors for a, uh-hm, “new to you” ship and a few bucks, you are set loose in the game and left, mostly, to your own devices.

Each port has a host of things to do. You can visit the bar and play games like 8 Ball or plug coins into slot machines for a chance to hit the jackpot. While you’re there you can bribe the bartender for some juicy gossip. Maybe there’s a shady stranger in the corner of the bar with an opportunity you “just won’t want to let pass you by!” Or you can spend some time upgrading and modifying your ship. Outlaw has a very robust ship painter. 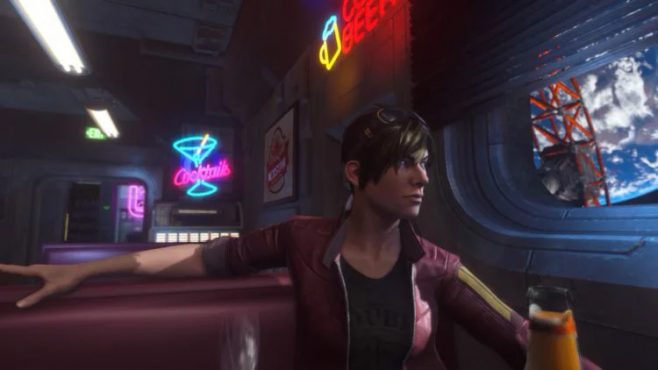 There are various other businesses you can visit depending on your location, but the main draw for many will be the Mission Board. Here you can pick up missions for tasks like patrols and deliveries as well as outright conflicts. Depending on your actions, you can change how factions feel about you. If you’re friendly with the pirates, maybe the next time you get ambushed, they’ll recognize you and leave you alone. Of course if that’s the case, you shouldn’t count on the law to help you if they find you in trouble.

Once in flight, the game really shines. From the radio stations to the little bits of wear and tear on the panels in your cockpit, Outlaw oozes personality and charm. The various merchants and hostiles in the area have voice lines and taunts to throw at you when things get hot. Even if things get a bit too hot for you, you can ask the people you’re fighting to leave you alone and sometimes they will. You never know ’til you try!

There is so much going on in this game, and I enjoy it so much, that I feel I could write thousands of words about it and still not be done. I haven’t touched the mining, salvaging, trading, exploring and many others that I’m forgetting. But, that’s not practical, so I’d like to leave you with this. When you’re in a fight, lasers cracking into your shields while a jangly blues tune floats through your cockpit, it’s easy to lose yourself in the moment in this game. Not only is it reminiscent of the games of my past, it’s a very good game on top of that.

I’ll admit, there are points when playing Rebel Galaxy Outlaw that I lose track of, not where I am, but when I am. Memory can give the illusion of gaping the abyss of time. Almost like deja vu, I feel I’ve been here before – in a place before the rigors of life were such a burden. We can never go home, and we certainly can’t live in that place, but it’s wonderful when you can glimpse it again, even if only for a time.