I’ve been listening to Mortal Podkast, a new podcast by comedy writer, Ben Mekler, where he invites on various writers and comedians (many of whom having only a passing familiarity with the series) and recounts the astoundingly complex and lengthy minutiae of Mortal Kombat lore. Each episode features a new guest and focuses on a different character. In the midst of an episode detailing Shang Tsung’s behind-the-music-esque life story with Rick and Morty writer Catie Dulaney, she stops him to point out: “It’s amazing to me that there are people who say: ‘this fighting game that I’m doing, I need to know more, I need to know where these people came from.’”

Dulaney’s confusion is reasonable. On its surface, Mortal Podkast is a frivolously quixotic project. Mekler spends hours upon hours listing out strange, contradictory marginalia, much of which never technically appears in the core text of any of the games. Details of the alien civilization that produced a DLC character in a spinoff game, for example. Or a treatise on the broader organizational goals of the clan to which the gray ninja, as opposed to the blue ninja, belongs. From characters’ parents, to their religion, family upbringing and military records, Mekler gives every last labyrinthine layer of Mortal Kombat lore far, far more than its due. 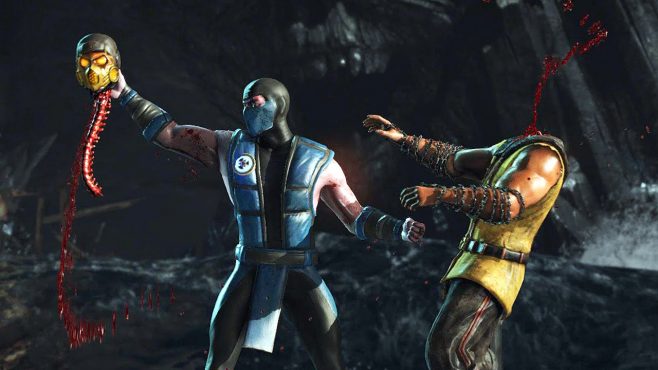 But the podcast, quite unlike the reams of primary source it is compiled from, is very entertaining. Owing to Mekler’s earnest and infectious excitement about the series, the episode guest and audience alike can’t help but get swept up in the loopy tale being spun. In embarking on this project, Mekler is functioning as storyteller, secondary to the stripped-down, functional narrative delivered by the game (repeatedly punch person to save Earth), but still an important part of the wider narrative fabric and constructed world that the decades-spanning series carries with it.

Games like Mortal Kombat, Dark Souls, Halo and Destiny, genre films like Star Wars and Aliens, book series like Dune and Harry Potter, TV shows like Westworld, can all be classified by the dual layers of their storytelling, and the mechanism by which creators and fans work together to establish a wider mythology, one that often never makes it to the final pages of the film script or novel. These universes are constructed in tandem with audiences, and could never exist as fleshed out as they are without dedicated storytellers like Mekler willing to hunt through comic books, web series, dime-store novelizations and web forums to piece together a semi-coherent picture of “where these people came from.”

Another favorite secondary storyteller of mine is VaatiVidya, who runs a YouTube channel dedicated to the inscrutable lore of Dark Souls games. He does this by hunting through item descriptions, the Rosetta stone-esque containers of the game world’s history. This makes him a historian as much as a storyteller, one who studies carvings on the hilt of a rusted dagger, or examines the glyphs barely visible on the surface of a crumbling giant’s skull. With a measured, scholarly voice, he evokes these lore-hunting fantasies as he spells out the biblical tragedies that texture the world of the Souls games and lend them such an unmistakably somber tone. I would not be as much an admirer of the series as I am, where it not for streamers like VaatiVidya, who give it shape and keep it alive in my mind long after I’ve beaten the final boss of my dozenth playthrough. 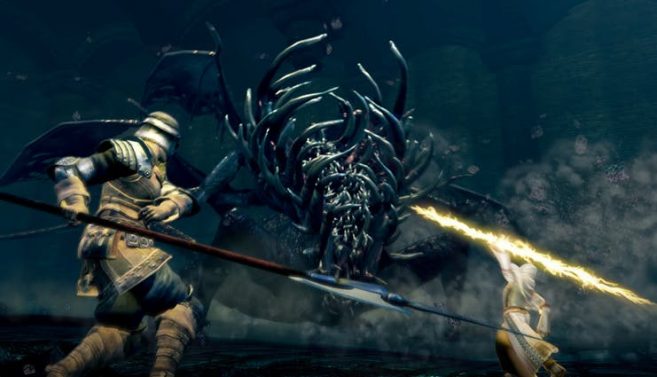 Mortal Podkast takes a less serious tack, choosing entertainment over information. It’s largely impossible to keep up with Mortal Kombat’s timelines, kamidogu daggers, elder gods, deaths and rebirths notwithstanding. As patiently as Mekler delivers the information, it only takes a few minutes after the podcast has ended for my brain to neatly recycle all of that useless information, leaving behind some hazy ninja-themed memory. The one aspect of the podcast that actually sticks with me is the back and forth between an earnest nerd and his incredulous guests; it’s the joy and hilarity embedded in Mekler’s narration as he maps out the millennia-stretching civilizational steps that lead to a guy doing a nasty uppercut.

In one episode, Mekler’s wife, Kirby Mekler, asks why characters don’t simply die after all the punishment endured from a single round of fighting. He responds that they do, but only at narratively opportune moments. Later she asks why no one simply whips out a gun and shoots their opponent. Mekler points out that guns are introduced a few sequels in, but prove to be fairly useless against things like dragon magic. These push and pull exchanges, where a normal person pokes against the edifice of an unlikely canon, are what make Mortal Podkast so memorable. Unlike VaatiVidya and his ilk, who deliver arcane lore to an already invested audience, Mekler has to make his case to the admirably patient, but understandably cynical guests he brings on. He is often forced to defend the impossible ninety-degree turns of his subject material, and make sense out of storylines which were often thought up based on fan theories on previous games.

It’s that back and forth, however, that desire to reason out the otherwise hyperbolic and unrestrained that drives not only lore storytellers, but game critics as well. In Mekler’s well-researched delivery, in his earnest handling of topics that are, on their face, stupid and meaningless, I see a reflection of myself and my own incomprehensible urge to weave broader stories from games. Videogames, as huge and profitable as they have become, are still made up of niche, hidden worlds for the most part. People generally know that a game exists where you can punch and kick each other in a quasi 1990s imported kung-fu setting. The vast majority of us do not know how much mythology and world-building has been grafted onto the series over time. Opening that up to others is Mortal Podkast’s, earnest and joyful conceit. There’s an undeniable pleasure in being able to share, as Mekler does, what was once hidden, and in sharing, come to a closer understanding and a better appreciation of the subject at hand.

Ferris Wheels and a Murder Castle: The Chicago World’s Fair and H.H. Holmes