Being queer can get lonely and isolating. As a small percentage of the population that’s treated as taboo or deviant by the majority, we’re in a vulnerable position. That’s why it’s extremely important to hook up with a support system, which can be an in-person LGBTQ support group, a circle of queer friends, or even a network of online queer peeps with a common interest. The latter is often what ends up happening, especially for queer people who live in rural areas. I know that I wouldn’t be as well-adjusted as I am without my circle of Twitter gays cheering me on and passing on their queer wisdom. But support structures come in many forms, and you need look no further than Final Fantasy XIV for an example. Final Fantasy XIV, while an incredible MMORPG, is also home to many tight-knit queer companies that use the game for both its gameplay value and the way it connects people together. Connected games like Final Fantasy XIV have the power to build these support networks organically through play.

The appealing thing about games is the fact that so many queer people are into them. We can use them to escape from a world that hates us, as well as envision our own fantasies in the increasingly queer selection of titles that come out nowadays. But Final Fantasy XIV and other MMOs of its ilk has the advantage of connecting a large swath of people at once within a game. It’s very similar to how communities on social media form organically, with similar interests and demographics finding each other and forming symbiotic networks.

MMOs are special in this regard, though. Usually when you first join the game, you already have someone you want to play with. They, in turn, are usually already playing with a group of their own people that share an interest, and knowing your friend will almost always get you an invite to their group. In Final Fantasy XIV’s case, players can form Free Companies, groupings of players that play under the same banner and have their own channel of in-game chat. Before you know it, you’ve got an instant network, and for queer people, that’s invaluable. It’s also easy and natural for queer groups to coalesce since there’s so many resources available online for discovering pockets of queer to immerse yourself in.

But there’s more to it with Final Fantasy XIV. The JRPG aesthetic has always attracted a queer following due to the heavy camp factor, but more important is the form’s dedication to sincerity in its writing. In a world where gender roles and heteronormative behaviors rein in people’s authentic selves, it’s downright stifling to live in such a realm while queer. JRPGs in general, and Final Fantasy XIV in particular, offers an escape from those shackles thanks to characters who are written with sincerity and good intentions. Most everyone you ally with in the game is good-natured and only wants to do the right thing, and outside of the main conflicts of the story, they seem to be unshackled from the prejudices of the real world. They’re nakedly open and honest about what they’re feeling, which is part and parcel for an MMO. The fact that people are tempted to treat NPCs as quest containers means that their characterization must be up front and honest, leading to a more endearing play experience.

The reason queer people are attracted to this kind of characterization also mirrors what we’re attracted to in the play experience: the spirit of cooperation. In the real world, queer peeps are faced with a populous who would rather we didn’t exist, so cooperation with each other is key to mere survival. That carries over to the virtual world of Final Fantasy XIV’s Eorzea, too. It’s a vast game world, and tackling it without any help is next to impossible. Parallel to the real world for queer people, falling into similar roles in the virtual one helps build a sense of camaraderie and gives you a sense that you’re actually affecting this world, even if you can’t the real one. 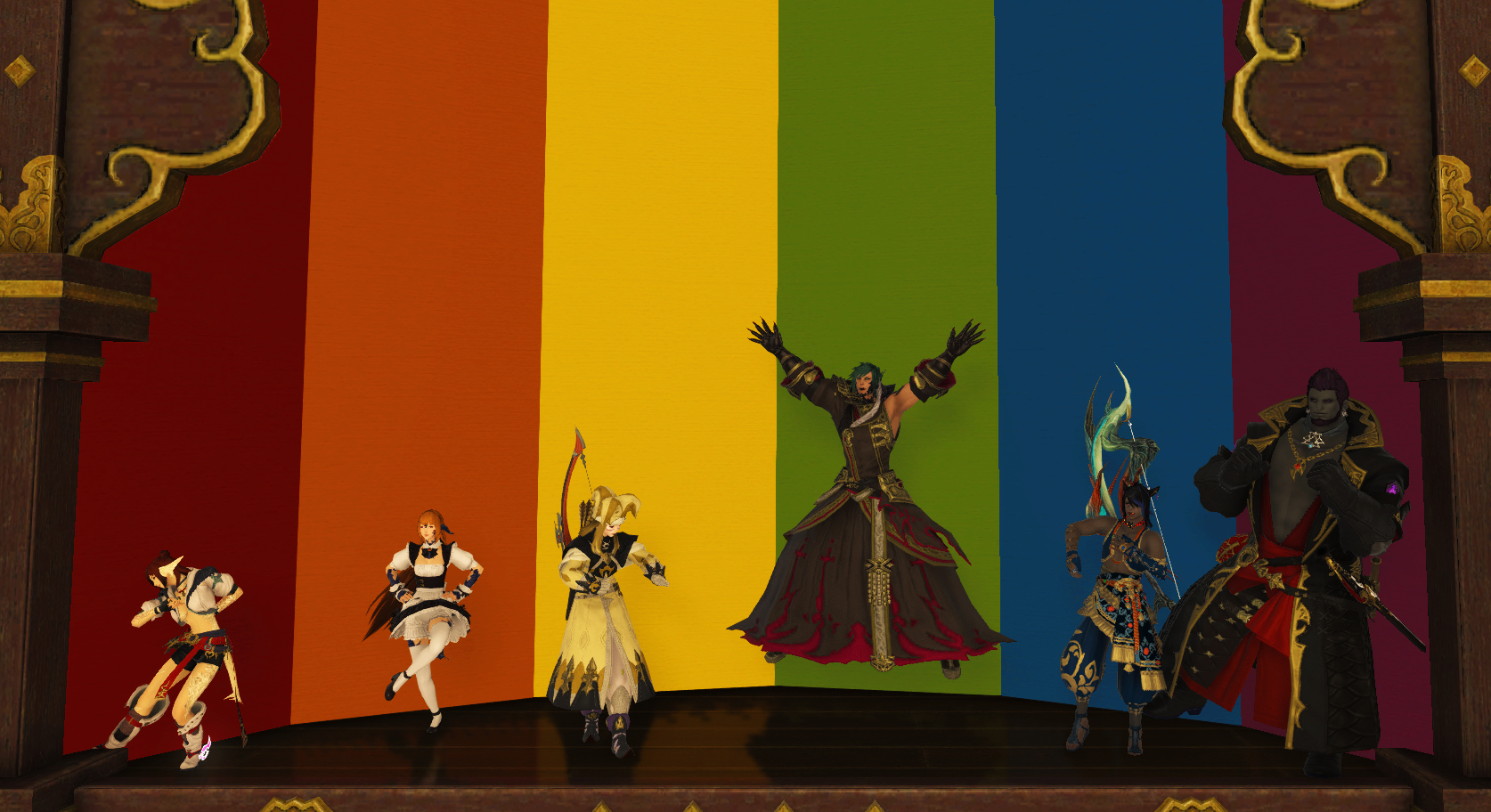 Final Fantasy XIV provides networking with a dual purpose for queer peeps by both giving gameplay reasons for achieving your goals of cooperation while connecting you to other like-minded individuals who can help you with real-world difficulties too. In the queer community, sharing knowledge and leaning on each other is how we’ve survived in a world that hates us. It’s only natural that we’d flock to a game that lets us mirror this same sense of cooperation while forming very real bonds that can only increase our odds of surviving this hellscape we find ourselves in.