This feature is a reprint from Unwinnable Monthly #117. If you like what you see, grab the magazine for less than ten dollars, or subscribe and get all future magazines for half price.

The most remarkable thing about the PlayStation Classic is how literally everyone agrees it was a weak cash-in attempt that failed to cash in. This is evidenced by the fact that its hit $29 (down from $99 last fall) at some retailers, also signaling that it is, in fact, possible to get gaming’s internet hive mind to achieve consensus on something. While it’s a shame the retro console flopped despite the depth of the original PlayStation’s library, that also means now is the perfect time to grab one cheap and revisit the endearing and sharply prescient Oddworld: Abe’s Oddysee.

Originally released in 1997 as the first part of a five-part series, the game was well-received by critics and consumers alike, selling over one million copies and earning enough interest for a modern remaster titled Oddworld: New ‘N’ Tasty in 2014. However, as a 2D side-scroller hitting store shelves at a time when 3D looked like the only way forward, it was treated like a niche title and its sharp critique of capitalist excess and environmental degradation was largely overlooked. However, with direct sequel Oddworld: Soulstorm due out in 2020, it feels fitting today to revisit what the game was trying to say back then, while looking forward to where the story might go next.

Oddworld: Abe’s Odyssey tells the story of a Mudokon (a human-esque alien race) named Abe, who works for a meat processing company called RuptureFarms. When he discovers a new product they’re working on is made from Mudokons like himself, he resolves to escape the factory while freeing as many coworkers as possible. What plays out next is a HUD-less survivalist puzzle-solver similar to 16-bit classics Out of this World and Blackthorne (which had a similar mechanic of liberating your compatriots). 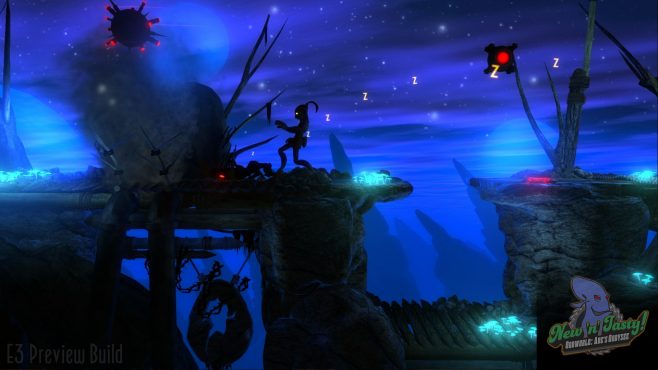 Releasing a two-dimensional platformer in the wake of Super Mario 64 was a bold move. The oversaturation of side-scrollers during the 16-bit era was still fresh in people’s memory, and it seemed like the world was moving on. An affable blue-collar alien with stitches through his mouth wasn’t exactly the type of protagonist mainstream audiences were used to either. It was difficult to make heads or tails out of the game on its surface, and unfortunately, most journalists didn’t make much effort to try.

Making socio-economic issues core to the game’s narrative, on top of sticking with what was perceived as an outmoded genre, with a main character that didn’t obviously ooze charisma, was tripling down on creative risk-taking in a way that was rare at the time. Critics mostly missed how remarkable this was too, choosing to focus on the game’s mechanics without digging deep into its underlying message (though to their credit, IGN praised its puzzles and level design as forward-thinking).

This isn’t an attempt to drag those publications more than 20 years after these reviews were published. Rather, revisiting the critical reception of Oddworld: Abe’s Oddysee helps illustrate both how far ahead of its time it was in 1997 and how the game’s themes were less at the forefront of public attention than they are today. While the deleterious effects of overconsumption and self-interest were very much in the public discourse, the volume of those conversations certainly feels louder and the tone more urgent today.

In some ways, it would seem that current headlines have finally caught up with series co-creator Lorne Lanning’s vision. In a recent interview with Newsweek, Lanning explains how working for a large defense contractor in the 1980s motivated him to create art that railed against environmental destruction, militarism and self-interest. Given that Oddworld: Soulstorm is intended to be a direct continuation of the story that started with Abe’s Odyssey, where will that story go next, given modern hardware and a player base that’s more open to issue-oriented game narratives?

That same interview may have offered some insights, as Lanning claims the series isn’t inherently politically driven. Taken at face value, that might sound like a PR-controlled statement to avoid misinterpretations around what “politics” are, keenly aware of the development costs the game will need to recoup. He further explains:

“How do we create a character that you could see yourself in his shoes, and it’s not political? They’re finding out that their life was scheduled to be short, unfairly, for the profit and greed of someone else. Who can we identify with, if someone is just trying to stay alive, but they haven’t done anything wrong?”

Even if the story doesn’t advocate for the advancement of any specific policy agenda, it’s difficult to parse its ideas from politics entirely. But it seems his point is the story isn’t about politics specifically, so much as how one chooses to cope with the consequences of unjust social, political and economic systems and decision-making they’re mostly powerless to change. When Abe realizes he and his friends are in danger, he takes action as a matter of survival, not making a statement. He’s just trying to get by.

How do those of us living in powerful Western democracies relate to his character, then? We do have some degree of influence over political outcomes through electoral politics and conscious consumerism, though the former has limitations and the latter is in many ways an oxymoron. What does it say about me then if riding my bike instead of driving my car, using a reusable coffee cup and maybe calling my elected officials are the most radical things I do in a day, just to do my part?

Those aren’t questions Mario ever prompted me to ask, and I’m not sure I can totally relate to Abe; maybe I haven’t done anything wrong, but I’m also not saving the world by myself. Playing a videogame on a novelty retro console isn’t going to get me closer to any answers either, but if Oddworld: Soulstorm can continue to provoke those thoughts, then maybe that’s enough to ask from a game whose time has arrived.

Attack of the Earthlings Bakes Humor Into Its Freakish DNA