E-soterica spotlights the indie darlings Khee Hoon Chan and Alyse Stanley just can’t stand to see players miss. Titles that buck convention, brave uncommon subjects, or whose strangeness begs players to stop and gawk. Join us as we scour the corners of the internet to share what treasure we find.

There’s always that one fellow whose entire shtick is about being unerringly hilarious. You know that type: the aspiring comedian who’s every bit as charismatic as they are a tad aggravating in large doses. Their jokes are just non-stop cavalcades of quirky pop culture references and rapid-fire punchlines, repeated constantly until someone grunted a note of recognition or unwittingly broke into a grin. And when uproarious laughter follows, a small smile would slowly spread across their mug. This very moment – one of utter self-satisfaction – probably marks the start of their stand-up comedy career.

It’s hard not to think of Attack of the Earthlings, a tactical turn-based game by Team Junkfish, as that friend: a thoroughly hilarious title that’s more preoccupied with making you giggle rather than breaking the mold. Take for instance its mechanical resemblance to XCOM; more than a mere coincidence or homage, it’s a deliberate subversion of the alien invasion trope the sci-fi series is famous for. Comical and feeble depictions of the human antagonists compound the game’s brand of humor, in contrast to XCOM’s brawny space marines = which set the stage for even more absurd scenarios. 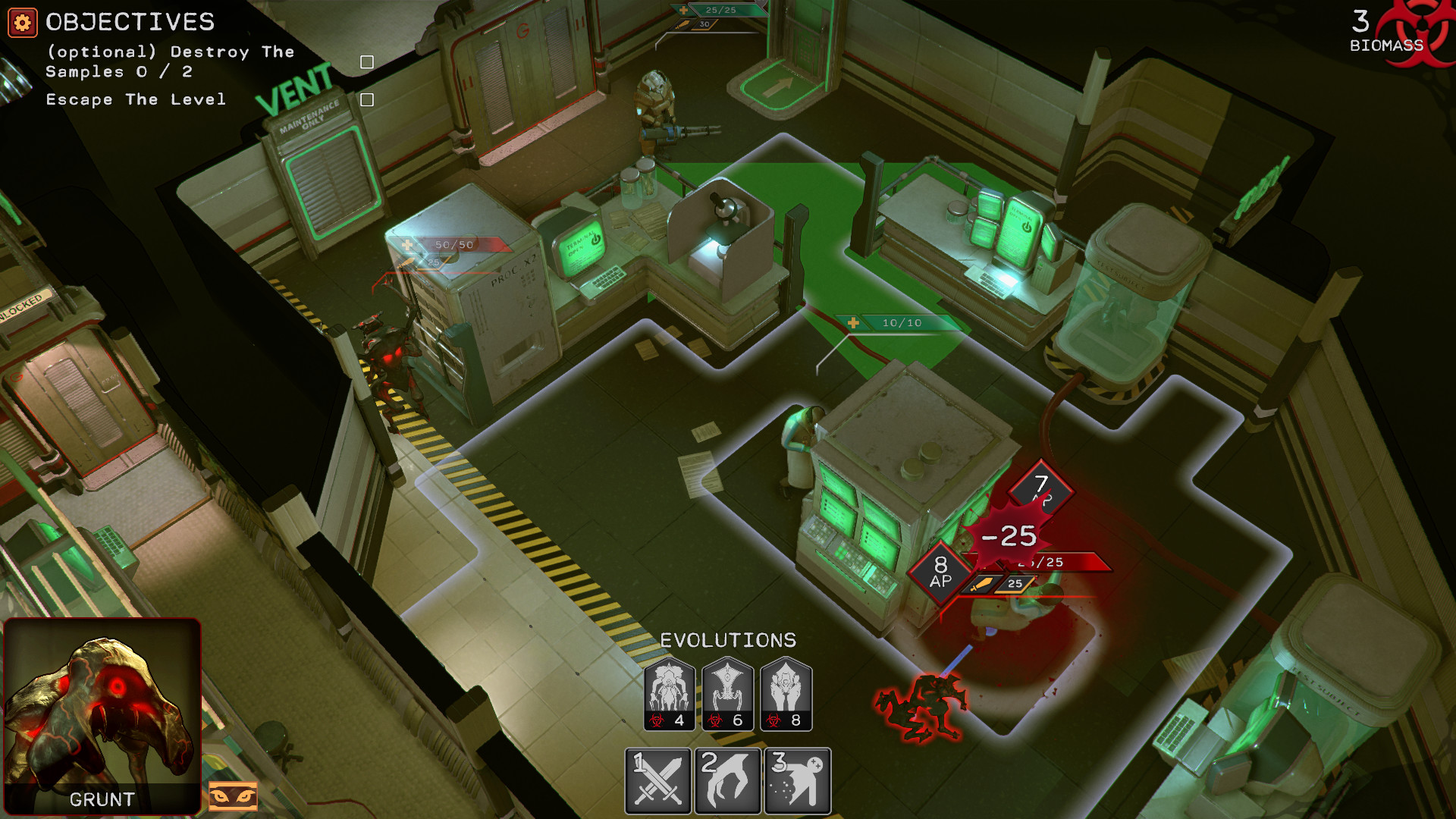 So instead of embarking on an interplanetary rampage – and as the matriarch of a race of extraterrestrials, too – you’re defending your home against an invasion by a mining corporation, headed by amoral human executives who hoard profits above all else, and get inexplicably thrilled by discussions of graphs and numbers. To drain the planet’s resources, the corporation had dispatched a crew of bumbling, incompetent workers to the mines, who are often painfully unaware of impending danger. In one playful scene, two of them are gleefully splashing green goo on each other, giggling as if they’re frolicking at the beach.

While these blundering humans hardly seem threatening, they are still dangerous in groups, due to the hired guns that usually patrol the vicinity. The guns brandied around by these mercenaries are capable of dealing heavy damage, which means the stakes are just as high for you. And as the game progresses, more powerful variants of these enemies – soldiers with more hit points and who deal greater damage – are introduced. To chase them out of your planet, you’ll have to eviscerate them, then craft your very own alien army by consuming their corpses, regurgitating their remains and shaping them into new spawn. It’s like Play-Doh for aliens. As you progress, your spawnlings can also evolve into units that are basically the three RPG archetypes: the hulking tank, the stealthy rogue and the sharp-shooting archer. 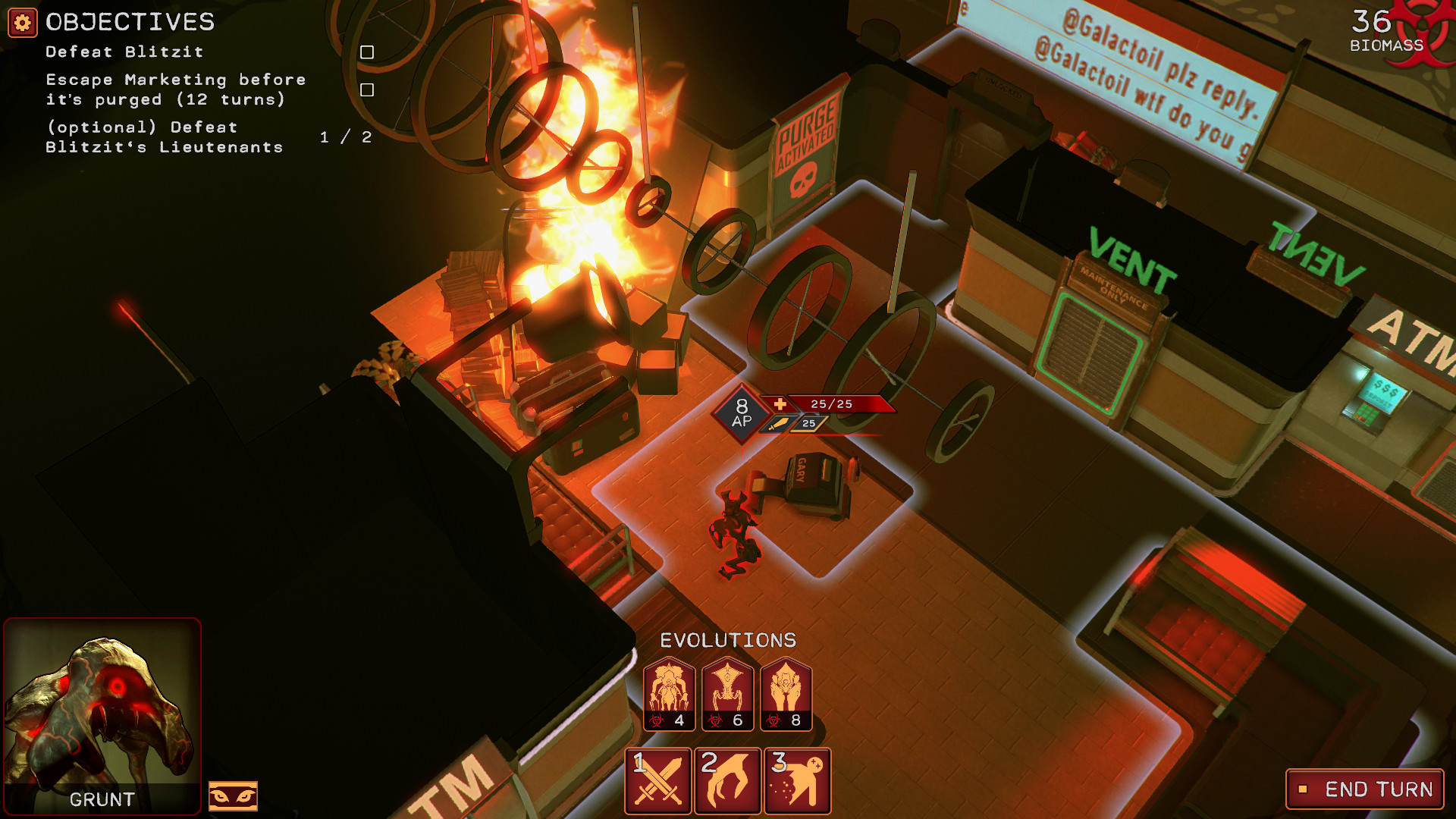 All these are usually par for the course for tactical turn-based games: you’ll decide the moves and attacks of your units, wait for your enemies to do the same, rinse and repeat. But for Attack of the Earthlings, these systems are merely a means to an end; the game just wants to be great comedy, and is more heavily scripted than its peers. It’s essentially sketch comedy set in outer space, with each chapter comprising of vignettes about corporate greed and the perils of being annihilated by aliens. While many titles wrap their plots and jokes around the game, rather than let these influence or dictate its game’s design, it’s the humor in Attack of the Earthlings that sets its puzzles’ direction. This means that their jokes land harder and also introduces variety to the game’s challenges.

One level takes place in the company’s airline lounge, where you’ll have to prevent high-ranking executives from escaping the planet via the nearest shuttle. As new executives scramble towards the escape pods from various entrances, you’ll need to consider a more effective tactic. Instead of gathering your troops to an area, pitting them against a small cluster of enemies and then moving on to the next place – a routine you’ll gradually grow accustomed to in the game’s initial stages – a more effective strategy is to disperse your alien troops across the level, which helps you get ahead of more fleeing executives.

This emphasis on humor, however, may have left several parts feeling half-baked, with pacing being one of the game’s biggest flaws. Since you’ll have to wait for every enemy on screen to complete their turn, this can be enormously frustrating when there are more than a dozen dudes to cycle through. At times, the game feels even tedious to plow through; the one level where you’ll have to traverse through a heavily guarded map stealthily to free the matriarch from her cage feels like a chore occasionally. Nonetheless, the relentless commitment of Attack of the Earthlings to telling a darn good joke works exceptionally well. Humor courses through the game’s DNA after all, even if it means having to sacrifice or overlook some elements of the genre to elevate its comedy. All Attack of the Earthlings wants to be is a wise-cracking asshole, and it will just keep tossing punchlines after punchlines if that means you’ll continue to laugh your belly raw.

Attack of the Earthlings, Team Junkfish

Abe’s Oddysee, Ahead of Its Time