Queer people feel an affinity for transformation. The appeal for trans folks is obvious, but even gay peeps are attracted to the idea of becoming something more like their own self-image. It’s because of the barriers we face that that the idea of a more ideal self that’s not only able to overcome them, but thrive beyond our wildest imaginations, is incredibly alluring. The fascinating thing is that the concept doesn’t always manifest in realistic ways, often manifesting in fantastical permutations, and integrating into sexual desire. That’s why many of us feel a kinship to anthropomorphic animal bodies, and retro games gave us an outlet to explore that aspect of ourselves.

This may sound familiar to you if you’ve been on the internet for a decent amount of time as the basis for furry culture, which, as someone who doesn’t identify as a furry, I can’t speak authoritatively on. But queer peeps can see the appeal of kinship in their own way. As a teen, I was closeted and miserable, with an idealized version of myself in my mind. I was bald, muscular, dependable, independent and a dad. Gay acceptance would come later, as I wasn’t ready for that, but my idealized self soon became part of my sexuality and I became attracted to that type of person. I started to seek out avatars that could stand in for my idealized self, a practice that lent itself well to character creators. But I also saw myself in altered bodies like animalized humanoids because I so badly wanted to transform into a better version of myself.

Altered Beast is the obvious example of this, but that didn’t quite hit the mark for the kind of transformation I was thinking of. Except for the weredragon, the beast forms were too much like actual animals that walked upright. The humanity of these bodies was secondary, and as such, felt removed from the proceedings. What I latched onto was fantastical bodies that still looked humanoid but enmeshed with the characteristics of an animal. That way, it could still feel aspirational in a way that Altered Beast’s forms weren’t – no, you can’t actually become either kind of body in real life, but for the sake of your desire for transformation, something that looks human but better is much easier to feel a connection to. 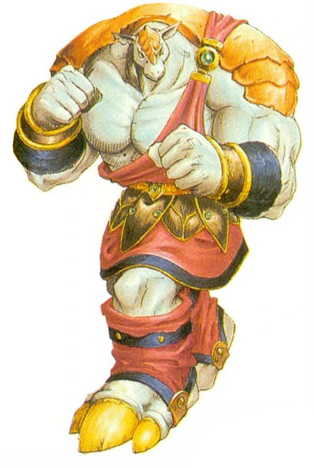 More impactful is the Breath of Fire series, which features a plethora of anthropomorphic species to play as and potentially admire. The one I most identified with was Rand from Breath of Fire II, a large member of an armadillo-like species who nevertheless sported giant human-like pecs underneath his purple toga. He fights using his whole body, mostly with his fists, but also could roll up into a ball when traveling to avoid random encounters. Most of his battle animations dovetail into poses that feel inspired by the most homoerotic Greek sculptures. His stout body basically checked all the boxes for a homoerotic presentation but had the bonus of being enhanced beyond human limits. It’s aspirational as well as erotic.

Also appealing is the concept of animals that transform into something more human-like to create something greater than either. While not exclusively a videogame property, the Teenage Mutant Ninja Turtles fit this mold perfectly. Transformed from mere turtles into anthropomorphic muscle-bound turtle men, they represented everything appealing about transformation, and queer ideas of transformation especially. It also didn’t hurt that they are portrayed as having muscular bods, a fact that the games only accentuate with their in-game sprites and models. The noble nature of their exploits also played into the idea of the ideal self, making them role models for queer kids even without them being explicitly queer. The multimedia omnipresence of them didn’t hurt, either.

When you’re queer in this world, you can’t help but wish for better for yourself. After all, the world keeps telling you that you’re not allowed to be everything you know you are. You begin to look to beings and bodies that seem more than human, and you start to idolize and sexualize them. This cocktail of heady feelings is completely normal for a queer kid to have growing up, and it’s why I feel like I have some understanding of what the furry community feels. The act of transformation is a powerful concept in queer circles, and if that power can come from beefy dudes beating up on baddies, all the better for us.

Does die Hoffnung Get Played at Emo Nights