Gay people are a punchline to a worryingly vast swath of people. Gay men are thought of as comically feminine, yet also oftentimes hyperbolically muscular at the same time – or at the very least, paired with a muscular fantasy man to satisfy his mincing ways. Often the “gay men are predators” angle is played up, portraying lisping bodybuilders as aggressively pursuing any man with a pulse, even if they’re straight. We’ve seen this trope time and again in games, and it’s honestly wearisome. But though these unfunny jokes are problematic to say the least, we can still reclaim them as icons for queerdom thanks to the power of camp.

The history of games is littered with homophobic portrayals of gay men, and they’re usually the butt of a joke. Take Mr. Gold and Mr. Silver from Capcom and Clover’s God Hand as an example. They’re muscular identical twin brothers who are very clearly coded as gay. They’re dressed in very showy, Vegas-inspired costumes complete with big feathers. And they’re aggressively flirty with Gene, the protagonist of the game. Their attacks include sliding along the ground butt first and bashing into Gene. After the battle, if you examine them, Gene makes a comment about how they lost their balls. They exist to be laughed at and humiliated, a proxy for all gay men.

Probably the most seemingly innocuous iteration of this trend is the muscular brothers Sampson and Adon from the Cho Aniki series of games. Again, they’re impossibly muscular men, this time wearing nothing but a thong. They’re bald, with a hole on top of their heads that flowers sometimes grow out of. Their exploits revolve around mystical protein and fighting an evil emperor whose name is a play on the word steroids. A lot of the more harmful tropes used for gay men are absent here, left instead with a hyper-masculine pastiche that revels in all things manly. The holes on top of their heads are meant to make them look like living penises, after all. 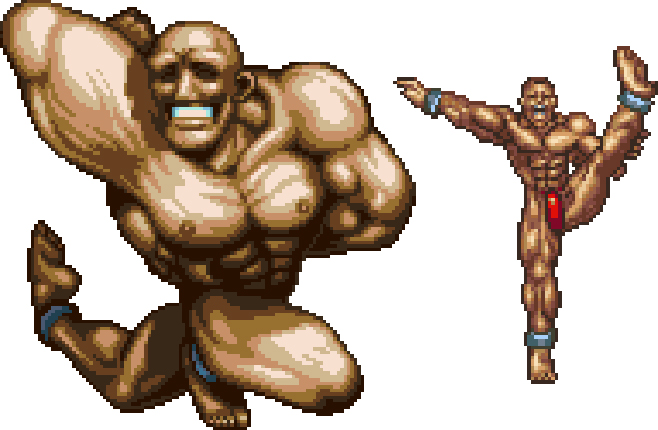 But Cho Aniki also utilizes surrealist humor in its visual presentation separate from its masculine tendencies, which can only lead one to assume that the gayness in Cho Aniki is meant to be treated as exactly as much of a joke as everything else in the game. By making everything weird, the developers make the hyper-masculine aspect of gayness weird, othering gay men in the process. The campiness of the game is not meant to be flattering to us, but rather view our very existence, indeed our desires, as a joke.

And yet the campiness inherent in these mockeries is what allows gay men to reclaim potentially problematic portrayals of ourselves. Camp represents our self-image as viewed with the limiters off. It’s what we would be like if the social contract didn’t inhibit us in any way. Is the fact that Cho Aniki portrays gayness as living embodiments of a phallus meant to other us? Absolutely. Would we own that image of ourselves if given the chance? Hell yes we would. Reclaiming something is meant to take the power harmful tropes have over us and claim it for ourselves. Sometimes it’s harder, like with Mr. Gold and Mr. Silver. There’s a lot of ugly, loaded tropes to get past. But when the joke is our mere existence, inhabiting that space and owning the other is incredibly empowering.

When the joke is our mere existence, inhabiting that space and owning the other is incredibly empowering.

The aspirational aspect of camp cannot be overstated. When we’re among our own people – in gay bars, at leather events, at bear parties – we can be that hyper-masculine caricature and have everyone who’s witnessing it be in on the schtick. It’s incredibly freeing to be so completely yourself, yet even louder, because we’re not allowed to be ourselves in public. Not entirely. We always have to tone it down so as not to make heteronormative folk uncomfortable with our existence, the very same sentiment that gave rise to the humor behind Cho Aniki. And yet the muscle brothers become aspirational for the very reasons that they are meant to skewer our existence: We’re gay, so we’re going to be as gay as we possibly can be, even if that means turning into phallus beings ourselves. Living as all of who we are and then some is impossibly rare, so living your truth completely uninhibited is incredibly powerful, even if the source of that aspiration was meant to ridicule.

There are no hard and fast rules for reclamation, and not all gay men will agree about the value of reclaiming harmful tropes, but it’s hard to argue with the notion of being as gay as these people think we are, even if it’s just for spite. But it’s more than that. It represents inhibition being stripped away and only left with the raw core of who we are signaling loud and clear that, yes, we’re here, we’re queer, and we’re not going anywhere.

Musk Comes From the Butt – The History of Perfume