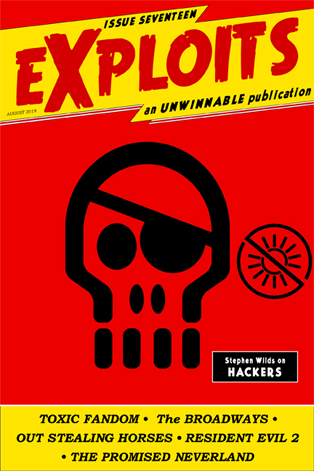 This is a reprint of a feature story from Issue #17 of Exploits, our collaborative cultural diary in magazine form. If you like what you see, buy it now for $2, or subscribe to never miss an issue (note: Exploits is always free for subscribers of Unwinnable Monthly).

The Phantom Phreak, King of Nynex.

In the days just after my obsession with Power Rangers, VR Troopers and Superhuman Samurai Syber-Squad, these were my new colorful heroes for a more grown-up world (same aesthetic). They showed me real causes, to fight against insurmountable odds and that, “we are samurai, the keyboard cowboys.”

Hackers taught me that Angelina Jolie was an actress to watch and I still want to be as (Zero) cool as Jonny Lee Miller wearing those shades. “Erotically, as it were.”

There is such a sex appeal presented with all of the wetness, tight clothing, Joey’s ass, Matthew Lillard’s pelvis shaking and the fact that Marc Anthony is here. Some of the scenes with Acid Burn lingered for days after I saw the film that first time.

There was a style to it that many like to mock, but it fueled my creativity. To me, it was a “wake-up call from the Nintendo generation.”

Hackers created an artistic palace. It is the world of the electron and the switch, but on the surface, most just see a distaste for hard copy. Hackers isn’t just about the Nirvana poster, a product of its day, or even a time capsule as many have said, but something outside of that moment. I grew up then, but this used the iconography and showed us what we wanted to see, a special world, made more interesting than actual hacking could be.

The movie uses color and flair – mixed with a thrilling soundtrack that still resonates with me – to create a visual identity comprised of bold hues, vibrant contrast, twisted wardrobes, makeup, poetic elegance, overlays and editing. The best examples are when the audience is shown inside the computers or more practically with the Cyberdelia scene. There is a range of visual playgrounds, but my favorite moment is more practical, showing their different icons when each character boots up before the big final scene.

Hackers embraced the daring fantasy of being the titular heroes in the faraway land of cyberspace. The movie did what it was supposed to perfectly, never intending to capture anything that was real, but rather show a modern adult fairy tale of righteous codemasters. It’s a story about outsiders finding family, love and standing up against all odds. It’s also quotable.