I refuse to bend to Bethesda. And until the games maker releases a massive update to The Elder Scrolls: Blades that somehow forces my hand, I am ready to rest on my digital laurels and declare victory.

I have completed all the quests. I have defeated the Sorcerer-King, bent on bringing hell to earth. I have the Founder’s Statue and the five stones. I vanquished Aranande in the battle pit after she killed my buddy Henrik Seven-Swords. My town of Astoria is leveled to the max. So is my Enchanter’s Tower and my Smithy. My character, Judge, is Level 50 (51 exists theoretically but since it takes 9999999 experience points to get there, I’m thinking the game would break if you ever reached it). I have full dragonplate armor and a dragonplate battleax and all I’ve left to do is run some jobs and go deeper into the abyss and open some chests for the sole remaining reason of assuaging my compulsion to temper and enchant everything to mythical status.

I have achieved just about everything in the “Early Access” version of Blades. And I didn’t pay Bethesda a single penny for the privilege.

Now, don’t get me wrong: I would’ve paid for this game. Had it been $9.99, I’d have picked it up without a second thought. But no, Bethesda decided Blades would be free to play with – and I don’t say this lightly – absolutely insane in-app purchases. You can buy gems with real cash to make things happen faster – chests open more quickly, construction jobs speed up, etc. etc. – but these gems can also be found in the game, and, I mean c’mon, you can also put the game down for a while and let stuff happen while you do other important things like play Snake vs. Block, Words with Friends or maybe take your kid to his tee-ball game.

Still, I wouldn’t begrudge anyone buying a few gems to help out. It does take way too long, for example, for those chests to open. My 10th-level Enchanter’s Tower took five days to renovate. I even considered buying a few gems myself – not really so much to make things easier, but to make things easier and also throw a little cake to Bethesda for making a game I have now spent many hours playing – and mostly enjoying – for free. Except I quickly noticed this, in the in-game Blades Store: 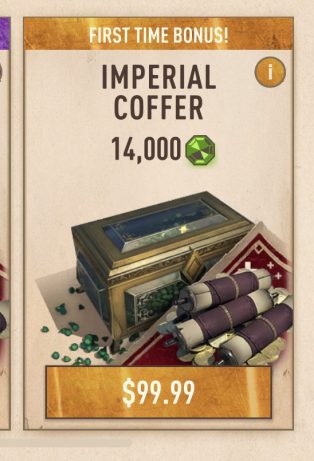 Ninety-nine ninety-nine! Yes, 14,000 gems is a ton. And if time is money, well – you shouldn’t be playing Blades anyway, but yeah, this wouldn’t hurt. But even putting aside the much-discussed moral issues with potentially luring the young and/or deranged into spending hundreds if not thousands on mobile games . . . no, wait, I’m not putting that aside. It’s gross. It’s not worth the entire game if it were priced traditionally. And now I  know I won’t pay a cent to help Bethesda join the fray. It’s a battle I’m likely to lose as a consumer in the end, but I won’t be a part of it.

Some of the problem lies with the perception. On Reddit, for example, I saw players bragging about how much they’d spent to get all these sick items (which will increasingly come in handy when Bethesda opens up PvP). More importantly, there were those who accused any successful player of having paid for it, and some playing in earnest who wrote that they sensed reaching Level 50 would be impossible without paying.

I set out to prove them wrong. And I did it.

Is my life any better for it? Of course not. It’s only a mobile game, after all, designed to pass the time on my commute. But I’m not $99.99 poorer – or any multiple thereof. Which means that money went instead to buying Jacob’s tee-ball uniform.

He’s a Mariner and made a fantastic defensive play the other day – while I stood behind him on the field with my glove, cheering him on. After he went to bed that night, sure, I played some Blades. But it cost me nothing, except maybe some much-needed sleep.