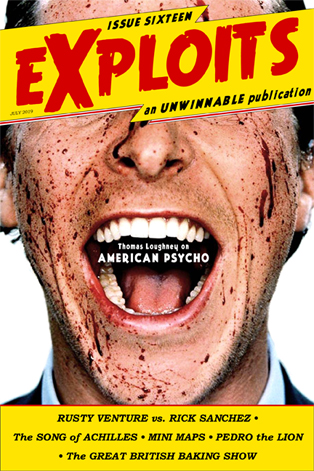 This is a reprint of the cover story from Issue #16 of Exploits, our collaborative cultural diary in magazine form. If you like what you see, buy it now for $2, or subscribe to never miss an issue (note: Exploits is always free for subscribers of Unwinnable Monthly).

The man pontificates. American Psycho’s Patrick Bateman has an opinion and he has decided that it must be heard. It is asinine, if passionate, and washes over us like thick mud. The camera is locked on him, following his motions and words, until he takes time to address us directly. The camera cuts and we see the audience of his projections: almost always a woman, always glancing away, always a quiet, mumbled response. Very little is spoken by these women, but they say so much – to both the viewer and Bateman. Their silence is communicative.

Director Mary Harron smartly yanks us away from Bret Easton Ellis’ tedious, imperceptive Bateman (a character Ellis based on himself), establishing the intentionality in his guests’ behavior. To participate as an attentive listener is not an act of passivity, but of cautious performance – Bateman is humored because keeping quiet is easier and safer, especially when the opening positions of these doom-tainted conversations have such low stakes. For these women, it’s Phil Collins and Whitney Houston, though anyone who has lived through one of these nights knows that the full spectrum of pop culture may be invoked. For me, it was Super Meat Boy, Sufjan Stephens, even just a bottle of Captain Morgan. These sort of interactions always start so simply.

People like Bateman like to fixate on something, drawing your attention away from their intent, lowering the stakes. “Christie, you’re not drinking your wine.” It is much harder to say “no” to an incredibly cold take on Whitney without feeling like the asshole, or being called one. This is how stakes are raised, how goalposts are shifted, how boundaries are edged towards and past. The discomfort is clear, it is simply ignored. Outright refusal is danger. It is the enemy, because another sits before us.

Bateman’s greatest misconception is that he believes no one perceives him for who he is, but this is categorically untrue. As he waxes mispoetic, directing his victims, they express fear and worry. When he approaches a woman on an empty nighttime street and says, “Hello,” her eyes hold the expressionless silence of fear. I must show this man nothing. Bateman’s victims see him for who he is; it is he who cannot see them for what they feel.

This is why we nod, brushing off questions and probings, desperately hoping that the worst outcome of the night is an uncomfortable two-person listening party. But we know to account for otherwise, just as we know we very well may not be able to escape it. The knowing is communicated in the quiet – in the fear of saying “no.”