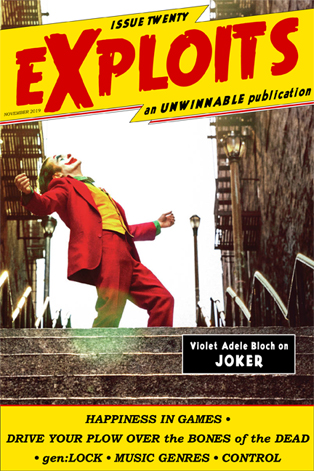 This is a reprint of a feature story from Issue #20 of Exploits, our collaborative cultural diary in magazine form. If you like what you see, buy it now for $2, or subscribe to never miss an issue (note: Exploits is always free for subscribers of Unwinnable Monthly).

So the joke went.

“Be sure you drop some 4Chan dogwhistles,” Roy warned me. “Make the shooters think you lurk.”

I laughed out loud. In my throat, not my chest. That was one day prior.

As a rule, my usual arthouse theater is deserted after 8:30. That’s when I typically go. I like the dark, the empty rooms. My screening wouldn’t be hit by incel terrorists. There would only be one trans girl there, watching it ironically in a hoodie.

They wouldn’t think to kill me.

Not only me, at least.

I wouldn’t be a statement.

It’s all as subtle as Keith Richards playing Jack Sparrow’s dad. In a nightmare, a cis man holds a gun to my head and paints the drywall behind me red.

“Great soundtrack,” someone said to me in a comic shop a week later. “All scratch cellos. Sounds like John Cale getting pushed down a staircase.”

John Cale co-founded the Velvet Underground in the 60s. He’s a classically trained violist, and he made the analog electro-drone textures in songs like Venus in Furs. Andy Warhol also made him, along with the rest of the Velvets.

And Warhol also made the Superstars famous – random people he decided were celebrities. I say random, but they were mostly famous, old-school transsexuals like Candy Darling and Ultra Violet.

That’s who I named myself after.

The Joy of Labor in Wilmot’s Warehouse