It’s the first appointment slot on the first day of E3 and I’m being steered into a dark and chilly meeting room on an upper floor of the Los Angeles Convention Center. Techland Publishing is about to show twenty of us a hands-off demo of Dying Light 2, set to release in early 2020. I’m ushered into a surprisingly plush row of seats to find an unwieldy box already sitting in my spot. “Anything you find in your chair is yours to keep,” chirps the man who will be leading our demo. Inside the box is a block of thick foam cradling a painted resin statue of the game’s protagonist, a casually dystopian parkour master named Aiden. I own exactly one videogame statue, a bishouju version of Mass Effect’s Commander Shepard that I picked up because she has black hair like my own version of the first human Spectre. I don’t feel connected enough to Aiden to get excited about taking this mini-monument home with me but I recognize a nice enough PR gesture even if it does mean carrying around the giant box by its shiny ribbon handles for the rest of the day.

After taking a cue from someone I assume is a Techland PR person, the developer who told us we get to keep our Aiden statues introduces himself and another man who will be steering the playthrough we’re about to watch. The dev at the controls waves at us briefly then hunkers down behind a high-walled desk, serious. The first dev, the one who will end up narrating the encounter, kicks things off by running down some stats on the game and the demo we’re about to see. Having not played the first Dying Light, I’m fresh to both story and gameplay. Taking place in a zombie-infested post-apocalyptic wasteland, Dying Light 2 aims to achieve what so many open-world games aspire to: a fully immersive experience where every player-choice matters. I’ll admit to repressing a sigh at this line of marketing – how many times can we choose red or blue (or green) only to hit all the same narrative beats with pretty much only our avatar’s oscillating level of snarkiness as flavoring? But when the dev says that means any complete playthrough will only ever show 50% of the game at most and that any NPC, quest-giver or none, can die or be killed at any point, I have to admit I’m listening. 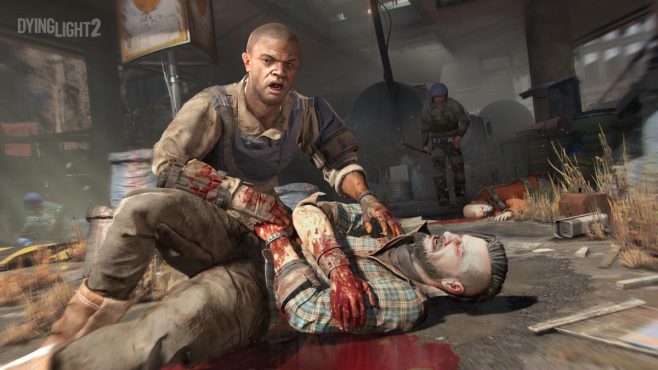 After meting out the positives from the marketing sheet it’s time for the demo. The player-dev is still quarantined in his tiny cubicle facing us with a giant projector screen behind him. The light from whatever small screen he’s staring at in his corral glints off the top of his wireframe glasses. Our cheerful leader takes his spot behind us in the back corner of the room, resembling a traditional theater ever more as the lights go down. The demo starts with Aiden walking into a bar. Patrons carouse and a woman sings Metric as Aiden and we, seeing through his eyes, climb the rickety stairs to meet with friend and bar owner Frank. Along the way, we nonchalantly look to the right and hang back to watch the chanteuse sing a verse, then turn and move towards Frank once he calls us over.

Aiden’s movements are so smooth and every interesting moment so carefully yet casually framed I forget that someone is actually playing this in the room. For a second I’m sure I’ve been taken for a ride, that the reason we can’t see the player-dev’s hands or setup is because he’s really doing nothing, that this has all been pre-recorded elsewhere. This man in his late forties who reminds me so strongly of my school friends’ dads telling corny jokes and playing stupid pranks is playing one on all of us now. His looking hunched and concerned as a just a bit of theater, I’m sure of it.

Then he slips up. We’re chasing a getaway van after a deal for clean water goes wrong and Frank gets gut-shot. Aiden vaults across the map, leaping and somersaulting and swinging on ropes. Watching it on a giant screen in the dark, it’s exhilarating and heady and I’m reminded of Mirror’s Edge in a good way. Despite playing this demo hundreds (thousands?) of times, though, our stalwart player-dev falters on a rope and tumbles down to a nearby ledge. There’s nothing to see here, no strains of music on the wind. The developer who’s been narrating the action from the back of the room lets a little edge into his voice as he explains it’s important to pay attention to the indicator on the HUD so we don’t lose the van. We need to get safely inside of it before we reach the enemy faction’s region or we won’t be able to get into their compound during daylight. “Go, go, go,” he intones in a volume lower than the one he’s been using the rest of the time. It’s pointed more directly at the man at the desk. Player-dev goofed and now, as my former theater professor would say, things are dangerous. This performance has some grit and this scene might fail. (It most certainly will not, but the possibility – the possibility is delicious.)

Player-dev goofed and now, as my former theater professor would say, things are dangerous.

Player-dev adjusts, corrects, rectifies. His remedies involve a bit of strain and his formerly flawless acrobatics take more effort, seem even a tad athletic if that can be believed. I’m suddenly fully awake and riveted, feeling the same thing I feel when I watch my friends fight a final boss or barely complete an objective during a timed run. The rest of the mission gets completed: clean water gets delivered to Frank’s town, Frank doesn’t make it (though he can in another playthrough), Aiden lives to wall-run another day. I was invited to this demo to get hype. Player-dev practiced his well-timed camera maneuvers to give us a polished playthrough to get us hype. But his stumble is what made me feel electricity; his improvisation is what made me feel potential. He gave a gorgeous performance replete with mistakes and adjustments and a feeling that whatever happened in this room could only happen in the here and now. Dying Light 2 might just be a world I can play in, one in which I can follow a script but leave myself room to fuck up. That’s immersion.

They send us out with our swag statues and our commitment to toting them around, our own performance to play. The E3 2019 Aiden Companion Quest easily identifies those of us invited to see the demo and all week long I see crews of journos bearing their boxy burdens up and down escalators, using them as impromptu seating while waiting in lines for the Sega rock wall or gingerly placing them between their feet while paying for a tray of chicken fingers. A whole cast of games writers carrying the prop that marks us as such, regularly banging our shins with its edges. I’m hype.

Out With a Bang – The History of Fireworks