Not many would accuse Solo: A Star Wars Story of being a great film. Its development was so fraught and expensive, and its box office returns so comparatively slim, that it effectively put on hold Disney’s plans for a long line of Star Wars spin-off stories. (I don’t personally think the film is any worse than the others Disney’s released in the series, though I don’t know if that’s a compliment to any of the films in question.) Beneath all of this industry drama, though, the musical score written for the film by John Powell stands out as a highlight among all of the Star Wars-related material that Disney has produced since buying the franchise from George Lucas. It manages to offer a fresh take on the series while capturing, perhaps for the first time since the series relaunched, the intangible something that made the original trilogy so wildly popular.

For me, the track that best evokes the Star Wars feeling, whatever that might be, is the love theme Powell wrote for the film. I don’t know that I could recount here the plot of Solo, or even most of the main characters, but this theme has stuck with me. It recalls John Williams’ original scores without being too indebted to them, pairing a memorable melody with lush orchestration.

Many of Williams’ themes for the series open with bold, ascending intervals – the main titles, the “Force” theme, Han and Leia’s theme (a development of Leia’s theme, which opens similarly), “Across the Stars” from Attack of the Clones (it’s a good score, sorry), among others. Powell’s love theme starts instead with a kind of meandering, descending figure that only gradually climbs to the soaring heights of the earlier cues. He develops the melody through various key changes and places it in different registers and instruments, following an approach that Williams most certainly did not invent but that he included as an identifiable element of the Star Wars soundscape. 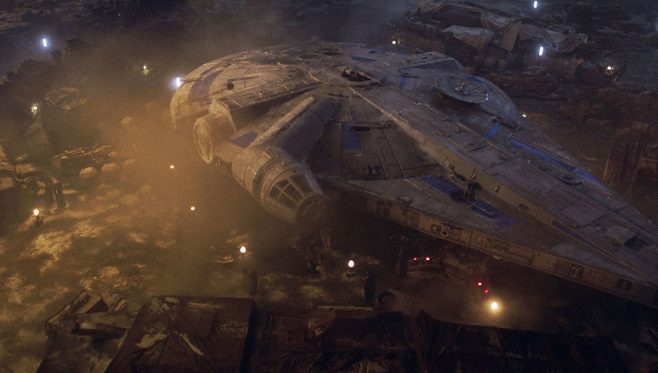 Powell’s cue here sounds distinct but nostalgic. It’s got a rich symphonic texture that stands a bit apart from some of its contemporaries by harkening back to an earlier approach to scoring – there are no electronics or pounding low strings here, for better or worse. It’s the same atmosphere that Williams sought to evoke in his original score at Lucas’ request back in the ‘70s.

There’s a real risk in going down the nostalgia route, of course. We are currently swimming in a sea of corporate-engineered nostalgia that often does little more than pander to audiences by dragging references to old things onto the screen. Solo itself is guilty of this throughout its runtime, and the entire Disney-era Star Wars enterprise – along with a good deal more of the company’s output – could plausibly be described in the same way. Whatever the failings of the film, or franchise, or entire industry, however, I think Powell’s music stays on the safer side of the endearing/embarrassing nostalgia split. Given the circumstances, this is no small task.

Hob is So Minimalist it Disappears