I grow weary of minimalist and spartan storytelling, particularly when a game has so little to offer besides.

Hob is an open world 3D platformer, following a silent protagonist on their journey through a decimated world that has to be put back together piece by piece.  At least, I’m assuming that’s the plot because that’s the description I read for the game on the PlayStation store page. Within the actual game, almost none of that narrative comes through and I simply ferry the main character from button to lever to ladder to open up more areas and repeat this bland operation of simple machines with a slightly different background.

Hob’s narrative structure is one that front loads the vast majority of its plot within the first half-hour of play.  At the start, your character is being led around a broken world by a robot speaking jibberish, for reasons that are never made clear.  Eventually you wander up to a wall of purple goop that’s taking over different areas of the world and, in a move that I’m certain will absolutely shock everyone reading this, you get too close and are attacked by a tendril, resulting in some sort of infection.  Whether this would have killed you or worse is ultimately unknown, because robot friend proceeds to amputate your arm and then replace it with a robot arm that he tore off his own body as the intro credits roll. There’s not an ounce of dialogue throughout the game, but for these scenes you didn’t need words.  It’s gut-wrenching and perfectly establishes the kind of relationship these two share with one another, and legitimately excited me for the rest of the game. Unfortunately, the game immediately devolves into a generic slog of slash enemies, press button, repeat.

The world of Hob is largely composed of overgrown wildlife scurrying across a variety of plateaus, occasionally broken up by deformed bipedal soldiers also scurrying across a variety of plateaus.  There’s no reason given for why certain creatures want to attack you and others have a petting icon pop up when you approach. Some of this world’s inhabitants simply feel the need to lash out at you because reasons.   All right.

Beyond these enemies you have platforms to climb and puzzles to solve to piece the world of Hob back together, because…excellent question, actually.  Why am I trying to put this world back together? It’s not as though there’s a city which needs to be reassembled like in Bastion.  I’m not trying to unite the factions of a war-torn realm.  I’m literally running around, pushing buttons and pulling levers to raise or lower different chunks of larger environments (like a reservoir or forest) to be eye-level with my character.  And weirdly enough, I’m not entirely sure I even should be doing that.

Your character (who I shall call Block, because I hope and pray that the devs don’t want you to actually refer to him as Hob after they deliberately hobbled him at the start of the game) is trying to accomplish this reassembly mission all alone.  There are no other people like him anywhere across the land, save for a single other adventurer who occasionally pops up in a cutscene now and again whenever the game feels the need to remind you that there might actually be plot you ought to care about.  Block’s actions are driven entirely by the orders of his robot friend, who will point at some nonspecific goal in a vague direction before a marker appears on your map. You never see a robot like your friend throughout your travels, excepting a massive pile of their corpses in a robo graveyard.  You do, however, see other types of robots welding different parts of platforms underground when crawling through certain dungeons. Are they fixing the platforms? Are they disassembling them? By running around and raising or lowering certain chunks of the world at random with absolutely no warning to the worker bots, and I making things better or worse?  More than that, have I ever accidentally murdered these workers with my sudden alterations to their landscape? In one instance my companion wanted me to raise the reservoir platforms, but for all I know messing with these controls has decimated the meticulous repair work of Robot Union #312. Robot friend never explains why I have to do these things, and Block never questions it. 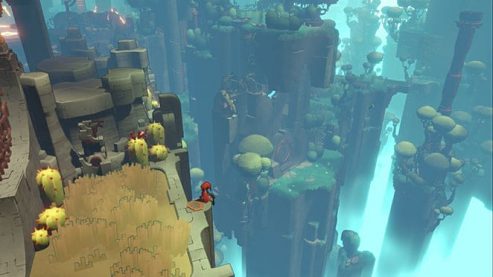 Hob is a game that expects you to push through the platforming and combat without ever questioning why.  What caused this world to become so off-kilter in the first place? Why is this robot so intensely devoted to Block?  Who was meant to inhabit this realm before I came here, and to what end? The architecture I witnessed throughout the game was almost entirely pathways and control panels with no sort of housing or clustered settlements, like having Roman roads but no Rome to which they led.  There is a transit system to warp you across the map, and each one has a unique glyph on the ground before it to designate where you are, but beyond that there isn’t a single shred of writing anywhere else. Did the world’s prior inhabitants utilize a standardized form of written communication or not?

I slashed my way through Hob without understanding why I had to kill these enemies.  I pushed buttons and tugged at switches, unable to determine whether I was truly helping the world through this or simply following the dangerous orders of a mad robot as a result of Block’s unwavering devotion to their savior.  I’d hope that there might be answers to these questions further in-game, until I found the first archive.

Let me begin by saying that I didn’t intend to find this cavern.  I’d hit a snag in my exploration and was simply combing through the area, hoping beyond hope that I might accidentally stumble my way back onto the main path.  I found what seemed like a promising pathway hidden behind several bushes and slashed my way to a small cavern, wherein I discovered a projection that showed a group of individuals boarding some kind of vehicle and leaving for parts unknown.  At least, I assume that they were leaving, given that the achievement which popped up was called ‘Exodus.’ And that’s another issue; these little snippets of plot are buried around the map, hidden in such a way that discovering another part of the story becomes a PSN achievement that less than a third of players will actually happen upon.  The story is an extra feature that players aren’t meant to mind, and tracking down story elements, therefore, is to be treated as an unexpected bonus vs a core element driving the game forwards.

At this point I became convinced that you are not meant to play Hob for the plot.  You are not to worry about the what, the why, or how of anything happening in the game.  I got a bit further in the game after this, managing to clear out most of the purple clumps and getting two Titan cores (for reasons, I suppose) before finally calling it quits.  I don’t understand why my character needs to do any of this, or why I should care. Supposedly the ending answers a lot of my concerns, but you can’t get your player invested in a platformer that demands RPG-level hours of time (there’s another achievement for finishing everything in under 5 hours, fyi) with the vague promise that their questions will be retroactively answered in the final stretch of game.  Couple this with shoddy combat and frustrating platforming (thanks to a very uncooperative camera) and you end up with a game that is acceptable at best.

Hob is available on Steam and PlayStation.  It’s functional, and that’s the best thing I can say for it.