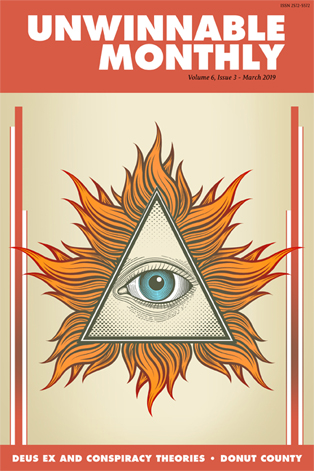 This is a reprint of the Letter from the Editor from Unwinnable Monthly #113. If you like what you see, grab the magazine for less than ten dollars, or subscribe and get all future magazines for half price.

Welcome to the March issue! Let’s check it out, yea?

Our cover story, by Mark Hill, takes a look at the original Deus Ex game and how our relationship with the conspiracy theories it threads into its plot has metastasized in the nearly 20 years since. Can we still still look at the game in the same way we once did?

Our second feature, by Jason Dafnis, looks at Donut County and how it reflects the concept of white guilt and gentrification. Team Unwinnable has been discussing the game in this context for months and I am glad to finally be publishing a story that tackles the subject.

We have a couple of those accidental themes that I love so much running through the issue. For instance, my column this month is also about about looking to the past and re-evaluating, in this case, Ozzy Osbourne records. The substance is different than Mark’s essay, but the lens is similar.

The end of the world is also on our collective minds. Gavin Craig ponders the realistic probabilities of a post- apocalypse that pop culture often overlooks. Yussef Cole, meanwhile, celebrates the solitude and lack of responsibility that post-apocalyptic videogames offer. Finally, our sponsored story looks at Paradise Lost, a forthcoming post-apocalyptic game that build around the stages of grief and wonders at what new kinds of beauty and love we’ll find after the end of things.

Three other essays share a subtle, connective psychological thread as well. Megan Condis uses Netflix’s recent Abducted in Plain Sight to look at broader issues in the true crime documentary genre. Deirdre Coyle goes on a date with a ghost and, naturally, ponders life and death. Jason McMaster looks at his long history of struggling with obsessive compulsive disorder.

Of course, we have plenty of essays that aren’t linked by coincidence, and they’re swell too.

Our artist spotlight falls on Maddison Morganstern, glitch witch extraordinaire. Ben Sailer uncovers a surprising Achilles’ heel in Ace Combat 7. Corey Milne charts his month’s long journey to the center of the universe. Matt Marrone, with two kids and no time, despairs of ever finishing Haruki Murakami’s 1Q84 and files his first half-baked book review. Sara Clemens riffs on “Frank Sinatra has a Cold,” by Gay Talese, to get her thoughts on Captain Marvel out. Avowed Resident Evil 2 fan Rob Rich hones in on the one thing the recent remake fumbles. Adam Boffa finds a silver lining for Solo: A Star Wars Story in the film’s soundtrack. Astrid Budgor, as always, harvests a rich crop of new (and not so new) metal.

In other news, Unmissable, the official Unwinnable Podcast, hosted by Sara Clemens and David Shimomura is settling into a comfortable every-other-week release schedule. You should check it out! (You can listen to the Vintage RPG podcast on the alternating weeks.)

Also, if you’re in the greater metropolitan area of New York City, we’ve got our 17th Geek Flea kicking off on April 27. Come and say hi!
That’s it for this month. See you in a couple weeks in a new Exploits!

A Witness to Assassination – The Story of Major Henry Rathbone