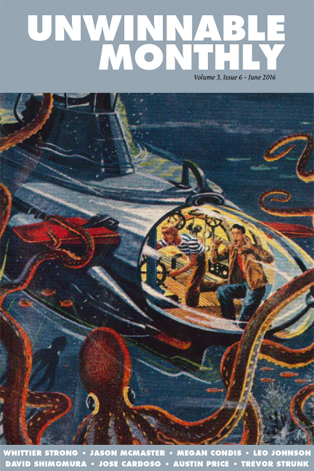 I have been editing behind the scenes at Unwinnable for quite some time. It’s a nice little gig where I can have a positive influence on both seasoned and up-and- coming writers. I think that’s a very important thing to be spending my free time on and I really like working with our fearless leader Stu Horvath, so I get a lot out of it personally.

When Stu asked me to take over this month (he had a lot of harrowing personal things going on this month), I did so with much trepidation; it was like he was asking me to guard the Hope Diamond for a month. Luckily I didn’t mess anything up and I had an immense amount of help from Harry and Jason.

We managed to get things ship-shape and ready for publication. Still, without Stu here, we were less than the well-oiled publishing machine that we usually are.

I think this issue came out sterling, despite not having Stu at the helm. But at the end of the day I am so happy we have Stu back in full force. After all, he IS Unwinnable.

An added bonus – I will use that free time to play Dark Souls 3.

This month’s issue is all about those meddling adventurous kids. We hope you enjoy it as much as we did putting it all together.

We’re late this month. Sorry about that.

It has been a tumultuous month for me. My gran passed away. My mom had a major surgery. There’s been some other stuff, too. I won’t bore you with the details. Just take this as a reminder that everything has a habit of happening all at once, usually at the most inconvenient moment.

My absence left production up in the air. I am lucky to have an awesome team of folks helping out – James Fudge and Harry Rabinowitz with the words, Jason McMaster with the layout. They’re all part time helpers at the best of times, but they picked up my slack and made sure that the June issue got into your hands, even if it did so on the first day of July. No small undertaking. High fives all around, guys.

Some things fell through the cracks. A couple folks had stuff come up in their own lives (everything happens all at once, remember?). Never fear, though: Bestiary, Throwing the First Brick and Unsolvable will all be back next month.

On the other hand, we have the first installment of Corey Milne’s serial fiction Manadrive, illustrated by the awesome Alex Bertram-Powell. Keep your eyes on that one.

I promise the July issue (the theme is Body Horror!) won’t be coming out in August, but it will probably be out later in the month than I would like as we correct our pipeline. Anyway! Dig into Kid Adventure! Relive those fleeting days before adulthood set it! Go find some buried treasure this weekend! Happy Fourth of July to our American readers!