Outside of freelance writing, the majority of my time is spent animating graphics for the screen. This line of work includes me in the sweeping job categorization known as the arts. But I never attended art school. Instead, I went to a small liberal arts college in Ohio. My film major had to be cobbled together out of literature and art department classes. I spent my senior year racking up student debt on an independent study that involved working on my own films, with limited professorial guidance. While many of my colleagues in “motion graphics” boast diplomas from prestigious art programs at places like SVA, RISD and SCAD, I had to teach myself pretty much everything about organizing visual information in an aesthetically appealing way.

As a result, I’ve had to tackle the feelings of academic FOMO and inadequacy my entire career. “What if I had taken typesetting classes?” I groan as I futz with kerning. “What even is color theory?” I lament as I brute force my way through the color wheel. With experience, I’ve managed to leave most of that anxiety behind, but the reams of missing knowledge and years of lost training will always float along in my subconscious and gnaw at the edges of my otherwise stable relationship with my work. Thoughts of what attending art school might have been like will continue to shade my memory of the past and color my dreams of the future.

Playing Julian Glander’s Art Sqool offers me a familiar, if abstract, sampling of the imagined art school that lives in my jealous memory. Colorful, blobular forms shape a creative campus extruded into cartoonish extremes. My playful, oafish, “froshman” character exemplifies the wide-eyed innocence of the neophyte as they amble around the “campus,” gazing up at unrecognizable shapes and goofy booleans. It’s a luxurious, playful space, just as I had imagined it would be. For about thirty seconds. Then I’m handed a canvas and told to get to work. 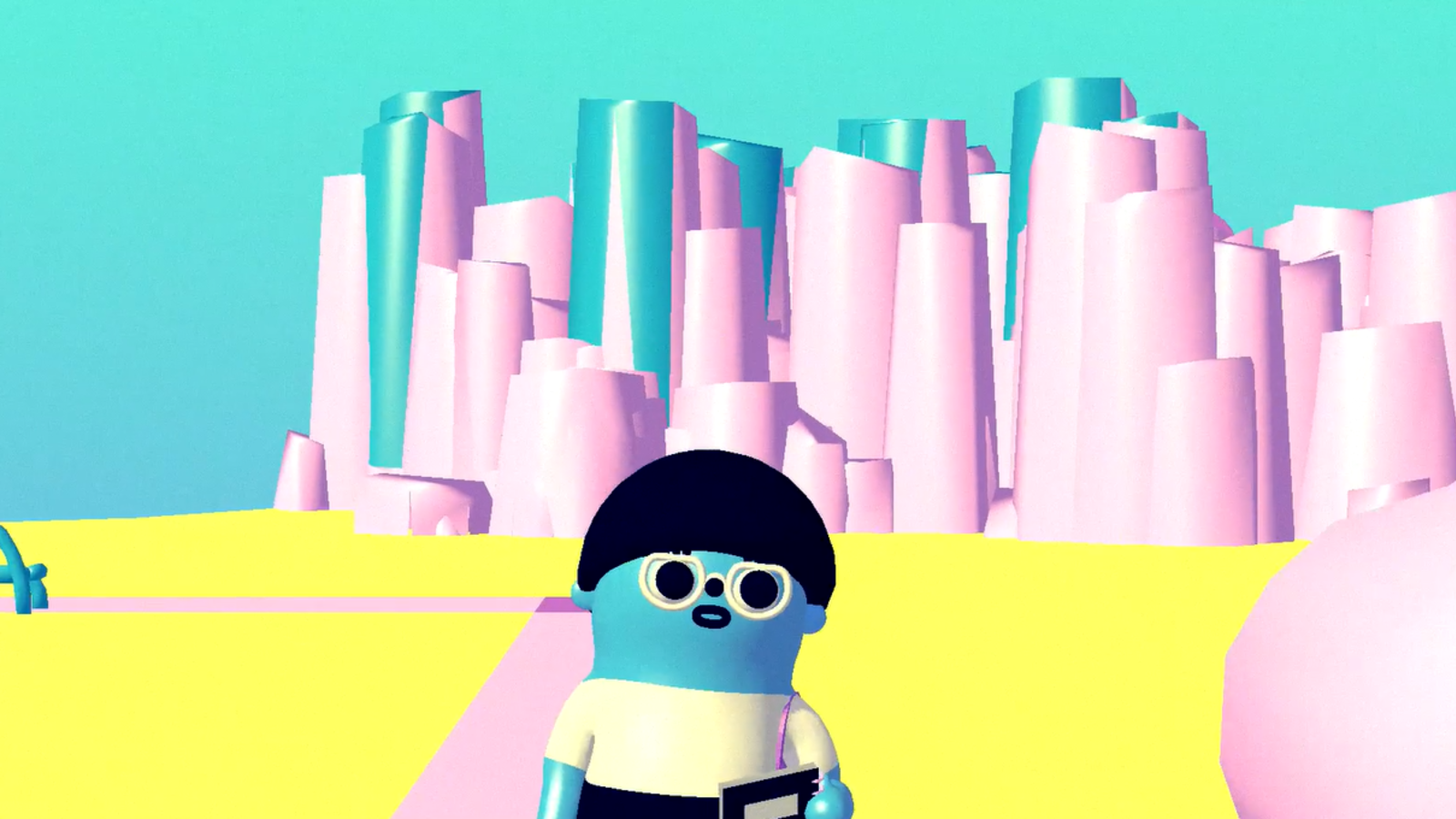 Yes, that work is drawing whatever the heck I want, whether an object in the game’s world or an idea in mine, but it remains work, a concrete task: fifty drawings to finish the game, all graded, seemingly arbitrarily. I imagine a perfectly round bead of sweat dripping down my froshman’s brow.

As I had always placed it on a pedestal in my mind, I never really considered art to be work. Working for advertising clients, addressing countless, often arbitrary revisions is self-evidently work, a grind even. Sitting in a meadow and painting the sky? That’s the romantic stuff of childhood dreams. And as much as Art Sqool is composed of the impossible vistas of dreams, what it actually asks you to do is closer to concrete, measurable labor.

I finish a piece with a flourish only to be told I have completed just seven out of fifty assignments. The breadth of the project, of actually going back to school, extends endlessly before me. This, after all, is what training to be an artist requires: practice, endless practice. Until the miraculous act of creating life out of the careful arrangement of lines and color is as rote and unconscious as breathing or walking, until your “warm-up” illustrations look like the polished finished projects of other artists, the interminable training of the artist remains incomplete. Like any activity that must be repeated until it’s an embedded skill set, there is a great deal of tedium on the road to proficiency. 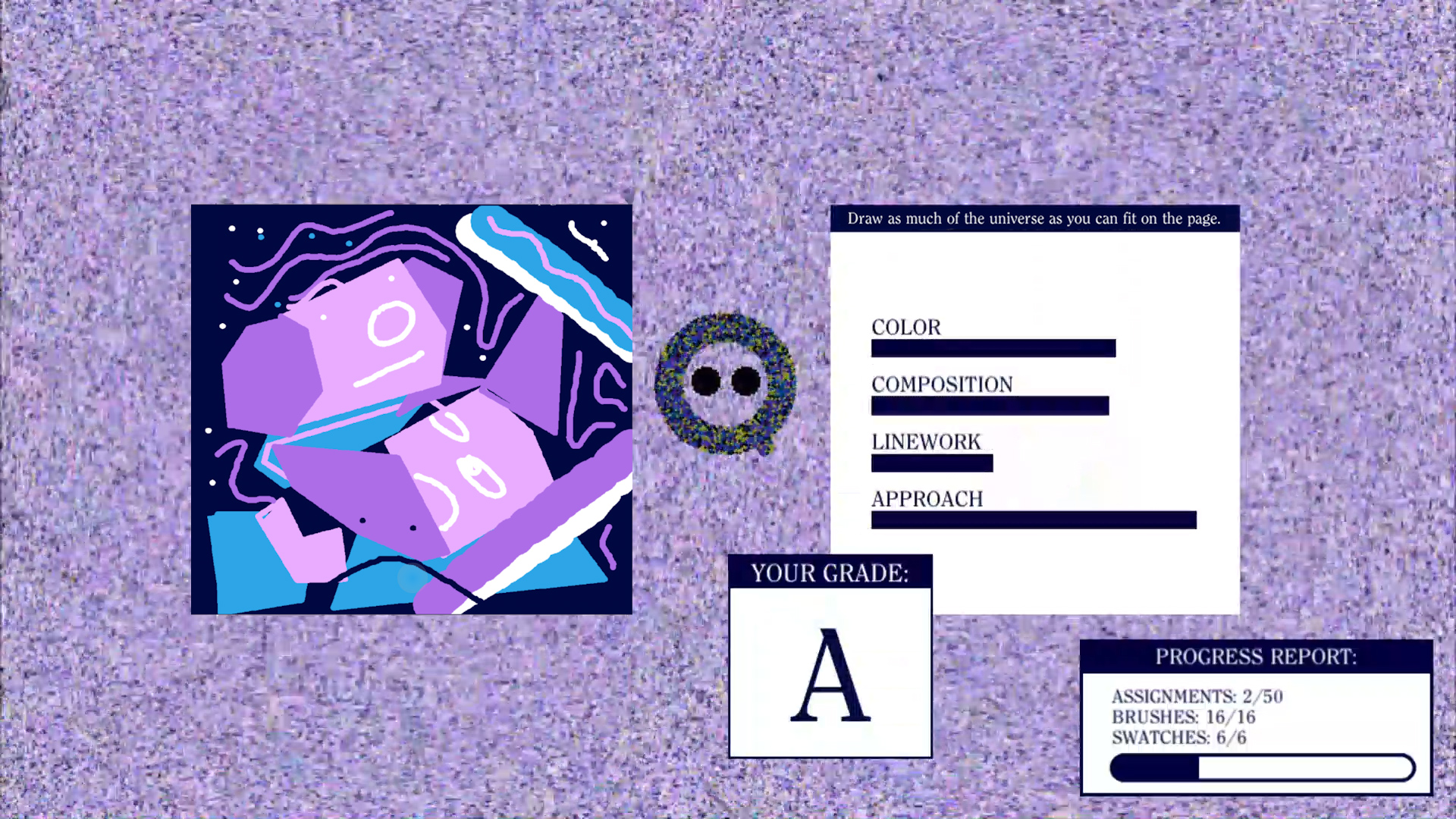 Working for clients and on commercial projects, you face plenty of tedium as well. Animation, as a craft, is built whole cloth from it. Yet for the most part, in the commercial world, the tedium feels like a necessary evil, a way to make the money necessary for survival while also getting a small measure of creative satisfaction from the time and labor expended. The creative alternative, being a full time artist, always seemed like the purer aspiration. No one to answer to but myself, nothing to prevent my imagination, unshackled by the constraints of the workplace, from being free to wander.

This is, of course, a deeply misguided notion. One that is immediately cast aside playing Art Sqool. Art is just as much work as commercial design, and often feels more strenuous due to the necessarily self-derived nature of the artist’s motivation. It lacks any of the safe assurances of success that doing creative work at a paid job comes with. It’s just painting, or sculpting, or whatever at the edge of a void, and hoping someone, somewhere, ideally with a lot of discretionary funds, takes notice.

For most artists, that client is a vanishingly infrequent visitor. The external reinforcement that comes from doing creative work at a job doesn’t exist in the same way in the art world. So it’s doubly important to draw a measure of pleasure and satisfaction from the practice itself. This resonates with my time spent playing Art Sqool. As a game, its interaction layer begins and ends on the canvas which froshman holds. Aside from those moments, between drawing, of light exploration, you’ll spend the majority of your time looking at blank canvases and trying to figure out what to draw. Realizing I need a bit more than that, realizing how much I appreciate work that presents itself as work over tedium that hides itself behind romantic passion; I feel a little relieved, and a little less chagrined, that I never went to art school.