In August my husband and I, along with our two dogs, took a two-and-a-half week, 2,448-mile road trip from Chicago to Los Angeles via Historic U.S. Route 66. Snaking its way through eight states, America’s Main Street meanders across windy farmland and winds around desert mountain ranges before finally depositing travelers on the Santa Monica Pier.

Once a popular middle-class vacation option for Americans, lately the Mother Road attracts European tourists who travel in large, boisterous groups, often renting Cadillacs and other classic cars in order to travel in style. However, the overwhelmingly popular choice seems to be renting an entire convoy of Harley Davidson motorcycles and cruising down the road in pairs, à la Easy Rider. We saw many impromptu motorcycle clubs made up of aging hipsters in too-clean, too-stiff, too-very-much-still-price-tagged black, orange and white leather garb.

In Missouri, two of them park their bikes in the parking spot directly in front of our motel room, forcing us to park our mid-sized SUV four spots away. This is early in the trip, before I realize the ubiquity of the motorcycles on the route and am therefore pretty thoroughly incensed.

“Who do these bikers think they are, acting like they own the whole entire road and every 1950’s-style charmingly appointed bungalow along the way?” I ask, clutching our 11-pound yorkie to my bosom and offering a prelude to the woman of a certain age I will eventually, god-willing, fully blossom into.

In the morning I see one of the riders rummaging through his saddlebags. A small man sporting an infinity scarf and tasteful capris, he eventually pulls out a soft grass-green hoodie to layer underneath his convertible mesh Harley jacket. Before fully gearing up to begin the day’s journey, he catches me gazing at him through our window as I finish my coffee and flashes me a warm and friendly grin. 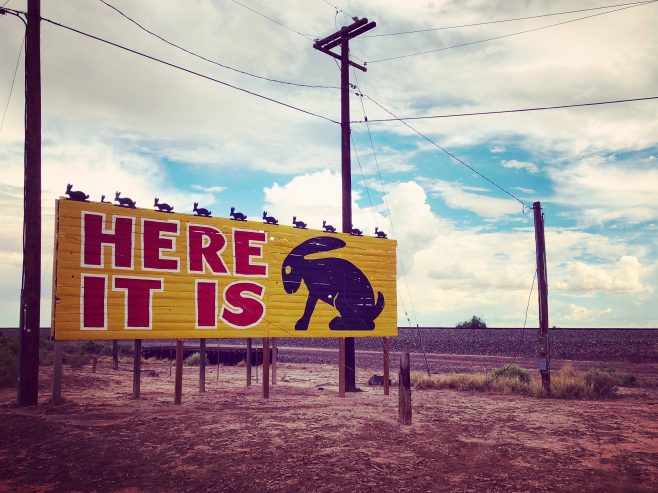 “My god, what a weirdo,” I think as he pulls away with his riding companion, because I’m a bitch. Though he did maintain eye contact a touch too long, actually.

Later in the trip, we stop at a trading post to get provisions. I pick up two tallboys of pre-mixed micheladas for the hotel later that night and a pack of prickly pear flavored licorice twists for right fucking now. As I exit the tee-pee shaped building, one of the tourist biker gangs rides past, engines roaring. I spot my capri-clad elfin friend among their number and a glint of sunshine bouncing off the lens of his mirrored Ray-Bans makes it seem like he notices me, too. Once again, his perceived gaze lingers just too long.

We post up for the night at the El Rancho in Gallup, New Mexico, a historic hotel built by the brother of film director D.W. Griffith (yikes). Lots of movie stars made the El Rancho their temporary home while filming various American Westerns, and many of the rooms are named for stars of the silver screen. We’re assigned the W.C. Fields room, which features three enormous closets and a 1 ft. by 1 ft. bathroom. After we get the dogs settled in for the evening, we leave to explore the grounds. The lobby is a stunning collection of cowhide throws and furniture made from antlers and/or wagon wheels – the Overlook Hotel’s country cousin.

We mosey our way past the hotel’s restaurant to a small bar hidden in the back and grab ourselves a two-top. The bar’s divey in the best possible way, with Formica tabletops and a velvet painting of a naked lady on the wall. Word of Aretha Franklin’s death has just hit the Twitter-sphere and someone’s put a string of her greatest hits on the jukebox.

The bar’s fairly crowded with only one bartender working, so service is slow. But who cares? We’re on vacation and the bartender seems superhumanly laid-back. We shoot the shit for a bit over the opening strains of “Natural Woman” before I notice the group gathered around the largest table is the same group of bikers I saw blow past the trading post.

Seated at the head is a man with tanned leather skin covered in tattoos. I squint to see his ink a little better and discern the Blue Whale of Catoosa, the Gemini Giant, and a crude rendering of Elmer’s Bottle Tree Ranch. He’s wearing a leather Harley Davidson vest as a shirt and embedded in his already brown chest is a giant highway shield bearing “US 66” like a brand. He’s bald with a long curly beard and wearing small round sunglasses that obscure his eyes completely. His head looks like an octopus. At his right hand, the puckish pixie in the infinity scarf sits examining a Lone Star bottle cap.

They’ve clearly been here a while and are impatiently awaiting their bill. I glance at the bartender, who’s got his back turned, oblivious. When I look back towards the bikers’ table, the imp who’s been haunting me since Missouri slowly rises from his seat and makes his way up to the bar to ask for their check. A deep well of dread forms in my chest, dropping my heart to the floor and I’m suddenly afraid for this lonely barkeep, so clearly outnumbered and unaware. 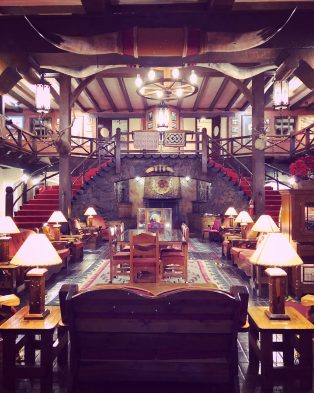 I want to shout a warning, but my tongue is leaden and dry. And anyway no, no, I’m being ridiculous – once the rascal finally gets to the bar he gains the bartender’s attention and after a bit of an exchange, communicates what he needs and all seems well. The barkeep heads to the register, and the troublemaker stays put, casually leaning one hand on each side of the opening in the bar wall. He watches the bartender at the register, looks in my general direction, then inches forward almost imperceptibly. He makes a show of shouting something towards the register, but Aretha’s blasting way too loud for me to hear, if he’s even saying anything at all. He moves forward again, and I see his front foot has crossed the threshold of the opening.

Wait. Surely he’s not going to…

Suddenly he sharply turns his head in my direction, grinning with too many teeth. With contortionist’s elbows akimbo he pulls his entire body all the way through to the back bar and casually saunters his way to the bartender, his eyes hardly leaving mine. He can’t, you can’t, what are you doing, we don’t do that here, man!

I try to scream this thought aloud but the music’s blaring and the room feels as if all the air’s been sucked into the vacuum of space. To my shock, the bartender barely reacts at all to this breach of his domain, and instead goes along with whatever this demon is telling him, taking the little devil’s credit card and running it through the machine as if he’s operating a fro-yo stand at the mall.

What am I doing in the middle of this godforsaken desert? How old is this hotel, this road, this man with the cephalopod features and his dark servant? Why won’t the lady in the velvet painting stop staring at me and why do I have to sit sidesaddle to drop a deuce in the bathroom of a room with three fucking closets?

Aretha croons about the way you make her feel while I feel anything but natural, my soul spinning as if it will fly off the face of the planet any second. In all the effort to maintain my grip on my wits, I’ve missed that both men have emerged from behind the bar and the bartender is making his way towards our table. Staring him full in the face, I can see the truth. Not the truth of the here and now, but the truth of everything forever. The server isn’t laid back – he’s numb. He’s a shell. His body may be here on Earth but looking into his eyes I can only see black voids tunneling towards the bottom of space and time, and I can’t shake the feeling that something ancient and terrific far, far away is staring back at me.

He opens his mouth and I worry I’ll be inhaled into a pit of nothingness. “What,” he breathes, “can I get for you folks?”

A Subtler Magick Filled the Air: Exploring The Sinking City