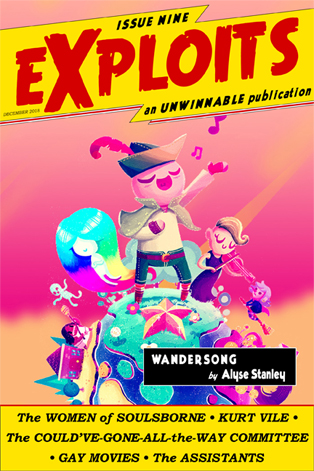 This is a reprint of the featured essay from Exploits #8, our magazine dedicated to the culture we love. If you like what you see, grab the magazine for $2  or subscribe to never miss an issue (note: Exploits is free for subscribers of Unwinnable Monthly).

Don’t underestimate the woman who levels you up.

In Bloodborne’s The Old Hunters DLC, Maria ties together the events represented in the Hunter’s Nightmare. As you progress through this side story, you find yourself going back through time to the source of the beast plague afflicting Yharnam. Maria protects this secret with her life.

You quickly realize that Maria has the same appearance as the Doll, who serves as your quest guide and level granter. She is also an idealized form of Maria created by her former mentor Gehrman. Maria’s equipment set mentions that Gehrman had a “curious mania” for her that drove him to create the Doll.

Gehrman took his interpretation of his most influential pupil and created a being meant solely for serving others. Maria had as much of an impact as he did on future Hunters’ fighting styles. Yet, he reduces her to a tool that he says “…you’re welcome to use… should it please you…”

Male fans of the Soulsborne series seem to have a “curious mania” for the games’ women as well. You’ll often see them refer to one of them as their “waifu,” or the appropriated anime fan term for wife. In most cases, they just mean that she’s their favorite character. But, there’s still an implication of obsession and possession behind the term. (We also can’t set aside the “haha funny Engrish” jokes that make it popular to say.)

Many male Soulsborne fans also consider female characters nothing but sexual objects. You can see this in play with the sexist messages left near the majority of women in the Dark Souls games.

The same cruel irony behind Gehrman’s treatment of Maria applies to male fans’ view of important female characters in the series. They reduce these women to objects, yet women form the backbone of the Soulsborne worlds.

Without women, the main components of the Dark Souls games would not exist. The series’ all-female Fire Keepers allow you to become stronger and find respite in bonfires. Dark Souls III features arguably the most powerful Fire Keeper of all. By giving her an important item, she can choose to let the First Flame burn out and end the cycle of dark and light that serves as the series’ premise. The only other character who has access to this kind of choice is you, the player.

Women also lay the foundation for Bloodborne’s lore. Themes of motherhood surround the characters and story, not to mention that Maria is just one of the prominent female figures in Yharnam. Even a large number of the game’s eldritch Great Ones and Kin are female.

Like Gehrman, sexist male fans of the Soulsborne games ignore the power these women hold. Instead of appreciating their importance, they leave messages like “try thrusting” for other players to giggle at. Do they mean any major harm when they talk about their “wives” or write sexist messages? Probably not, but little acts of sexism support larger ones.

One final note to leave you off on – even the Doll has more power than Gehrman and most male fans suspect. Certain fan theories suggest that she’s the one pulling the strings behind the plot, and there’s no lore contradicting the idea. Maybe they should have taken women more seriously.

Fantastic Beasts 2 the Crime of Cinema

Whose Head Is That Anyway? The Story of Easter Island