In Scott McCloud’s seminal book, Understanding Comics, there is a brief section on the aesthetic differences between American superhero comics and Japanese manga that I have always found particularly compelling. McCloud claims that, unlike their western counterparts, which are usually packed to the brim with constant, fast-paced action, Japanese comic books allow readers to indulge in “slow, cinematic” passages, devoting multiple panels to exploring environments and reflecting on emotional moments. As a result, they can sometimes feel a bit sluggish and unhurried to the reader who is used to new plot developments being introduced on every page if not in every panel. However, once a reader becomes accustomed to their more sensuous, fluid style, they often find themselves more than willing to dwell within the quiet spaces that develop on the page, savoring these moments that exist in the “in between.”

I posit that Terrace House, the Japanese hit originally produced by COMPANY and then later picked up by Netflix for distribution to an international audience, illustrates a similar set of design principles differentiating American reality TV from its Japanese equivalent. At first, the show sounds like a close cousin to MTV’s The Real World. At the beginning of each episode, the hosts declare their mission: to follow the lives of three men and three women from all different walks of life who have been thrown together into a (beautifully appointed) house and must learn to get along with one another. However, at no point do any of the residents of Terrace House seem interested in ceasing to be polite and starting to get real, at least according to the standard set by shows like The Bachelor or The Bad Girls Club. Instead, each series feels similar to a marathon of The Great British Bake-Off, with drunken fights and sloppy make-out sessions replaced by gentle rebukes and tender moments of encouragement. 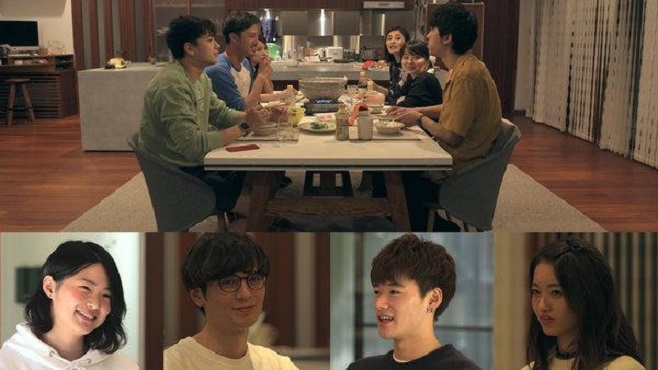 Another major difference is the lack of “confessionals,” those cutaway scenes depicting cast members tucked into a closet and seeming to react “off the cuff” to the events on the screen (in truth, these confessionals are often shot long after the event in question took place and are sometimes cobbled together out of answers cast members give to a barrage of manipulative questions asked by producers trying to literally manufacture drama). Instead, each episode invites us to a living room set where a group of six hosts who have been watching alongside us share their thoughts on the last few scenes. These intermissions make the experience of binging the show alone feel similar to the way that it feels to get a group of fans together to alternately snark and squee about The Bachelor during the commercial breaks, mixing emotional reactions to the romantic foibles of the housemates with meta-commentary about where one season fits into the series’ history. For example, when a cast member from previous seasons that were only available in Japan appears, they fill us in on her history in the franchise and excitedly speculate about how she will change the group dynamics in the house. They also sometimes reflect on what it means for the show to be distributed internationally on Netflix, occasionally musing about the assumptions that the new American audience is going to make about Japanese people generally based on the actions of a particularly immature cast member.

And while they sometimes revel in the gossipy deliciousness that their bird’s eye view of the house provides (as when the hidden cameras reveal that two of the housemates who have been tentatively dating have very different ideas about their future potential), they are always on the contestant’s side in the sense that they are seemingly sympathetic to the unique difficulties that being a reality TV star in the age of social media can present.

By American standards, Terrace House moves at a glacial pace and eschews the bombshell moments that characterize your Real Housewives and your Jersey Shores. But by providing respites from drama and letting the audience breathe in the comfort of the in between, the show cultivates a different relationship between the viewer and the gorgeous vistas and romantic fantasy that exist at the root of the genre. American reality TV, unfortunately, rarely gives us a chance to really look at those vistas, rarely allows us to sit with the feelings generated by the vicarious romance. And while that doesn’t necessarily mean that Terrace House is inherently more “real” than these rival programs, it does mean that the reality it depicts is much more pleasant to inhabit.

Indie Games for the Overworked and Underslept