I first found myself in a hospital when I was 19. A car sped in front of my bike, and I slammed headfirst into its side before I had time to even think about braking. Most of the trip there is a mystery to me; I blacked out immediately. Woke up who knows how much later in the dull light of an ambulance, strapped to a gurney, and thoroughly terrified.

This all-encompassing fear would come to define my experience with hospitals, places I only ever visited when in debilitating pain (thanks Crohn’s disease) or extreme distress (you too, depression). And even at 19, though I constantly droned on about how grown-up I was to my family and friends, amid the fluorescent lights and frenetic buzz of doctors and nurses around my bed, I cried big ugly tears for my mom.

If I as a factory-fresh adult am rendered a blubbering mess by such a facility, I can only imagine how frightening the experience must be for a child. Which is why the story of My Brother Rabbit immediately struck a chord with me. In one of the game’s main character, a young girl hospitalized by an unnamed illness, I was reminded of my fearful self in the back of that ambulance, or the freezing sting of the many oncology wards I’ve been poked and prodded in, or the blanching, sickening feeling when a doctor tells you another test brought back a big, fat “Inconclusive,” and they have no idea why you’re hurting.

As the girl’s family struggles to find a cure, taking her to specialist after specialist at a number of increasingly clinical facilities, her brother deals with the situation the only way he knows how: concocting fantastical stories to distract her with the help of her constant companion, a stuffed bunny rabbit. 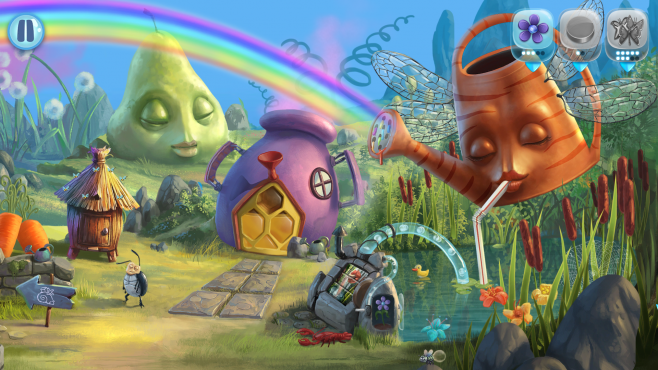 These stories build fantastically complex environments in which you explore and solve point-and-click puzzles in-game. The random combinations of the backgrounds seem pulled straight from a child’s brain, content as nonsensical as a dream but cohesive in everything’s shared bizarreness. The puzzles themselves make about as much sense as well; gather up enough soap, and their suds spew out a bubble that raises you up to the next platform; assemble the pieces of a mechanical moose, and he’ll lift your boat over the detritus caught in the stream so you can continue your journey.

Lead artist Lukasz Salata and lead designer Daniel Gizicki from developer Artifex Mundi pointed to the surrealist movement as the inspiration for the intricately extraordinary art style. However, the game’s outlook is firmly rooted in reality, specifically how the brother sees the world.  “We wanted the player to imagine it as seen through the eyes of a child, transformed by imagination and free of strings, with unusual associations between an assortment of colorful places and various objects,” they explained.

But creating backgrounds that captured that childlike spirit of imagination was a process, one that required a lot of working, reworking and additional googly eyes before each scene successfully conveyed the emotions the developers had in mind.

“Often, the very first concept of a level was comprised of mundane, typical elements of the everyday world that we later transformed through this filter of surrealism. In so doing, we achieved the twisted and unusual look that we were aiming for. If we still felt that the setting was not bizarre enough, we added something big with googly eyes in the background. This is how the colorful world of My Brother Rabbit came to be.”

And these visual pull double-duty, as My Brother Rabbit doesn’t use any words to translate its heavy themes, leaving its art to do the storytelling. Detailed drawings instruct players on how to solve its occasionally endless-feeling string of puzzles and where to find the pieces to unlock them. Some of my favorites incorporate music as well; using objects found around the room, you construct some fantastical contraption like a boat or a mechanical moose head piece by piece, with each new one triggering a sound until you’ve built an orchestra. 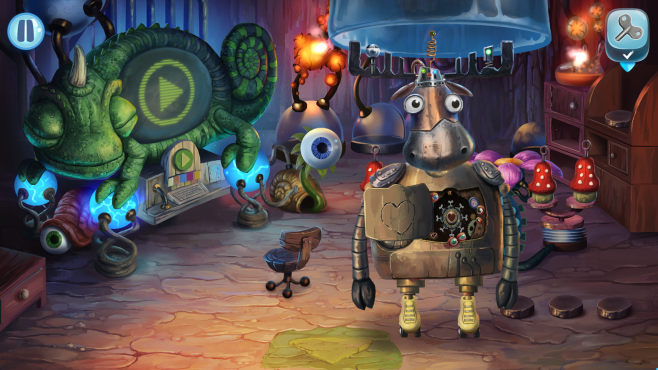 Yet even the brother’s abundant imagination can’t make doctor’s offices look any more inviting, and his recreation of her sickness is as vague as it is in real life, possibly as a reflection of his limited understanding of what’s happening to his sister. She, represented as a flower, gets doused in purple goo, requiring him, embodying her stuffed rabbit, to lead the two of them on a journey for a cure. Interspersed between puzzles, vignettes show her real-life trials through arduous tests and treatments continues, her family struggling to keep it together as they look on, helpless.

“We really wanted to create the kind of game that is meaningful,” Salata and Gizicki said. “We believe that children, although fragile, are able to cope with different everyday problems and issues by using the ways and means they know and understand.”

But though it may be serious in tone, the developers said they don’t want players to confuse it for a sad story. At its core, My Brother Rabbit is a story of the limitless potential of imagination.

“We never intended to create a depressive experience, only one that is uplifting, and shows imagination as a powerful force that will always find a way, even in the most dire of circumstances.”

My Brother Rabbit is available on Steam and you can watch its trailer here.

The Lifelong Labor of a Working Musician