If you ask anyone who knows me, they’ll tell you I’m an absolute news junkie. Though I no longer work at a daily newspaper, I’ve never managed to shake that biting impulse to be on top of the world around me, never missing a breaking story for fear of…for fear of…to be honest, I’m not quite sure anymore. But with this whirlwind news climate, keeping up-to-date is more likely to test your sanity than expand your worldview. As such, I’ve found myself tuning out of my newsfeeds in favor of soothing digital sojourns, and these indie puzzle games have particularly calmed my mind in these dark days. 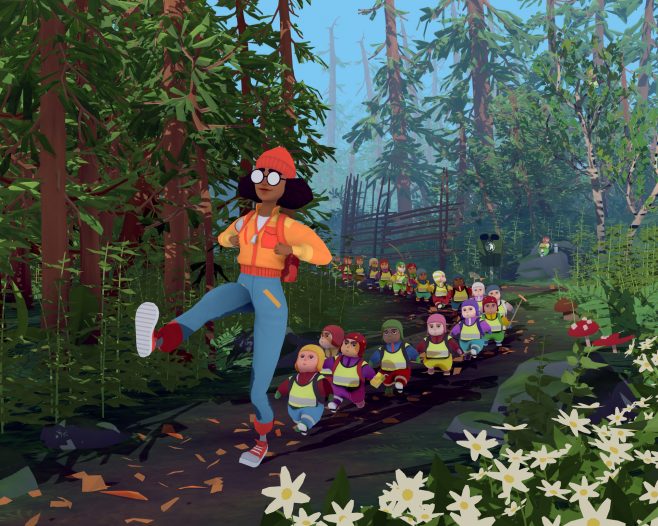 Some of my fondest memories of school and daycare are of the field trips we used to take, basically a day off to goof off, run around, and maybe (hopefully) learn something along the way. But it wasn’t until I grew a little older that I realized how stressful these visits must have been for the ones in charge: the teachers. Corralling a bunch of antsy kids is hard enough within the confines of the classroom, but keeping track of dozens of little easily distractible tiny humans while in the hubbub of a museum or amusement park – now that’s a nightmare.

And while that premise may not sound like the makings of a relaxing experience, Knåddskogen, with its bubbly sound design and silly mechanics, turns foraging for little lost munchkins into a delightful woodland jaunt.

All it took was a moment with their kindergarten teacher’s back turned for her class of 25 to scatter. Some return to their campsite activities, fishing (adorably) in wells or roasting weenies over a fire, while more mischievous urchins take to hiding in trees, trash cans and bushes.  Once found, the children join in a line behind you as you explore. And they are cute, their cheeks perfectly pinchable, each wrapped in enough warm layers to render them spherically plump, the lot waddling after you like penguins.

The game’s few puzzles boil down to throwing children at your problems, and I mean that quite literally. Whether its felling trees, knocking down children from branches, or waking a snoozing kindergartner, aiming and launching your juvenile projectiles is the only way to interact with your environment, and it never stops being hilarious. They even shout “Wee!” as you chuck them.

And all this to the delightful tune of an electric xylophone and flute that adds an extra bounce to your laughably exaggerated steps and makes the children seem like their marching to the beat. It all combines for a simply charming experience, that, coupled with its short length, felt perfect for breaking out for a shot of fun on otherwise gloomy days.

Knåddskogen is available for free on Itch.io. 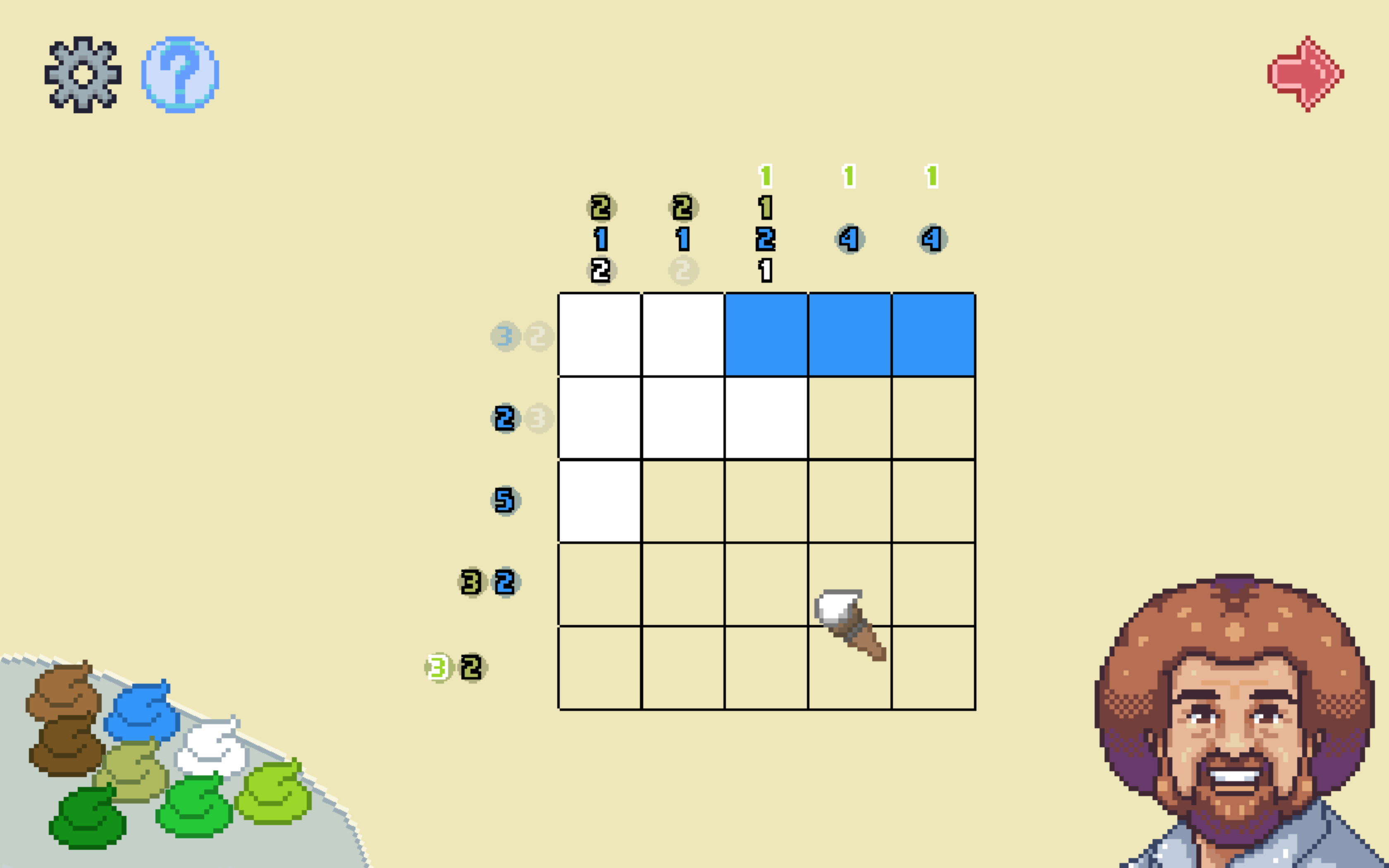 While the puzzles in this title are a bit more challenging, a pixelated Bob Ross is there to hold your hand along the journey, offering encouragement and judgement-free observations as you paint your equally pixelated masterpieces by the numbers.

And it’s in these numbers lies the bulk of Bob PicRoss’s challenge. Using rules borrowed from the mobile game Hungry Cat Picross, each of the game’s gridded paintings is surrounded by colored numbers denoting how many squares of the corresponding color belong in each row or column. Solving each portion requires techniques from the more widely recognizable Sudoku, only in this case you’re carefully lining up pre-set colors rather than numbers.

This limitation of input options keeps the puzzles just on this side of difficult, and the lack of penalties for wrong attempts as well as the chill-wave elevator music makes solving them a calming if somewhat time-consuming exploit. Before I realized it, I’d wiled away 45 minutes learning the joy of painting, easily the longest I’ve dedicated to an indie title in a while.

While I know it was a project for this year’s Awful Summer Jam and thus unlikely to be expanded, the passive nature of clicking at colored squares and amount of time it takes to finally get things right almost makes me wish this was a mobile experience like its predecessor. Ah well, I’ll just have to continue picking at it on my laptop, trying to look like I’m busy writing when, really, I’m making happy little accidents.

Bob PicRoss is available for free on Itch.io.