This feature is an excerpt from the cover story of Unwinnable Monthly #105. If you like what you see, grab the magazine for less than ten dollars, or subscribe and get all future magazines for half price.

In early June, a viral photograph of a colorful poster in a kindergarten classroom was being passed around on Twitter. The poster was designed to teach kids the lyrics to a song that would help protect them in case of an emergency. Sung to the tune of “Twinkle, Twinkle Little Star,” the lyrics read:

Shut the lights off.

Go behind the desk and hide.

Wait until it’s safe inside.

Now it’s time to have some fun!

The photograph captures our woefully inadequate attempts as a society to prepare our children to deal with a problem that we adults have utterly failed to handle on their behalf. But it also raises the question: How do we teach kids about those huge, hairy topics that sometimes throw even the grown-ups for a loop? How do we tell our kids about things like terrorism and racial discrimination and war? How do we explain the images of tearful children being torn from their parents’ arms along our borders?

Unfortunately, we can no longer rely on Fred Rogers, the host of the long-running PBS children’s program Mr. Rogers’ Neighborhood, for guidance. He died from stomach cancer in 2003 at the age of 74. Luckily, we can look to Morgan Neville’s documentary, Won’t You Be My Neighbor? (2018) to get an idea of what he might tell us if he were still around. It seems that our cultural instinct in the current moment is to wrap children up in noisy, colorful distractions, the better to hide the horrors of the wider world from them. But this strategy is more about protecting ourselves from the discomfort of speaking seriously with our kids (and taking them seriously in return) then it is about protecting them from danger. 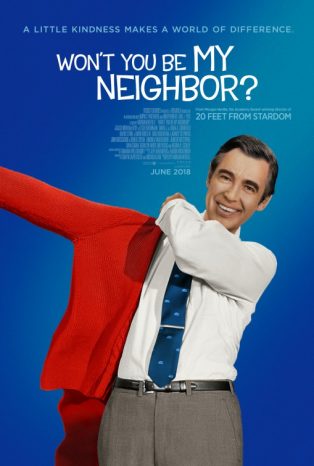 Pete Hammond, a reviewer for the website Deadspin, calls the film the “perfect antidote for the Trump era” and, of course, we cannot help but compare the rapt faces of children eagerly absorbing messages of love and acceptance we see on the movie screen to those horrific photographs coming out of facilities that are, essentially, concentration camps for migrant children (our behavior has certainly been anything but neighborly). But it is important that we not surrender to the sense of calm and safety that the film instills in its audience. Won’t You Be My Neighbor? must not be viewed as a mere vacation from politics. It is a call to action.

After all, as the film demonstrates, Rogers himself regularly engaged with political topics on his show, soaking his feet in the same kiddie pool as his African American policeman friend in an era where swimming pool owners would rather throw caustic chemicals into their pools than allow black children to swim in the same water as white children and dedicating an episode to explaining what “assassination” means in the wake of the murder of Bobby Kennedy. Especially poignant in our current moment is the special focus given to the very first week of programming, which featured a storyline about King Friday XIII calling for the creation of a troop of border guards and the erection of a wall topped with barbed wire to prevent the Neighborhood of Make-Believe from undergoing change.

When I left the theater at the end of the screening, I found myself wiping tears from my eyes, strangely buoyed by the reminder that someone out there liked me just the way I was. My fellow patrons were also affected and we found ourselves laughing at our shared secret vulnerability. But as I walked out of the matinee show and into the sunlight, I knew that I had been charged with a sacred duty: to care for the people in my neighborhood and to let them know with word and deed that they are loved. Imagine if those kids being kept in cages down in Texas were instead being told:

I have always wanted to have a neighbor just like you!

I’ve always wanted to live in a neighborhood with you.

So let’s make the most of this beautiful day,

Would you be mine?

Could you be mine?

Won’t you be my neighbor?