Remember Rachael Dolezal, the president of the NAACP in Spokane, Washington, who insisted that she “felt like a black person” even though she was actually white? This year, Netflix made a documentary about her called The Rachel Divide (Brownson, 2018) and it is pretty much everything that you would expect it to be. It goes in depth into Dolezal’s awful childhood, when she and her adopted black siblings were abused by wacky fundamentalist parents and a sexually predatory older brother. It also presents some of the many critiques that black women have leveled against her, including the idea that her performance was a way of usurping other black voices. Ironically, by choosing to focus on Dolezal in the first place, the filmmakers seem to be contributing in some small way to that same erasure. The documentary focuses a little too much on who “gets” to be black (“Who is the gatekeeper for blackness?,” Dolezal asks. “Who can protect it, define it, own it?”) and not enough on the special privileges that Dolezal receives for being white, including book deals and television interviews galore. It is at times cringe-worthy, frustrating and unsatisfying, a curiosity that has less to say about racial politics than it thinks it does.

But there was one quote buried within this movie that has really stuck with me since I heard it. It wasn’t uttered by Dolezal herself but rather by Jeff Humphrey, the local news reporter who first “outed” Rachel as a white woman in disguise. At the beginning of the film, we learn that Dolezal had told police that she had been the victim of a hate mail campaign. There are some who believe that Rachel planted those letters herself in a desperate bid for attention, though, as the film points out, there is at least some evidence that they might be legitimate and the police never actually got around to finishing their investigation after the scandal about her background blew up. However, Humphrey’s stated reason for pursuing the story seemed to be more about his own need to protect white fragility than anything else; he told the filmmakers that he felt compelled to expose Dolezal because “Rachel’s complaints that she’d been a victim of hate crimes made it appear that racism and the white supremacist movement was making a comeback, and it wasn’t. And because it wasn’t, we felt compelled to out her.” 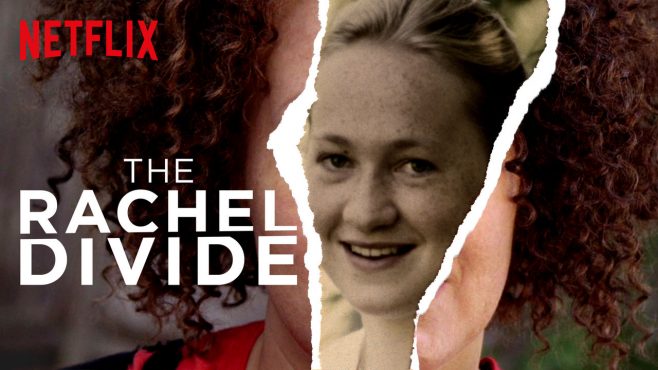 Of course, in the year of our Lord 2018, this comment comes across as extremely naïve at best and maliciously deceptive at worst. After all, as I write this review, neo-Nazis are clashing with counter-protesters in Portland and Washington DC is preparing for another white supremacist rally next weekend on the one year anniversary of the one in Charlottesville that ended in the death of Heather Hayer.  Meanwhile, we can’t go a single day without hearing the story of some Permit Patty or BBQ Becky calling the cops on black folks for enjoying a day at the pool or having a paper route. The only plausible way to deny that the white supremacist movement is making a comeback is to rightfully point out that it was never on the wane in the first place.

In the wake of current events, we might ask why Netflix thought that pulling Dolezal back into the spotlight was a good idea at all. This is such an important moment in our history and the fact that we are dedicating resources and attention to retelling Dolezal’s story instead of listening to the stories of black women is troubling. The film does take time to point out the harm that Rachel inflicts on the people around her, ranging from her fellow activists in the NAACP who felt that their credibility in the larger community had been damaged to her own family members, who had to deal with subsequent media feeding frenzy. But ultimately, what this documentary seems to inadvertently argue is just how toxic the constant centering of white perspectives is to discussions on race, such that even white folks who actually want to help seemingly can’t conceive of stepping away from the microphones and letting black people speak.

Megan Condis is an assistant professor of games studies at Texas Tech University. Her book, Gaming Masculinity: Trolls, Fake Geeks, and the Gendered Battle for Online Culture, was published in 2018 by the University of Iowa Press.

The Shape of the Devil