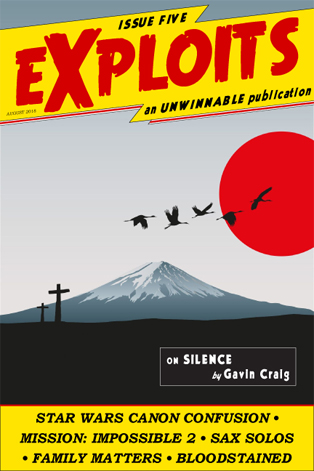 This is a reprint of the featured essay from Exploits #5, our magazine dedicated to the culture we love. If you like what you see, grab the magazine for $2  or subscribe to never miss an issue (note: Exploits is free for subscribers of Unwinnable Monthly).

Back in the 90’s, Lucas Arts released the groundbreaking 3D action game Star Wars: Dark Forces. It defied expectations in many ways, but one of its longest enduring elements is its iconic enemies: the Dark Troopers, a group of ruthlessly efficient and imposing combat droids. They’re so iconic that they reappeared in multiple stories and were one of the first elements Disney re-canonized after their acquisition of the Star Wars franchise. In fact, Dark Troopers have been re-canonized four times in as many years.

Disney’s solution for handling years of continuity (and the errors that came with it) was to wipe the slate clean, cherry picking the best ideas and streamlining everything – the company refers to the old material as Star Wars Legends now. It’s what the canon needed, but this meant that save for The Clone Wars, Star Wars suddenly had next to no backstory. While they dedicated initial efforts towards the new film trilogy, Disney also set multiple projects in motion to flesh out the original trilogy and established a story group overseeing continuity, ensuring there wouldn’t be contradictions in their new canon.

One of their first releases, Commander, a real-time strategy mobile app, had the earliest keys to the toy box. A quick appetizer of a game, the app nonetheless re-canonized a wide swath of Legends’ Imperial units, prominently displaying the Dark Trooper on its banner art.

Except, directly after, we were introduced to the Purge Trooper in Star Wars: Uprising, a mobile RPG. Next, the Death Trooper in Rogue One. Then, on the animated series Rebels, we received the Imperial Sentry Droid. Each of these is the same concept: an elite cybernetic/mechanized Stormtrooper. Despite Disney’s hopes, they’ve ended up right back where Legends was, and it all stems from two major struggles in retroactive continuity: redundancy and perception.

Canon continuity is mutually agreed upon. Even if an IP holder says otherwise, the community holds considerable sway. That’s why everyone insists Han shot first and Vader never said “Noooooo!” at the end of Return of the Jedi, even if George Lucas tried to change that. However, that also means that when everyone is getting different information, their perceptions are skewed. My nephew might watch Rebels and think that the Death Troopers are just smaller Sentry Droids. A woman who played Commander might assume that the Dark Trooper Mk II is a new version of the Purge Trooper. It’s all incredibly redundant and leads to everyone scratching their heads, trying to pick their Dark Trooper out of the police line-up.

This might seem like a small problem, but it’s emblematic of what weighed Legends down. There was once over five different stories of the theft of the Death Star plans and dozens of retcons for the histories of everyone from Boba Fett to Princess Leia. The recent climax of The Last Jedi and its use of hyperdrives is raising questions throughout the timeline because none of these stories occurs in a vacuum; they occupy the same space. Some are bigger than others but, eventually, overlap leads to dead weight and fan confusion. The purpose of the Lucasfilm story group is to prevent these sorts of things, so one can only hope these are growing pains. Of late, the Death Troopers have been the sole unit on display, so perhaps the copies will be left to rust in the dust. Until then, would the real Dark Troopers please stand up?